The Future of Healthcare with Stephen Klasko

The future is filled with transitions to health assurance, further access to care through healthcare delivery companies, and changes to traditional providers through partnerships. Stephen Klasko, Executive in Residence at General Catalyst and former President and CEO of Jefferson Health, shared his perspective on how these elements are integral for the future of healthcare.

The Importance of Health Assurance 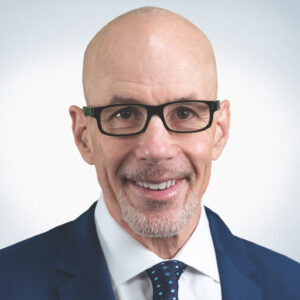 Stephen Klasko, Executive in Residence at General Catalyst and former President and CEO of Jefferson Health

According to Klasko, health assurance is transitioning from the either-or healthcare model and stopping the patient mindset.

"97% of people in this country do not wake up and say, ‘I'm a patient...’ They might have one of many chronic diseases, but they say, ‘I'm a person that would love to be able to thrive without health getting in the way,’" he said.

Seeing hospitals advertise themselves as patient centers frustrates Klasko because people are more than patients. People with chronic conditions do not want to live in an office. Rather, they want an invisible friend alongside them so they can have a normal lifestyle, he explained.

Transitioning from the Sick Care Model

When health systems call themselves patient-centric, they pigeonhole themselves by communicating patients are cared about until they are discharged. The health industry lives in a sick care patient-centric model, which is the wrong approach, he explained.

When it comes to the future, the answer for many is increasing data. However, data does not go beyond what happens in the hospital, and stores like CVS hold data about the person that hospitals lack.

In the future, Klasko hopes hospitals are not well-known, since it is where sick people go. Currently, hospitals are defined by where the sickest patients go back to, he explained.

"When we fail to keep people healthy, it is partly what's wrong with American health," Klasko said.

The Myth of the U.S. Health System

There will be a break in the healthcare system, Klasko explained, because it cannot keep spending more money.

"We have to get over this myth that we have the best healthcare system in the world," he said.

The United States' health system lacks progress that other nations already possess, and this is because hospitals are paid to have people come to the hospital.

"It's hard to get somebody to do something when their salary depends upon them not doing it," he added.

With this in mind, Klasko believes some things will not work in the country's hospitals because it is part of an impossible system promoting the sick care, high fixed-costs model.

The Need for Strategic Partnerships

One way this can change is by acquiring a Medicaid or Medicare advantage insurance company. While CEO at Jefferson Health, Klasko implemented this, which allowed the system to look at preventative measures rather than just treatments.

The greatest source of bankruptcy in America is health-related costs. Pairing this with 80.5% inflation, Americans are looking for relief. Klasko believes up-and-coming CEOs, strategic payer-provider partnerships, and the frustrations of American consumers will shift the healthcare system into a new health assurance model.

Klasko is optimistic for the future because the future doctors, nurses, and healthcare workers will have a mindset for making things more efficient.

The Role of Healthcare Delivery Organizations for the Future

As Amazon, Walmart, and others enter the health industry, it presents increased access to care for much of the country. These services may act as an intermediary and direct consumers toward care.

While accessibility through technology is important, trust is above this, according to Klasko. This was exemplified with Google Health when patients were less likely to trust the company with their data. It was a bridge too far, he explained.

Companies like Amazon Care and Transcarent offer home health services, which disrupt the healthcare system. This allows for greater access to healthcare and flexibility in receiving care.

Companies like Walmart offer further accessibility with its stores, which is competitive with Amazon's at-home services.

Walmart, for example, has approximately 100 million weekly visitors, allowing for easy access to health services. This is why Klasko sees the company as a future player alongside Amazon.

The key to progress resides in partnerships between traditional healthcare and providers with these newer players in healthcare.

The Death of the Traditional Provider and Partnership Models

Some say that the role of the traditional provider is dying as it becomes harder to bridge the gap between providers and delivery companies entering the industry. However, Klasko does not believe the claim to this extent.

The riskiest thing traditional providers can do is nothing. It is a risk to focus on inpatient revenues and compete with neighboring providers, he explained. The future lies within partnerships and thinking toward the future.

He is optimistic that continual progress with social determinants, predictive analytics, natural language processing, and at-home care is the right area to focus on for the future.