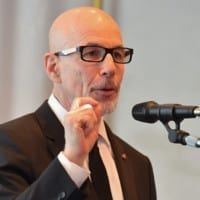 Dr. Stephen Klasko is a transformative leader and advocate for a revolution in our systems of healthcare and higher education.

As president and CEO of Philadelphia-based Thomas Jefferson University and Jefferson Health since 2013, he has steered one of the nation’s fastest growing academic health institutions based on his vision of re-imagining health care and higher education. In his five years at the helm, Jefferson has grown from a one university campus-two hospital system to, after regulatory approval of the merger with Einstein health network, a two university campus-18 hospital system with annual revenues of $6.1 billion and over 35,000 employees.

His 2018 Book, Bless This Mess: A Picture Primer for the Future of Healthcare is His 2018 Book, following on the heels of his highly successful 2016 book, WE Can Fix Healthcare, The Future Is Now.

Fast Company Magazine named Dr. Klasko in 2018 as the only healthcare executive among the “25 Most Creative People In Business.” Earlier this year, in 2019, Dr Klasko was appointed as a governor to the World Economic Forum and led several panels in Davos including “healthcare with no address” and “self-healing humans.”

He also serves on the board of Teleflex (TFX:NYSE) a global medical device company and also serves as a trustee of Lehigh University, a leading engineering and business school in Pennsylvania.

The Guild Mentality in Healthcare with Dr. Klasko

Stephen Klasko seeks to get serious about Population Health

The Future of Healthcare with Stephen Klasko