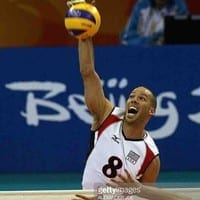 Priddy played with the national team at the Pan American Games in 1999. In 2000 he also debuted playing in Italy, for Volley Forlì. In 2001 Priddy led the team in kills (258) and digs (184), and was second on the team in blocks (41) and tied for third in service aces (14), participating in the Japan Tour, Volleyball World League, World Championship Qualifier, NORCECA Zone Championships, and the Jeep America's Cup. That year he also played for the Vienna Hotvolleys club in Austria.

Priddy rejoined the US team in late July 2002. He led the team in total points (70), kills (60) and blocks (eight) in six matches at the FIVB Volleyball Men's World Championship, and finished the season first on the team in points per game (2.98) and sixth in total points (173), had 92 kills, 66 digs, 21 blocks and 10 service aces. He also participated for the national team in the Bulgaria Tour, Greece Tour, and Florida Tour.

Priddy served as the team captain at the 2003 Pan American Games where the team placed fourth. Although battling an abdominal injury for much of the season, he still finished third on the team in kills (224) and fourth on the squad in service aces (17). He also participated in the Colorado/Nebraska Tour, Canada Tour, NORCECA Zone Championships (gold medal), and the World Cup (fourth place).

Team USA qualified for the 2004 Olympic Games in Athens, Greece, by winning the NORCECA Olympic Qualifying Tournament in Caguas, Puerto Rico. The team finished fourth overall at the Olympics. He also participated in the Japan Tour, Houston Series, USA Global Challenge (gold medal), and the Serbia and Montenegro Tour (silver medal). That year, he moved to Callipo Vibo Valentia club of southern Italy.

In 2005, he made his indoor season debut in Japan at the World Grand Champions Cup as the team USA claimed the silver medal with a record of 4-1. He played in each of the final four matches (eight out of 13 sets) and scored 27 points on 23 kills, two blocks and two service aces. In 2005–2006 he played at club level in South Korea for Daejeon Samsung Bluefangs. The following year, Priddy led his team in scoring in seven out of 12 World League matches, including 21 points against Serbia & Montenegro, and was one of the World League leaders in scoring and hitting. The U.S. team went undefeated (4-0) at the Inaugural Pan American Cup in June. Priddy obtained the high score in the first (18), third (23) and fifth (16) matches in Argentina. At club level, in 2006–2007 he was hired by Olympiacos Piraeus in Greece, after which he moved to Russia club VC Lokomotiv Novosibirsk, where he remained until 2010.

In 2008 Priddy was part of the team which won the gold medal in the 2008 Summer Olympics defeating Brazil in final. After leaving Lokomotiv, in 2010–2012 Priddy played for Russian club VC Zenit-Kazan and then for Halkbank Ankara in Turkey (2012–2013). He returned to play for European clubs only in January 2016, when he was called to replace injured Simone Parodi by Lube Cucine Civitanova.

Reid is an entrepreneur who combined his love for team and his passion for fitness in a movement called INSAND.  The concept is to get you and your friends moving together INSAND, providing a sustainable workout experience that focuses on your whole body.

He also has a video series and program called Max Potential that takes what he has learned in personal and team development and applies it to you and your team.

There are lots of stories that I could talk about of moments where players had to say no to themselves and yes to the “we”, the collective, and it was beautiful.