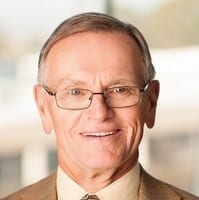 Bill Spooner has over 40 years healthcare experience, having retired after 18 years as CIO of San Diego-based Sharp HealthCare. He now serves as advisor to healthcare systems and vendor firms on strategy, innovation and performance improvement. He does a variety of IT assessments, interim leadership roles, systems selections and IT strategy assignments.

During his time at Sharp, Spooner led an aggressive IT effort that placed Sharp on the Hospitals and Health Networks Healthcare’s Most Wired™ list for 14 of its first 16 years. Numerous IT advances in both the business and patient care arenas supported Sharp’s development as the leading San Diego integrated delivery network in a highly competitive managed care environment. IT was cited for its contributions to Sharp’s 2007 Malcolm Baldrige National Quality Award. Sharp placed high on numerous “best places to work” rankings, including #6 on Computerworld’s 2013 Best Places to Work in IT.

Recipient of the 2009 John E. Gall Jr. CIO of the Year award, Spooner is a member the Healthcare Information and Management Systems Society (HIMSS) and CHIME which he served as Chair in 2006. Today he chairs CHIME’s Digital Health/Most Wired Governing Board. He received CHIME’s 2013 inaugural Public Policy Award for his HIT advocacy work and CHIME’s Legacy Award in 2018. Bill has served on Johnson City Tennessee-based Ballad Health’s I.T. Strategy Committee and Orlando-based Advent Health’s Organizational Risk and Corporate Responsibility Committee. He has served on such Boards as the Digital Pathology Association, San Diego-based Community Clinics Health Network, Healthcare IT News Editorial Board, National eHealth Collaborative (NeHC) and the San Diego Regional HIE. In 2011 he was named by Information Week as one of the “25 leaders driving the healthcare IT revolution.” He is a past member of the Healthcare Information Systems Executive Association and Healthcare Financial Management Association.

Recovering CIOs Discuss the State of Health IT

Can Health IT Drive Down Costs for Our Communities

Addressing the Evolving Threat on Cybersecurity in the 21st Century

I think the unfortunate thing is that organizations tend to increase their focus on cybersecurity after they've had a breach. But you have to hope that some would realize when their neighbor has a breach that they should take that to heart as well. You hate to require some federal regulation, but if that's what it takes, then that is what it takes. NIST is a very good framework.

You've got to take cybersecurity seriously. One of the things we've seen in the financial world is that we are forever being audited. And I would say, having been through them, they're not that rigorous. I think organizations need to be ready to subject themselves to an external assessment. Whether it's annually or every two years, you gotta take it seriously.