Semi-retired CIO, long-term member of the CHIME Opioid Task Force, and Founding Advisor at Next Wave Health Advisors, Bill Spooner, joined host Bill Russell to talk about his experiences in the industry and how they reflect the future of healthcare.

Retired after 35 years as CIO at Sharp Rees-Stealy Medical Group, Spooner has stayed involved in interim leadership and advisory roles. 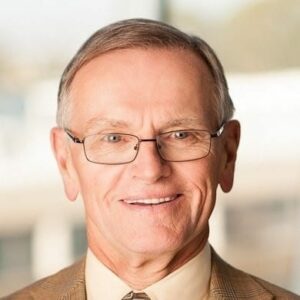 The Importance of Healthcare Cybersecurity

According to Spooner, organizations must be extremely well organized and disciplined with cybersecurity programs. If it lacks, a serious issue can occur. An example of this took place in September 2020 when the University of Vermont Medical Center was offline for a month.

In the last several years, cybersecurity has become a significant issue. It once was a necessary precaution for Spooner, but now it has become something he is passionate about. In 2006, during his time with Sharp, they experienced a low-impact security breach which led the organization to begin a cybersecurity program.

Spooner stressed the importance of cybersecurity as it is nearly impossible to give care, contact old patients, or transfer records without using a computer. There are noticeable impacts in cases where organizations are hacked for extended periods of time.

For health systems that have not reached a high level of oversight in their programs, Spooner finds some of the problem to be from their focus.

"I think the unfortunate thing is that organizations tend to increase their focus on cybersecurity after they've had a breach. But you'd have to hope that some would realize that when their neighbor has a breach, that they should take that to heart as well," he said.

According to Spooner, health systems need something that will light a fire under them as an industry, both big and small organizations alike.

While at Sharp, the organization had a pilot adoption of telehealth. In 2011, the medical group started a program where providers contacted patients to go over conditions and determine who needed in-office care. The program experienced high use due to most of its businesses being capitation reimbursement, and it continued to grow.

According to Russell, this capitation allowed for telehealth flexibility because there was payment for each patient whether they came into the office or not.

Whereas a few years ago, health systems like Sharp utilized video visits wherever it made sense; during the pandemic, most visits were done via telehealth. Now, Spooner sees health systems putting thought into the appropriate types and levels of telehealth visits.

Most companies offer telemedicine with any doctor, but this is different from a patient's established physician, according to Spooner. This is where patients can lose their established relationship and understanding with their doctor. However, there is a time where telemedicine or in-person visits are better than the other.

"Some of that is sorting out that has to happen. We know that it's going to be a permanent part of our repertoire," he said.

With the increasing popularity of telehealth, the issue of appropriate technology and infrastructure rises. Many have experienced failed telehealth calls during the pandemic.

How Telemedicine Will Transform Healthcare

The government gave incentives as part of the First Deck Action in response to the pandemic but, according to Spooner, most of the funds went towards providers buying gadgets for telehealth rather than increasing broadband. While there are discussions of additional broadband access expansion, remained is unsure if it will be enough to cover the gap.

Spooner has worried that the additional waivers and reimbursement opportunities during the pandemic will make it challenging to control healthcare costs.

"The reimbursement levels for telehealth is a good example. I'm waiting for a couple of years to see how it levels off. Are we going to be still a little under 18%? Will we be down to 60%? Or, I fear, we may be at 22%. And given the federal budget situation, that does not look good for healthcare because they'll have to squeeze it in some form or another," he said.

According to Spooner, if health IT focuses on interoperability, healthcare costs for the community could decrease. It is important to give the information to caregivers so that they can make decisions.

"There's been a lot of pressure in that, as you know. I think that's going to bring some good value. I think if we start looking though at some of the innovations that are out there and look at them thoughtfully, IT is going to help them," he said.

By 2031, Spooner believes telemedicine will be established, and the healthcare systems will have increased remote capabilities. There will be increased patient devices, which means less time spent in doctor offices.

Fostering Innovation in Your Health System

In terms of analytics, while once spreadsheets were completed by hand in budget models, organizations like Epic can now manage 100 million patient records in their database.

This extensive database will eventually make it easier for physicians to help patients with rare conditions. They will be able to search for other patients with similar problems and reproduce treatments.

According to Spooner, a significant amount of innovation will come from creative people in health systems. He has seen several small-to-mid-sized medical groups with a creative person developing effective programs.

"It's more the attitude and the risk aversion state of mind to me that will bring the innovation," he said.

There is also innovation from physicians who feel a lack of support from their organization.

"It's a question of matching all of the parties together and finding what works. Finding the organization that's willing to take the risk on them. And when you look at the health systems, there are some really interesting things happening," he said.

According to Spooner, one of the long-term impacts of the pandemic for healthcare IT is the new understanding of swiftness in decision-making.

"In times of crisis, you realize that you can make decisions a lot more quickly. And we certainly did that. And you'd like to hope that that can continue going forward because an amazing amount of work was accomplished," he said.