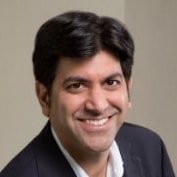 Aneesh Chopra is a government executive, leader in technological innovation and former inaugural Chief Technology Officer of the United States appointed by Barack Obama. Chopra is known for using innovative and creative approaches to solve some of the most pressing issues facing a company or even our country.

After graduation from Johns Hopkins University and the Kennedy School of Government at Harvard, Business Speaker Aneesh Chopra began work in the private sector working at a healthcare think tank called the Advisory Board Company. Soon into his career working in the private sector Chopra decided that he wanted to pursue working in public service and was appointed by Governor Tim Kaine to serve as Virginia’s Secretary of Technology.

Chopra used his position to aid families and small businesses around Virginia utilize technology to innovate, create jobs and improve the overall quality of life in for many. In 2009, President Barack Obama took note of the success Aneesh Chopra was having as Chief Technology Officer of Virginia and appointed him to become the first Chief Technology Officer of the United States. In his role as CTO Chopra was in charge of taking on some of the United States most pressing issues. Chopra used his experience and knowledge in the field of technology to help solve problems including job creation, national security and lowering health care costs.

Since his time as the CTO of the United States, Aneesh Chopra has run for the Democratic nomination for Lieutenant Governor of Virginia and authored the book Innovative State: How New Technologies Can Transform Government. He is currently a Senior Advisor at Albright Stonebridge Group.

Healthcare in the 21st Century with Aneesh Chopra

Healthcare in the 21st Century

LiveStream: Funding the Future of Telehealth

How has the Pandemic Elevated Gov't Healthcare Roles

We have this legislative and executive branch dance that requires a lot of moving parts in the pandemic. We realized we've got a lot of authorities on the books today but we have much, much more that we can do to make the healthcare system work better.

You've got multiple hats on how a government thinks about healthcare and large actions must go through Congress. And so we wait … for that once in a generation absolute knock 'em, sock, 'em opportunity, like the Affordable Care Act.