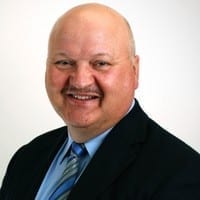 For decades, Randy McCleese has successfully bridged seemingly disparate communities. McCleese, CIO of Methodist Hospital in Henderson, Ky., has been welcomed at White House events and rural hospital board meetings. He has addressed policy makers in Washington, D.C., executives in health systems, his peers at health IT conferences and IT students at his local university. As a CIO, he has led strategic initiatives to bring innovations that improve efficiency and patient care to small and rural hospitals. And he has managed to do these herculean tasks – with limited resources – while also devoting countless hours to organizations that share his passion for healthcare IT and professional excellence.

His outstanding service has earned him the 2017 John E. Gall Jr. CIO of the Year award. The award was announced today by the College of Healthcare Information Management Executives (CHIME) and the Healthcare Information and Management Systems Society (HIMSS). The award is given annually to a CIO who has shown significant leadership and commitment to the healthcare industry during his or her career. The recipient is selected jointly by the boards of CHIME and HIMSS.

As a CIO in a small and rural healthcare system, McCleese faces the same regulatory and institutional demands as his colleagues in large, urban systems. But he also must consider the needs of patients in remote towns and how to sustain those facilities and services. “My sights are set on not just what is going on with technology or in the hospitals,” he said. “I am heavily involved in the ambulatory area as well, in the clinics we have. Most of those patients can’t afford to drive 25 to 30 miles, or they are not able to drive 25 to 30 miles to the next biggest town.”

In April of 2017, McCleese joined Methodist, a 192-bed acute care hospital, a 25-bed critical access hospital and a 19-practice physician network, where he oversees all IT functions. He previously served as vice president of information services and CIO at St. Claire Regional Medical Center in Morehead, Ky. He has been a member of CHIME since 1998 and an active participant in CHIME’s public policy initiatives since the program’s inception about a decade ago. He has held numerous leadership positions, including a member of the CHIME Board of Trustees from 2012-2015; CHIME Board chair in 2014; CHIME Foundation Board chair in 2015; and chair of the CHIME Policy Steering Committee in 2015.

In 2016, he won both the CHIME Federal Public Policy Award for CIO Leadership and the Outstanding Service Award. He has been on the CHIME Certified Healthcare CIO advisory panel and participated in the development of the CHIME Foundation Certified Healthcare Executive program. He became a CHIME fellow in 2012 and achieved CHIME lifetime status in 2014.

“Randy proves that you don’t have to be from a large organization to have a big impact in our industry,” said Russell Branzell, president and CEO of CHIME. “Randy has worked tirelessly in Washington on behalf of small and rural health systems by educating decision makers about their needs and constraints. He also helped broaden the perspective of our members and showed us how we can do more with less. This award is well-deserved recognition for his dedication and generosity.”

McCleese joined HIMSS in 1997 and became a HIMSS fellow in 2005. He has been an active member of the Kentucky Bluegrass Chapter of HIMSS, serving on the board from 2002-2009, and as president from 2004-2005. In 2008, he initiated the chapter’s Kentucky Advocacy Day at the state legislature, an annual visit to state legislators that continues today. He also served as the vice chair of the national HIMSS Advocacy Committee in 2008, the same year he received the HIMSS Founders Leadership Award.

“Randy McCleese represents the highest standards of leadership, working with local, regional and state representatives to advocate and advance the value of digital technologies in improving the health of patients at his hospital and beyond,” said Hal Wolf III, president and CEO of HIMSS.

He has been active regionally and locally, too, helping to found the Northeast Kentucky Regional Health Information Organization and serving on the Kentucky Health Information Exchange (KHIE). In 2012, he was invited to represent KHIE at a White House town hall meeting on health IT, where he and 80 other healthcare IT leaders were recognized for their accomplishments. He also has taught IT courses as an adjunct faculty member at Morehead State University.

McCleese favors collaboration and focuses on the positive, which motivates those around him. “When you accentuate the positive, it multiplies itself and people do better,” he observed. He will be honored on March 5 at the 2018 CHIME-HIMSS CIO Forum in Las Vegas and will officially receive the award at the HIMSS18 conference that runs from March 5-9 in Las Vegas. The award is named for John E. Gall Jr., who pioneered implementation of the first fully integrated medical system in the world in El Camino Hospital in California in the 1960s.

One of the things that has surprised me during this pandemic is the ability of patients being able to do virtual visits.

We’re making changes and working. We’re making them as we go because we don’t always know what we’re going to need to do.