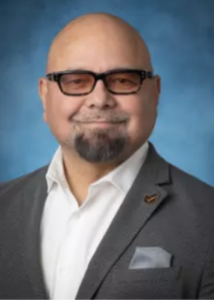 Kevin Torres graduated from California State University, Long Beach with a Bachelor of Science degree and a Masters in Public Administration with a healthcare concentration. He began his career in at Santa Marta Hospital (Carondelet Health) as a Data Systems Operator and later accepted a position as an Information Systems Coordinator at San Pedro Peninsula Hospital, and was later promoted to Information Systems Manager. As a result of a merger with Little Company of Mary Health Services (Providence Health System) in 1993, Mr. Torres was promoted to Corporate Director of Information Systems. He was responsible for implementing an information system to support the vertical integration strategy of the health delivery network. In June of 1998, Kevin became Executive Director of Information Services for Long Beach Memorial Medical Center, and is a key member of the senior executive management team.

In 2005, Kevin was promoted to V.P. Information Technology for MemorialCare with responsibilities for all entities within the MemorialCare Health System. He was on the faculty (as an Adjunct Professor) at California State University, Long Beach (2002-2012) in the HealthCare Administration program and has created many internship opportunities. He has published several Information Technology articles and co-authored an article in the International Journal of Public Administration. Kevin is on the Advisory Board for The Children’s Clinic of Long Beach and is an active fund raiser for the March of Dimes and was designated Orange County “top walker/fundraiser” three years in a row. In 2016, Kevin was featured in Cisco’s case study for Hyper-converged technology:  https://www.youtube.com/watch?v=VshvTXyhC0U