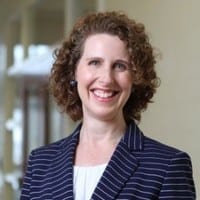 Tricia Julian is chief information officer for Baptist Health. In this role, she is responsible for leading and developing information technology structures across the system, including overseeing the continued implementation and refinement of Baptist’s electronic health record (EHR) system.

Julian joined Baptist in 2011 as Ambulatory IT director, where she built an Ambulatory IT team and led the implementation of Allscripts practice management and EHR systems in employed physicians’ practices. In that position, she also formed a governance committee with physician representation from all regions to guide the direction of IT.

In her position as executive director, she has helped lead the EHR implementation in each of Baptist’s seven hospitals and 250 ambulatory locations in Kentucky, which has included managing vendor relationships, remaining under budget and on schedule, and overseeing training of 14,000 employees across the state, among other efforts.

Julian has held leadership roles for electronic health record implementations in four different healthcare organizations dating back to 2004. Prior to joining Baptist Health, she served as chief operating officer and as director of operations for The Corvallis Clinic in Corvallis, Oregon, from 2007 to 2011. In addition, she served as director of information technology for the Welborn Clinic in Evansville, Indiana, and worked in managerial roles at the Arnett Clinic in Lafayette, Indiana.

Julian earned a bachelor’s degree from Purdue University and an MBA with healthcare specialization from Indiana Wesleyan University. She and her husband have three teen-age children. She is active in various ministries within her church community and enjoys running and tandem cycling.

A Team Approach to Health IT from Baptist Health KY