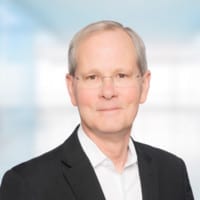 John is the Executive in Residence at Harvard Medical School.

John joined Cerner in 2015 as a part of the Siemens Heath Services acquisition, where he was chief executive officer. Prior to Siemens, John was vice president and chief information officer at Partners HealthCare; he also previously served as vice president of information systems at Brigham and Women’s Hospital.

John was the founding chair of the College of Healthcare Information Management Executives (CHIME) and the past-president of the Healthcare Information and Management Systems Society (HIMSS). He has served on numerous boards including; eHealth Initiative, the American Telemedicine Association (ATA), and the American Medical Informatics Association (AMIA). He is a fellow of CHIME, HIMSS and the American College of Medical Informatics. He is a former senior advisor to the Office of the National Coordinator for Health Information Technology (ONC).

John received his Ph.D. from the University of Minnesota. He has written over 200 articles and three books on the strategic application of IT in health care, including the most widely used textbook on the topic, “Healthcare Information Systems: A Practical Approach for Health Care.”

"With a Lowercase R": How to Transition to Retirement While Staying Engaged and Involved