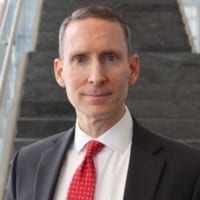 Daniel J. Barchi, MEM, is the Group Senior Vice President & Chief Information Officer of NewYork-Presbyterian. In this role, he oversees the strategic vision and management of information technology, innovation, analytics, artificial intelligence, telemedicine, and pharmacy. Mr. Barchi joined NewYork-Presbyterian in 2015 and previously served as Senior Vice President and Chief Information Officer of Yale New Haven Health System and Yale School of Medicine, where he led a number of important initiatives, including implementation of the electronic medical record across three hospitals, and the roll-out of a secure iPhone application for physician communication. He also served as Senior Vice President and Chief Information Officer of Carilion Health System. Mr. Barchi holds a Bachelor of Science from the United States Naval Academy at Annapolis as well as a Master of Engineering Management from Old Dominion University. He served as a Brigade Commander while at the U.S. Naval Academy and was twice awarded the Navy Commendation Medal for superior leadership.

Learning Servant Leadership from the Naval Academy with Daniel Barchi

I'm not a fan of creating the perfect plan, putting the business plan around it, getting approval, and then flipping a switch and hoping everything goes well. I think that's a recipe for a disaster because you make so many assumptions along the way about how things are going to work.