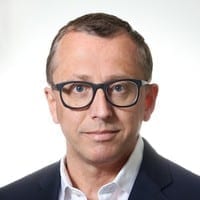 Charlie Lougheed serves in a number of leadership roles in both commercial and non-profit organizations where technology enables positive disruption and good in the world including Axuall, Unify Project, Friends of Breakthrough Schools, Galen Foundation, and The Lougheed Initiative.

Charlie co-founded and co-funded Explorys, now IBM Watson, in 2009 as a spin-off from the Cleveland Clinic. In six years, the company became the leader in healthcare big data and value-based-care analytics, spanning 26 healthcare networks, 60 hospitals, and 60 million patients across the US.

As president of Explorys, Charlie led key areas within the company including strategy, product design, platform engineering, client services, and marketing. After the IBM acquisition of Explorys, he led the strategic consulting and implementation efforts for Watson Health’s value based care initiatives.

Prior to Explorys, Charlie cofounded Everstream in 1999 which later became the market leader in broadband and content analytics before being acquired by Concurrent (NASDAQ: CCUR) in 2005. There he served as CTO and later President as the company enabling its clients to leverage their data to exponentially scale their networks and broker better deals with their content providers.

Charlie is also an active leader in his community serving as founder and Chairman of The Lougheed Initiative Foundation, Vice Chairman of Friends of Breakthrough Schools, and Chairman of the Galen Foundation and PeopleBeatingCancer.org. He is a partner in 23Bell, the investment group that led the initial round of financing for Explorys, as well as a member of the North Coast Angel Fund.

Charlie Lougheed on Blockchain Roadblocks and Fintech Lessons for Healthcare

Charlie Lougheed on Blockchain Roadblocks and Fintech Lessons for Healthcare