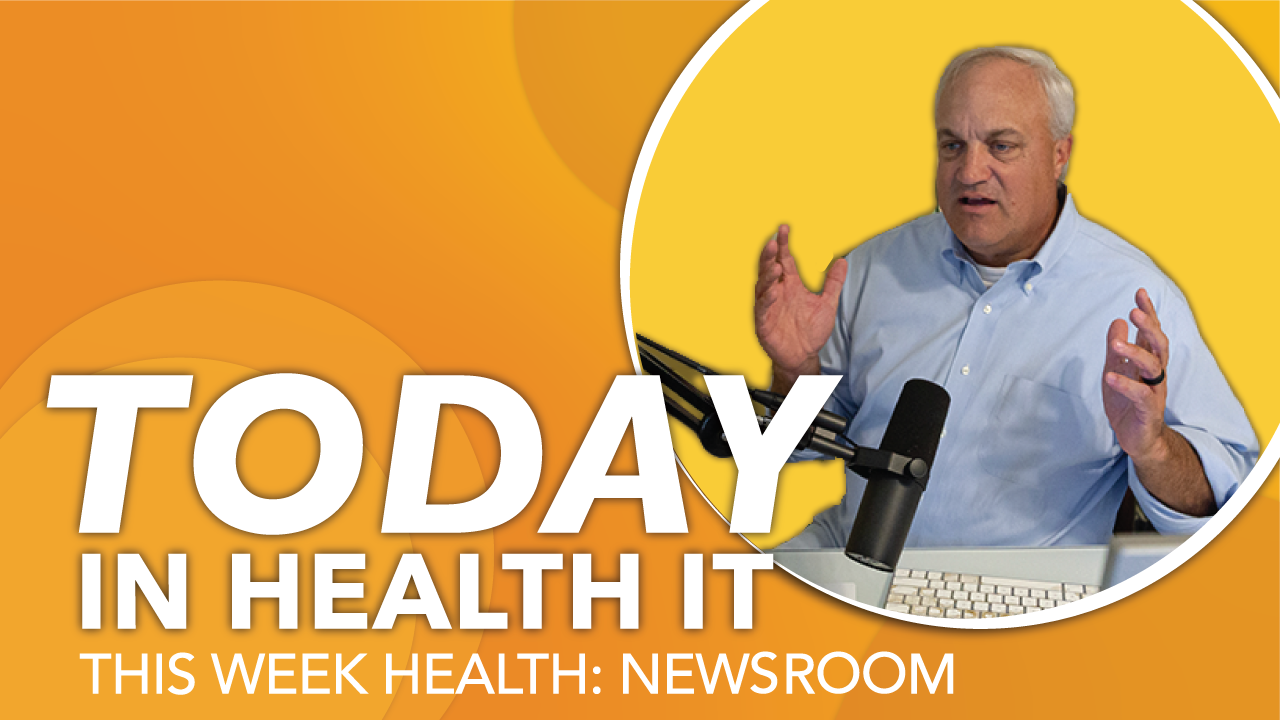 In this HealthSystemCIO.com article John Halamka and Paul Cerrato ask the question, what happened and where are we at?

Today in health it, where is the blockchain revolution? My name is bill Russell. I'm a former CIO for a 16 hospital system and creator of this week and health. It. A set of channels dedicated to keeping health it staff current and engaged. We want to thank our show sponsors who are investing in developing the next generation of health leaders, Gordian dynamics, Quill health towel, site nuance.

Canon medical and current health. Check them out at this week. health.com/today. All right. Before we get to the show, we're doing a webinar today is the day we're going to do it at 2:00 PM Eastern time. And we are going to do a webinar entitled, , stories from the trenches.

And we're going to talk to some cybersecurity first responders. And I'm really excited about this conversation. We did a pre-call on Tuesday of this week. And some really exciting stories. I learned a ton just in the pre-call and I'm going to try to bring that out in today's webinar. , we are going to explore. What we're seeing on the front lines. And we're also going to talk about one of the biggest targets in health care, which is active directory. , join us today. 2:00 PM Eastern time. Sign up at this week. health.com/trenches. Love to see you there. All right, let's get to today's story. It's a interesting it's on health system, cio.com.

And John , guests several times on this week and health it. , wrote an article on a, I think he co-wrote it with, , Paul Serrato. Who is senior research analyst for Mayo clinic platform. And has co-written some materials with John over the years, a great researcher. And, they talk about this blockchain revolution. I'm going to give you some of the excerpts because I think it's really well written.

So it starts out with simply put blockchain, holds the potential to revolutionize healthcare. How many times have we heard that? Those words of praise from Forbes magazine, suggest that this technology is poised to have a major impact. On clinicians and healthcare executives worldwide. Is such enthusiasm justified is the question that John and Paul. Puts out there.

And I think it's a valid question.

We're a couple of years past maybe the peak of the hype cycle, but it's still, they're still lingering. So let's talk about it. In theory, the technology could enhance security controls around health record access. To understand these potential benefits. It helps to understand the basics about the technology.

It also helps to understand what it's not, it's not a traditional database in which the entire health record. From the patient is physically located in one place. All right. So that's traditionally what we've done. We've aggregated all this data. It's it's what. , we do for data science projects is what we do.

For, , just a lot of things. It's we're we're IBM Watson aggregated data. , we're probably seeing that at, at the Google platform as well. They're aggregating data, true vet is probably going to aggregate data. It's just our, our, our fundamental thought is we bring all this together. We don't have to worry about latency and we can get access to the data.

So those are two of the major things right there, right? Distributed and immutable. Let's go into it. According to NIST, blockchain refers to tamper evident and tamper resistant, digital ledgers. Implemented in a distributed location without a central repository and usually without a central authority.

A bank company or government at its basic level, it enables a community of users to record transactions in a shared ledger. Within that community, such that under normal operation, the blockchain network, no transaction can be changed. Once published the chain of data. Or transactions are called blocks and they are linked together with encrypted signatures called hashes.

The ledger contains all the data, all the patient data in this case. That are shared by those who are given permission to see it, but not alter the entries. One of the reasons I really like this article is they go into that kind of detail. Right. So if you're not really familiar with blockchain, that's a fair amount of detail into how it functioned.

They launched a blockchain technology to secure the health records of the patients and in the UK to hospitals where the first deployed blockchain technologies are monitor storage and supply of temperature sensitive. COVID-19 vaccines. A Reuters report explains the tech will bolster record keeping and data sharing across supply chains. . For Britain's national health service NHS.

So the promise of blockchain in healthcare is obviously you get this trusted network, this immutable record. That you can create across a distributed ledger, right. And the distributed ledger aspect of it makes it more secure, more robust. , more resistant to attack. And in this hyper vigilant world that we have to live in right now, that is very compelling. The other thing is you have these contracts, which reside on top of it. And so you have the automation of these implied contracts that happen between editors all the time.

And you can essentially create this trust mechanism for these contracts. Again, you're just reducing the amount of overhead and burden that exists between these administrative entities. And then a lot of times in healthcare, these are done by individuals, by people. And we're going to be able to move these things down to computer. So there's a lot of promise, promise in the millions, if not billions of dollars in savings within healthcare. All right. So what happened?

Such mixed results. Beg the question. What happened to the revolution once predicted by blockchain enthusiasts? One reason is a lack of scalability. In addition, there are already trusted agencies in the healthcare ecosystem. Another problem is there's no significant incentive and I think that's the biggest one financial or otherwise.

To alter existing patient records. Equally important is the fact that there are other solutions to check the integrity. Of data and to handle database immutability. One way to address these issues. It's these blockchain to double-check the integrity of medical records stored in more traditional databases, such records often have different origins.

And provenance from patients from different types of laboratories. For example, having an integrity check allows the physician and or patient to understand where the data came from with certainty, that the data has integrity. Like many revolutions blockchain continues to face problems. When implemented in the real world, the true value will take time and patience to determine, , to be sure there are some blockchain.

, solutions that are out there, we've talked to some of them on the show. They're pretty interesting. And worth looking at, but you know, we don't implement technology for technology's sake. . I think what you're going to see is there's going to be solutions that rise up. They utilize blockchain, they offer a significant.

That's all for today. Do you know, if someone that might benefit from our channel, please forward them a note. They can scrubbing our website this week, health.com or wherever you listen to podcasts, apple, Google, overcast, Spotify, Stitcher. You get the picture. We are everywhere. Don't forget to sign up for our webinar today. And if you can't make it today, go ahead and sign up. Anyway. You'll get the on demand webinar. Once it's complete.

We want to thank our channel sponsors who are investing in our mission to develop the next generation of health leaders. Gordian dynamics, Quill health tau site nuance, Canon medical, and ???? current health. Check them out at this week. health.com/today. Thanks for listening that's all for now