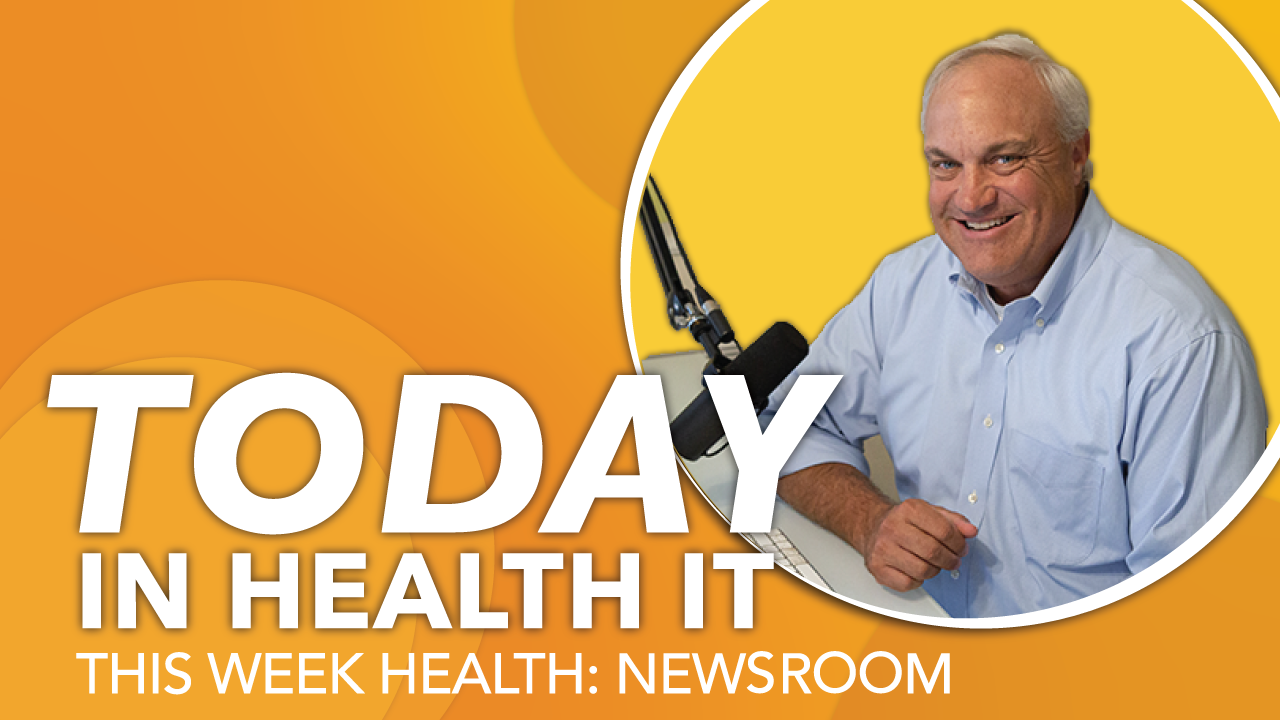 I listened to an interview of Elon Musk this morning. I selected some of what I learned which could be applied to healthcare. Hope you enjoy.

Today in health. It, what I learned from Elon Musk this morning, my name is bill Russell. I'm a former CIO for a 16 hospital system and creator of this week health, a set of channels dedicated to keeping health it staff current. And engaged. We want to thank our show sponsors who are investing in developing the next generation of health leaders.

, he is definitely somebody worth, , listening to, , if, for no other reason. He, , sparks ideas. He sparks thought he sparks conversation. I give you an example. In terms of innovation. They, , built the model three and the model three, is there a lowest priced entry into the electrical?

, vehicle market. And, , the, , review on the car was generally extremely good except for the body and the body. Had 110 different parts welded together, molded together, that kind of stuff. And a writer, , took him to task and told him exactly why it was bad. , And those kind of things said some good things about it, but it essentially said, you know, this, this body is a mess.

And Elon and the team stepped back and said, you know, , he's spot on. All right. So there's one taking criticism. He's spot on. He's right. We shouldn't have this many parts. And Elan got to thinking about it. And he was looking at some toys and he thought. Why can't we do the body of the model three.

Like they do toys, right. And a mold like a cast cast molding of the entire body. And, , you said, you know, they do it for toys. It's really inexpensive to do for toys and it's highly durable . I wonder if we can do it.

So we went to the team. And he said, Would it be possible to do this? And they sort of looked at him and said, oh boy, we don't know. It's like, well, will the laws of physics support this. And their answer was yeah, probably.

, let's research it. They went out and they found six companies that you, , moldings of this type. And they essentially went to them and said, could we do a car body? With this same technology and five of them said, no, it's not possible. And one of them said, in theory, it could be possible. And he said, I'll take that as a yes.

And sure enough, they did the work and they were able to bring the body down from 110 parts. Down to two parts, essentially. It's it's too. , sections the front and the back molded and then joined together. And he talks about how that simplified the entire environment. And I love that part of the conversation because it's a great example of problem solving. It's great example of innovation, massive innovation, by the way, when you go from 110.

Moving parts down to. To two moving parts, it's simplifies , the construction process, the manufacturing process, , it simplifies the maintenance. It simplifies just a ton of things. , in the overall design and build of the car. And so I love that. And I think that's something we can take away from this.

And we have to take it to the next level, which is to. You know, in Elan's case, he went out and talked to those six, , molding companies. Identified the one that said it might work and then went down that path with that one company. And in our case, I think a lot of times we get caught up in the bureaucracy and the difficultness of it, of making, , healthcare, a consumer friendly.

Type of endeavor. And so, you know, one of the things is the inquisitiveness. Another is, , looking to other industries. , you know, at what's possible. And then applying that to our industry. I think another thing I learned from the talk this morning, it's bias. It's an hour and a half long. So it's, there's a lot of stuff in it. I'm just going to cover a handful of things. I'll put a link.

In the show notes to this. , one is, , optimism. The need for optimism, the power of optimism. And he talked about this in the context of, , birth rates. Around the world. And he said, you know, birth rates around the world, there's an a country. That's doing well in this, and essentially what we are doing as a, as a species is we're dying off.

With low birth rates. , And the country that most epitomise is, this is Japan. And, , they talk about people not wanting to have children. , because they don't want to bring them into this world or whatever it is. And he said, you know, you just have to look through history and realize this is one of the best times in history to be alive.

The other thing Elon Musk talked about was the allocation of capital. And this was an interesting part of the conversation. What he was talking about is that the market is off and the market's off significantly. We're probably heading towards a recession. It feels like it's already started. We already have our first quarter of a negative two.

GDP growth. We'll probably have another quarter and then we can officially call it a recession. And, , he was talking about how this is good thing. One of the things that happens in markets over time is that you have a inefficient allocation of capital. What does that mean? That means that you have all this money, all this resources being spent on things that aren't effective and spend on things that don't provide enough value back to humanity, , goods and services to the people that they're trying to serve. But there's so much money floating around.

And so you have a contraction. One of the things happens in a contraction is people get more particular about what they're investing in and where the money goes. And they look at it and they say, you know what, I'm not going to this more speculative. , type of thing. I'm not going to invest in because I don't believe it's heading in the right direction.

It's not just money chasing any silly idea that happens to be out there. , And I like this idea of, of that, because I believe that's, what's going to happen in health systems right now as well. I believe that, we have been wondering, how are we going to continue with this sense of urgency?

And so there's going to be a, an allocation of resources to the things that matter. So that's that focus? That's a sense of urgency. We've been asking how are we going to maintain it? And that's one of the ways we maintain it. You know, as a corollary, as he was talking about this, and I'm not sure I'm going to be able to make this connection. Well,

, but it's what I thought about. , nurses are enjoying, I believe. The most influence they've ever had in this industry that I can think of, or at least since I've been at it, let's just say that. And part of it is due to markets. They've been not treated. , as, as valued as they should have been in the equation.

And, , because they were taken for granted the pandemic hits, we have this very difficult time. , There's a shortage of nurses. Because of the environment. We have a lot of nurses who are coming together and they are letting their views be known. There's votes of no confidence going on. There are walkouts going on. There are those kinds of things. So you have, , people organizing, you have nurses organizing, , you have nurses leaving.

In record numbers and saying, you know what, I'm, I'm going to leave the profession potentially. , and others looking at it, going. You know what? I don't think it's fair that a traveling nurse is coming in here and making twice as much as me. I want to become a traveling nurse and make more money.

And they are doing that. And so they have more leverage in this industry than they ever have. And as a result of that, what you're seeing is these financials. Are depicting this challenge that health systems have right now, which is they are paying far more for, , labor clinicians. Well, actually all, all clinicians, but specifically for nurses, they're paying more than they ever have before.

And the other thing is you're looking at a situation where these numbers are not sustainable. Long-term you can't have these kinds of half. Billion dollar losses at major health systems for any period of time. And by the way, it's more acute. , there's the smaller, the health system gets, you know, they might be only be losing $10 million a month, but that $10 million represents a significant percentage of the overall.

A net revenue. And I think this was just, this is how markets correct themselves over time. Yes. It's been a long time coming for the nurses to get their chance to have a conversation. And be a part of the conversation and say, look, we are part of the solution. And you have not elevated us to the right levels within your organization. Now is the time.

, to do that. , that happens over time. It happens as a result of markets

And right now in every boardroom across this country. There's a conversation going about nurses. How to make the work environment more attractive, how to, , reduce the safety issues that nurses have to face, how to reduce the difficult situations where nurses are confronted with patients that are ornery and whatever.

, how to address nurse pay, how to address the challenges with technology that nurses have. So there's, there's, there's this opportunity. Right now for nurses to be front and center and be a part of that conversation. , but also understanding that this is not sustainable. There there's no way that the, these, , labor rates, at least it would appear based on the financial operating numbers that are coming forward.

That this is sustainable, but this is what happens. Anyway,

And then it swings to a more sustainable solution. Long-term. , these are just some of the things I learned. This morning after listening to that interview. I, as you know, I developed podcasts. I listened to podcasts because I, I want to, , , learn as much as I possibly can. So I thought I would share it with you that's all for today. If you know someone that might benefit from our channel, please forward them a note. They can subscribe on our website this weekend.

health.com or wherever you listen to podcasts, APOE, Google, overcast, Spotify, Stitcher. You get the picture. We are everywhere. We want to thank our channel sponsors who are investing in our mission to develop the next generation of health leaders, Gordian dynamics, Quill health tau site nuance, Canon medical, and ???? current health. Check them out at this week. health.com/today. Thanks for listening that's all for now 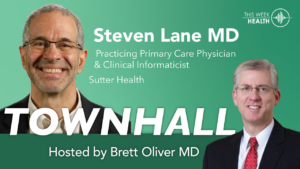