Today we look back at a TownHall episode .. Craig Richardville, Chief Digital and Information Officer at Intermountain Healthcare interviews me on my predictions for Health IT.

Today in health, it I'm on vacation. So I'm going to be highlighting some of the great content we have on town hall. And so this is going to be an episode from a town hall host. And their guest more on that in a minute. My name is bill Russell. I'm a former CIO for a 16 hospital system and creator of this week health. A set of channels dedicated to keeping health it staff current and engaged. We would think our show sponsors who are investing in developing the next generation of health leaders, accordion dynamics, Quill health tau site nuance.

Canon medical and current health. Check them out at this week. health.com/today. All right, I'm on vacation this week. So I'm taking this time to highlight the great interviews that our hosts have done on the town hall show.

Today, you're going to hear from me. Craig Richmondville decided he wanted to interview me. And it's not often I get to be on the other side of the microphone. So I accepted his invitation and he asked me a couple of questions here. About uh, the things that we expect to see in healthcare the next uh next year or so so here you go

That we're all looking for advice and we've all made mistakes throughout our.

because you have an example,

that you learned from, or maybe you took a left when you should have taken a right or vice versa. What, what, what would you, what, what advice would you give.

around that, and these are

hard examples to give.

but the first is when,

when you become a CIO,

First of all a CIO

I was spending $280 million a year. I personally wasn't spending it. It had to go through governance. Don't anyone get all worked up because I just said I spent $280 million, but that's how they treat you. When you go to a conference, they treat you like you,

health system he's probably got $300 million. He's going to spend. next year And they treat you that way and, and,

you could easily let that go to your head and,

it's, it's good to remain humble and not let that go to your head. And,

I would say the

longer you're in there the more you might think that you're as funny as the laughs that you're getting and all those things.

but the, the story I will tell on that is the day after I took my severance and left St. Joe's,

my phone stopped ringing and my email box was as clean as it's ever.

all those people that you think, Hey, these are my friends and, and those kinds of thing they are your friends

there's a lot of people that are your colleagues,

I learned that for like the fourth time after I left being a CIO and the phone stopped ringing and I thought all these people were my friends. I'm like, I, I knew better.

one of the things that my wife and I always say is,

err, on the side of grace, There have been people who have wronged me every which way, but Sunday in healthcare and, and said things behind my back and that kind of stuff. And people are like, well, yeah, w what did you have the microphone? What are you going to do to them?

That's a better side to live. from Than to live from

here are the list of people I'm never going to interview because they wronged me in some way.

Yeah. Thanks. Bill that's really touching. And going back to your

first comment early on in my career, you kind of realize I used to take my badge. I always turned it upside down or stick it in my coat pocket so that people didn't know who I was or where I worked,

but just kind of treated me more as a person versus a role.

I got one more question for you. So this is getting a little bit more to some content. So as you interview and chat with such a diverse group of leaders,

and in building your crystal ball,

What are the 1, 2, 3 things that you are predicting that has a high likelihood of adopting within healthcare the next five years. Technology or otherwise. How do you see it changing?

This labor shortage isn't going away, especially the clinical labor shortage isn't going away. So I am specifically interviewing and looking for technologies that are going to address that. Reduce the need for labor. It used to be we were worried that the the clinicians or the nurses were going to respond and say, you're trying to take my job. Now, what they're saying is help. It's a completely different conversation. Automation in any area, especially I believe that we are going to start thinking about our infrastructure as a platform. And I know that that's a buzzword, but all the elements that a platform has, if we start thinking about our internal IT infrastructure, as that we should think about it, that it can grow and shrink as we need it.

It should be addressable via APIs. Our infrastructure, addressable via API so that we can, we can grow it or shrink it or reprovision or all those things via code because where security is going right now, we're going to need to do that. You almost have to think of your infrastructure as a platform. A code block that is malleable to what you need to do, because I think healthcare is going to continue to change. We're going to continue to be asked to do things we haven't done before.

Anywhere that somebody is is where we should take healthcare. So those are two areas. Then the other area, I don't know how it's ever going to get funded. The whole social determinants of health. , that's the hardest thing.

And I think it's going to take those for lack of a better term, more well off, scaled health systems to build the models and then show the rest of us how we can do it. And maybe even develop the core technologies and give it to us to do because there doesn't seem to be funding for it.

We need leaders to get out there and innovate and drive down the cost so the rest of us can do it. We've got to drive health and not continue to rely on sick care moving forward.

So, I didn't know if you were missing me on vacation, but thought I'd thrown in an interview with someone interviewing me. There you have it.

So that's all for today. If you know someone that might benefit from our channel, please forward them a note. They can subscribe on our website this week health. Dot com or wherever you listen to podcasts, apple, Google, overcast, Spotify, Stitcher, you get the picture. We are everywhere. We want to thank our channel sponsors who are invested in our mission to develop the next generation of health leaders.

Gordian dynamics, Quill health tau site nuance, Canon medical, and 📍 current health. Check them out at this week. health.com/today. Thanks for listening. That's all for now 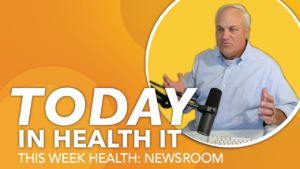 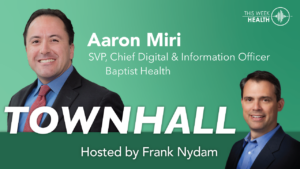 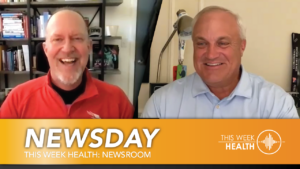