We have a webinar today at 1:00ET. Join us as we discuss medical device security. This morning a sneak peek.

Today in health, it medical device security. My name is bill Russell. I'm a former CIO for a 16 hospital system and creator of this week health. I sent a channels dedicated to keeping health it staff current and engaged. We want to thank our show sponsors who are investing in developing the next generation of health leaders, Gordian dynamics, Quill health tau site nuance, Canon medical.

I put a poll out on LinkedIn. And I usually do it on a Monday. Actually. I put a poll out there every Monday. So if you get a chance to go out and check out those poles, And then I do them for about three days. They close on the day of the webinar and then I pull the information and we use it in the webinar, but you're going to get a little sneak peak.

All right. Here you go. , about 6% said a hundred percent. And, , I disagree with that a thousand percent having heavy. Been a CIO for 16 hospital system. , those medical devices are squirreled away in a lot of different places. So a hundred percent is almost, , not even possible. And I'm not sure many CEOs would agree with a hundred percent 90% got the second most votes at 16%.

, 80% got about 6% of the boats and 71% said less than that. I've, , I've been doing a lot of interviews this week and talking to CEO's and I mentioned this pole. A couple of And in each case, they said, oh, it's definitely less. And so that rings true with people , that the. The percentage of medical devices, accurately inventory. So why, why is that what's going on to, to not be able to find.

The medical devices while a couple of things are going on. One is they are a scarce resource in the hospital. So from time to time, you have clinicians hoarding them, right? So they get stuck in places so that, , you know, they don't walk away at night and they're available to them the next day.

And they stay on the floor where they want them to stay and those kinds of things. So you have , that going on. , Quite frankly, you just have them getting lost. They are on wheels. So , it's not like they're fixed. , and, , and a lot of them, we have not invested in the software to accurately track and monitor these devices. That's what we're going to talk about today. We're going to talk about, ,

That aspect I mean, w we we'll touch on why we can't. Accurately inventory these devices and where they are in the hospital and what impact this has on the health system itself. But then we're going to dive quickly into. , what does that mean?

Would that mean for your health system? , because each one of these systems is a clinical device. They have patches because they are, technology related. They're IP devices. They're on your network. , and so they have patches just like, you know, if you're patching your phone every so often those devices need to be patched.

Every so often. , you have, , , notices that you get as a health system. Sometimes those notices go. Far-flung places in the health system. They don't always end up at it or at the biomed organization. And we're going to talk a little bit about that. Where does biomed. Belong cause it doesn't always belong.

In it. In fact, , I would say it's a 50 50 shot, whether biomed. Belongs in it, but the maintenance of those devices is very similar to the maintenance we do for a end point devices. And we do for servers and whatnot. , so we, we do have the tools , and the process and procedures to keep these things current.

Whereas in some cases, biomed teams struggle with , that a set of processes. So we're going to delve into that a little bit. And what it takes to, to be secure, to have those devices accurately inventoried, , to be able to know where we're at at any given time.

It took us about a month. We cracked the case. And they were showing up on eBay. Somebody was making a little extra money selling on eBay. So medical devices is an interesting nut to crack and it is absolutely a security concern within the health system. Something we have to get our arms around. As quickly as we can. So one o'clock today, Eastern. If you want to sign up, hit our website this week, health.com.

If you want your questions to be answered, go ahead and fill them out in the registration. , we take questions ahead of time because, , that way I can make sure that we weave them into the conversation. With our panelists. So love to have you there please go ahead and sign up. That's all for today. If you know someone that might benefit from our channel, please forward them a note. They can subscribe on our website this week. health.com.

Or wherever you listen to podcast apple, Google, overcast, Spotify, Stitcher, and the list goes on and on. We want to thank our channel sponsors who are invested in our mission to develop the next generation of health leaders, Gordian dynamics, Quill health. Tau site nuance, Canon medical, and 📍 current health. Check them out at this week. health.com/today.

Thanks for listening. That's all for 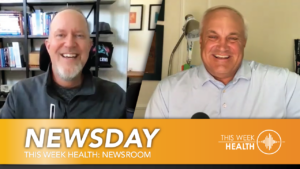 Newsday - 2022 Hits Healthcare Hard Financially, How are we Dealing with Rising Expenses & Pressure?