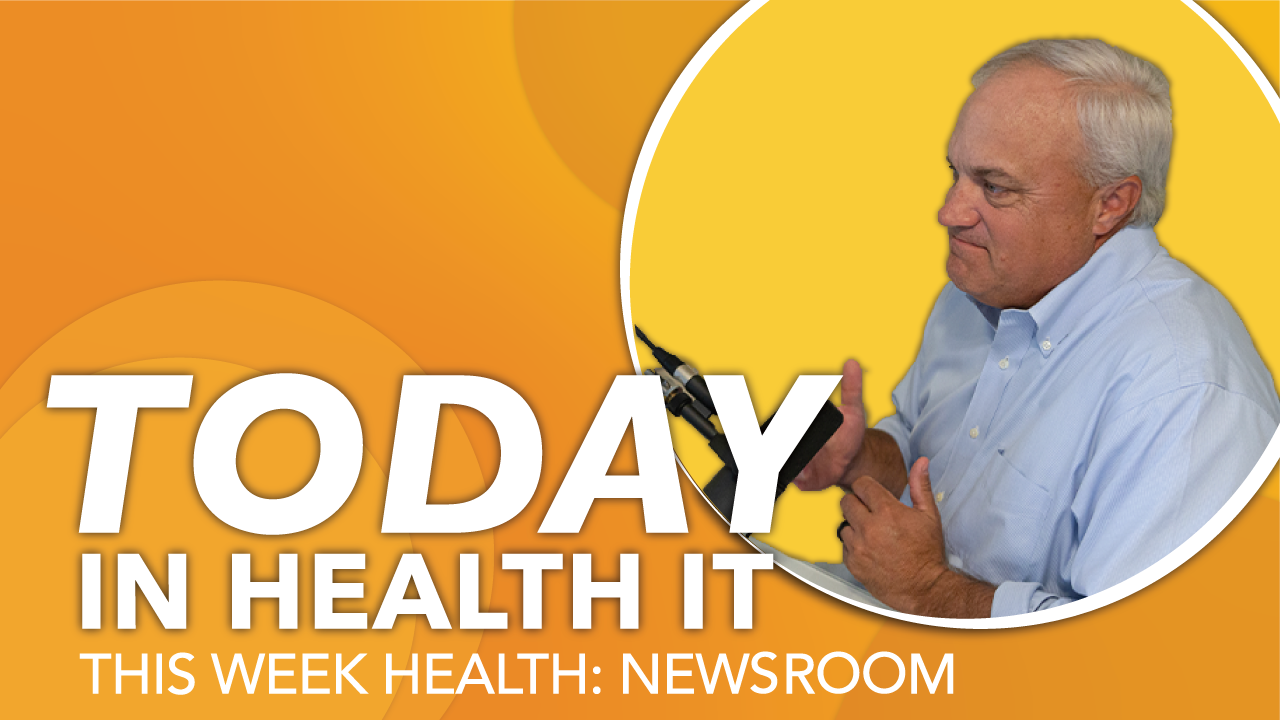 5G is coming, 5G is coming, 5G is here. Zzzzzzzzzzz. Still 5 years away at the earliest for any real transformative innovation. That is things that can't be done in another way. Today we talk about 5G and what tech innovators are focused on.

Today in health, it. It's not you. 5g is a big let down. My name is bill Russell. I'm a former CIO for a 16 hospital system and creator of this week health. I said a channel is dedicated to keeping health it staff current and engaged. We want to thank our show sponsors or investing in developing the next generation of health leaders, short test and artist site. Check them out. Two great companies at this week. health.com/today.

All right. There's a article popped up in my, a wall street journal feed yesterday, and I was reading it. I thought. You know, this is relevant. This is interesting because we had a bunch of people in the healthcare industry say 5g, 5g. You look at 5g. It's amazing. Well, I think it's been a let down and this article confirms that I think it's been a let down. So let me give you a little bit.

None of that happened, of course, but you know, what did happen this past weekend? I turned off Verizon viz V Z. , 5g on my iPhone and barely noticed the difference. The 4g LTE performance. And coverage felt just about the same. Three years since the us cellular carriers lit up. Their next generation networks and promise to change the game. The game hasn't changed. And if you're among the millions of Americans who recently upgraded, you probably already know that.

Except maybe a higher bill and faster draining battery. Wow. That's an indictment. Let's see the us cellular cutters continue to put up new 5g towers to improve the speeds and coverage across the country. , let's see, why is it improved? The speeds that's because unlike 4g, that brought Uber streaming, Netflix.

And more 5g killer app isn't even for smartphones, it will most likely FOSS. , foster emerging technologies. No need to cry into your 15 page monthly bill. However, once you understand exactly what kind of 5g you're using, and he goes on to talk about the fact that there's three kinds of 5g, there's a low band 5g, which is essentially just a little faster. 4g LTE, you have mid band 5g, which is known as the sweet spot.

Mid band offers greater speeds while covering relatively large distances and working well indoors and out. T-Mobile's got a lot of this. Which is why the company has led the industry speed and coverage tests. UQ GLA most recently named the fastest mobile operator in the U S with the median download speed of about 116 megabits per second. Verizon and ATT mid band offerings are more limited right now, but are expected to expand this year.

So you have, , , mid band and then you have high band 5g using high millimeter wave frequencies. This provides. The fastest speeds at close range. You need to be mirror tower and the signal has trouble penetrating walls, Verizon at and T T-Mobile offer this shorter range service in select cities and often in bigger arenas, stadiums and airports. Unfortunately, there's no indicator to tell you the difference between mid band and high band. So you have no idea if you're on it.

, it goes on T-Mobile Verizon ATD from left to right. Oh, it shows their, , it shows what their signals look like. Since you have 5g, you see 5g, you w 5g plus just different ways that they have it out there. , On frozens, ultra wide band. I got 500 megabit download. But I didn't notice a difference when streaming Netflix watching tic-tac loading websites or sending messages.

You don't need a firehose to extinguish a candle. , where might you see a difference is during commuting hours and other times. Congestion cheating Sharma a telecom industry analyst told me a Verizon spokesman. So the 5g is hired. Data capacity helps at concerts, sporting events and other crowded areas.

All right. So that's what we're looking at today. , let's see no 5g. Isn't likely to change your life, but you can still get the most out of it, especially if you're paying more to access it. It goes into that. , it says be wary of the coverage. Check out your carriers. 5g plans. , you could try another carrier. , don't forget to use wifi.

Of course don't forget to use wifi. It was interesting. There was a time. Where I was talking to CIO and they were saying, Hey, we're going to replace, , some of our networks on our campuses and whatnot with 5g. So instead of wireless, you're going to see 5g.

The problem with that, of course, is that 5g doesn't penetrate walls requires a lot of new towers and all that other stuff, which needs to be built out by the carrier. You can't really build that out by yourself as a health system. So that, that challenge was sort of doomed. The failure from the get-go. Anyway, they go on to talk about, , some of the things which we could see real benefit from. And one of the things they mentioned.

Which I've looked at is the in-home 5g. , broadband routers that are starting to pop up. So if you're tired of your cable modem, You might want to check that out? T-Mobile I think is probably the most. , they just have the most, , spectrum to work with. So it was probably the, the, the best one to look at. But anyway, they have mold broadband routers, which could change things maybe in rural areas. Although again, not huge.

These are technologies that have been around for a while and, and are, , gestating in the process of growing up to be innovations that are going to revolutionize things. But they're way ahead of 5g. Now there's a lot of money chasing 5g, but at the end of the day, The, , 5g is going to take probably a decade.

But it's a. It's a viable technology. It's a valuable technology. There are use cases within your health system to deliver value to the organization. AI is making huge strides. At some point, I'll talk about chat GPT because it is the. , conversation do shore right now. , that I'm having with CEO's.

But at the end of the day, AI is making huge strides and not only in the administrative setting and it's phenomenal there. I definitely in the imaging area for sure. But also it is making huge strides in the clinical setting. , and you can refer back to this stuff that I reported on earlier around Mayo clinic and how they've baked in 16.

Indicators directly into the clinician workflow. , again, so AI is, is, is practical. It has use cases today. That you can get people excited about computer vision. I've talked about artist site a couple of times, there's other companies out there I'm ex I'm most excited about artists site because I've had several conversations with them on the show. And I see it as a, when I had the first conversation with them.

I thought this is the most revolutionizing, , technology platform and product I've heard about in the industry. And since I've been in the industry. And so I am I'm high on that. You know, the, the other sponsor for this show. His short test, I've looked at what they're doing, essentially with an RPA solution.

, around testing and saving, , tens of hundreds, if not thousands of man hours on testing, which you have to do anyway, when every time you receive receive a new release of software. And they are automating that 80, 90% of that process. I'll be like that's that's ours. And that's technology. That's real, that's delivering value today. Same thing with artists sight, real delivering value today, especially in the areas where we're struggling, which is in the workforce shortage. So anyway,

, I would be careful on the technologies that you stake your I'm an innovator claim. 5g was not at. , 5g is like, , like saying, Hey, we're going from, , we're going from wire to wireless. People were like, you know, There's an awful lot of convenience there, but at the end of the day, I'm still accessing the network. Right.

, There it was an incremental move. Whereas some of these other technologies we're talking about, , ambient listening, computer vision. , RPA AI. We're we're we're talking. They are ready for the. The next step, which is new. Innovative. , integrations into your clinical workflow, into your system that deliver real value.

And remember I, what I talked about yesterday was delivers hours back to your organization. Not necessarily dollars hours. Because that is going to be the real crunch. Over the next. Three years, I believe so. If not beyond. So that's, , I think that's the, so what. So, what is 5g is there it's going to evolve. You can use it.

I wouldn't tout it as my innovative technology. I'd be playing with it. I'd be looking at it. I'd be trying to explore it. But at the end of the day, if I were doing anything of real consequences, if I was doing a surgery, Or that kind of stuff. I wouldn't be doing it over a wireless. I just wouldn't. I would be doing it on a wired network.

At this point because it's more reliable. At the end of the day, it's more reliable, it's faster, so forth and so on. All right. That's all for today. If you know someone that might benefit from our channel, please forward them a note. They can subscribe on our website this week. health.com. Or wherever you listen to podcasts, apple, Google, overcast, Spotify, Stitcher.

You get the picture and eight. Would really love for you right now to shoot an email to somebody say, Hey, check out this podcast that would really help us out. , don't forget. We are partnering with Alex's lemonade, stand to fight childhood cancer, and to look for cures. And we are doing a fun drive all year long. You can see that, , in our progress@thisweekout.com. There's a logo of Alex's lemonade. Stand on the top, click on that. You can see that we are already at $10,000 for this year.

And we would love your help. Click on that. Go ahead and give today. And help us to, , support. Finding cures for childhood cancer. , we want to thank our channel sponsors who are investing in our mission to develop the next generation of health leaders, short test and artist site. 📍 Definitely check them out at this week. health.com/today. 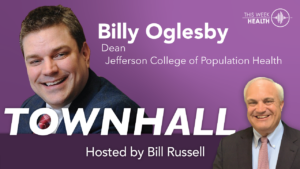 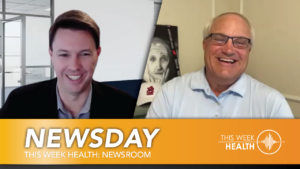