Oh, wait, those are the classic blunders from The Princess Bride.

But there are classic blunders in the digitization of medical devices. Today we talk about them.

Today in health, it classic blunders in the digitization of medical devices. My name is bill Russell. I'm a former CIO for a 16 hospital system and creator of this week health. I set of channels dedicated to keeping health it staff current. And engaged. We want to thank our show sponsors who are making all of this possible. We appreciate their investment.

We have a goal to raise $50,000 from our community. We already have a little over $10,000 for this year in January, we asked you to join us, hit our website. And in the top banner, you're going to see the logo for the lemonade stand. , click on that to give today. , we believe in the generosity of our community and we want to thank you in advance. All right.

To the article. So this is Lisa soon and she's been on the show before. And a really smart, , thinker, , venture capital investment person. And she has written a, I. When I think it was phenomenal. Article classic blunders. In the digitization of medical devices. And it's on her blog. So where you can see it. I know what you're thinking. You're thinking, , what are the classic blunders?

And she has two of them in here. And as she actually jokes never get involved in the land war in Asia and never. Go in against a Sicilian when death is on the line, which is obviously from princess bride, but here are the pertinent new ones. Building the digital program to support the sale of the product for the benefit of the company, rather than support the practice.

And the second is thinking that digitization. Is a valuable thing in and of itself when the real value is improving that having data makes a difference in cost and outcome, right? So it's a, oh, we're collecting all this data. Look at all this data we're collecting. Isn't that valuable instead of saying, taking it to the next step and saying, what is the value?

What is created? What does it do in terms of real value in the delivery of health? Or healthcare. , for the patient and the provider. So. , I wouldn't go from here. This is about halfway through the article. I'm going to go through what she has to say here as to blunder. Number one, having spoke to at least seven zillion physicians, chief technology officers, and health systems.

It was a hundred percent clear and true. That no such person or entity wants to look at multiple unengaged unintegrated software platforms to review data. For any purpose, whether it's for surgical planning, remote patient monitoring, whatever. They want one source of data flow in their workflow and they want to see all of the products they use in that software source, extra bonus points. If that source.

Is the preexisting E M R. While an individual product with an individual software portal for looking only at the product is fine for a short while when the device is new. It is not a long-term solution. Rather purveyors of digitally enabled medical devices must fit into the platform ecosystem. Out there in the world alongside their competitor products.

And can you blame them? I would not want to walk into my kitchen and have each appliance running on a different electrical system. It's bad enough trying to figure out my damn TV, remotes, universal remote. , ha. Good thing. They bounce when hurled against the room. , across the room. All right. So, , again, driving home that point of, Nope, everybody wants an integrated system. That's the starters.

I've seen many companies described how adding a data stream to the device. It makes them more valuable. I agree, but the value isn't an expanding the price of the product because it can collect data. The value is in using the collected data to prove that the device itself is better. In other words, the way to make real money from integrated digital device products is by using data to create evidence that having the data makes a meaningful, positive difference in clinical and or financial outcomes. This is so critical, especially in today's day and age. We've talked a couple of times on the show already this year, and we're only on what is it?

January 18th. We've already had a couple of times this year, we've talked about ROI and the ROI is shrinking. Well, first of all, the ROI is shrinking. That is absolutely true. In other words, a 12 month or less is a go. , for a project. , 12 to 24 months is a, maybe 24 months and greater is, is outright out. That's, that's just the thing we've been talking about, but the reality is a lot of organizations are still think they're going to be able to sell the product without the ROI.

So forth and so on, that has to be very clear. All right. She goes on. This means that companies must make a serious commitment. To the resources to make that happen. Data science, analytics, competitive analysis, outcome studies, and here's where the anxiety starts to build. Be honest with themselves about whether the data demonstrates that their product is in fact more valuable than their own, not digitally enabled product, as well as other similar products.

I love that comparison. Like, is your product any better with the digital, with the collection of data and all that stuff? Is it any more valuable than your product that isn't collecting that stuff? And then you can start looking at your competitors. , that last requirement is a real buzzkill for many companies and they aren't willing to take a chance and finding out cannibalize my own revenue stream question, mark, prove that my product isn't quite as good as the other guys. Are you nuts? Comparative effectiveness is a four letter word. When spoken by product development teams.

It's like a prayer for prayers or it's like a prayer for payers. And provider organizations. I am a hundred percent confident that in the end, if companies don't do this work themselves, researchers will do it for them. And purchasers will read those studies and act accordingly. So she's essentially saying.

But most of the wearables did not evolve out of medical device companies. Rather, they started and continue to operate as digital companies that happen to have some risks, worn similar hardware and their investors think that hardware part is a damn nuisance because only SAS can be the once and future king.

Here's the issue though. The best check engine light cannot be wrist-worn they must be inherent in the device and impossible to remove. They must be charged at all important times and not subject to a patient's bad memory, laziness or loss of charging cord. Wearable wearables rapidly become drawers. Bubbles implanted medical devices, properly designed are the ultimate future.

All right. So how'd that wearables rapidly become drawers bubbles. , and she's essentially saying, Hey, your apple watch has to be charged every night. Actually. That's one of the reasons I don't own an apple watch. I mean, I own actually. Proving her point again, I have two apple watches in my closet that I do not wear, but they, they become durables. And why have they become doorbells is because.

, And then she drives us home with this analogy and I will stop reading after this one. Let's see. A good way to think about this. Is in the context of your car. If you had to remember to bring a laptop into the car every time you drove in order to be informed about problems with the tires, gas tank, brake systems, et cetera.

That would be just fine until you didn't bring the laptop, forgetting it on the counter while you were looking for cell phone. At first, you would be fine. Hey, no problem today. So do I really need to drag this thing around? And when you forget to charge it, It becomes pretty useless anyway, on a long drive, the charge would fizzle. And just when your check engine light would be telling you that your tire pressure has dropped precipitously.

A check engine light needs to be fully integrated into the car. Not an appendage. This is the future of digitally enabled medical devices. We're not entirely there yet, but it's happening. And just in the Nick of time, since my friends and I are getting to that age. That they make funny groaning sounds. Every time they get a bed in or off the couch.

I love this article and I think it, it gives us a good, , backdrop for what we should be looking for in digitally enabled devices. , we should be looking for studies and I'm talking about it now from the other side, I'm not talking to the medical device manufacturers or the wearable manufacturers. I'm talking to the healthcare providers who are going to be doing.

And we're going to create. , true information from that data. But the data needs to be there when it needs to be there. Hopefully that makes sense to you. It needs to be on functioning, collecting data when an incident occurs. Otherwise it really doesn't have. The value that we think it has. All right. That's all for today. If you know someone that might benefit from our channel, please forward them a note. They can subscribe on our website this week, health.com or wherever you listen to podcasts. And, you know, I rattle this off every week and.

, it really would help us. If you shoot a note to a friend and say, Hey, I'm listening to this podcast. Love for you to listen to it as well. , they can subscribe at apple, Google, overcast, Spotify, Stitcher. You get the picture. , we wanna thank our channel sponsors who are investing in our mission to develop the next generation of health leaders, 📍 short test and artist site. Check them out at this week. health.com/today. Thanks for listening. That's all for now. 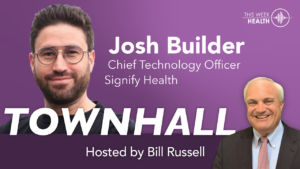