We'd love to see you, stop by and say hi.

Today in health, it. No show. My name is bill Russell. I'm a former CIO for a 16 hospital system and creative this week health. A channel dedicated to keeping health it staff current and engaged. What am I going to do on a day? When the show is entitled. No show. , I'm just going to give you some details of what's going on over the next couple of weeks. , first thing I'm going to say is, Hey right now, what you should do is tune into town hall. Town hall is taking off. It's doing really well. We have guests who are interviewing peers in their network. Brett Oliver, Dr.

Brett Oliver, Dr. Jake Lancaster read. , Stephen, , we have some others, Craig Richard, Phil's going to do some interviews for us. Lee Milligan has done some interviews for us and we have some others. Who are doing those? So, , the channel on iTunes is called this week health community. And the show is called town hall. So go ahead and sign up for that. Let me give you a couple of details on my schedule over the next couple of weeks. On Sunday of this week, I am heading over to Miami. In fact, I'm playing golf in the, , opioid task force golf tournament on Sunday morning.

And then I will start catching up with some of my peers during that event. And after that event, , we will start to connect and I will be doing interviews. If you see me there. And you're doing something interesting in health care, come over, say hi, and let's see if we can't capture an interview's in action. About a 10 minute.

Interview where we try to get right to the point and find things that are going to be interesting to the community. Around things that are going on at your health system. And then on Monday, my schedule is filling up for Monday. I have a bunch of interviews planned. I'm going to be interviewed actually on a LinkedIn live session. One 30 Eastern time.

, Samuel Hill from mitigate, it's going to be doing a and. Interview of me. That'll be interesting. , and then I have a couple other interviews planned that day of various companies and, , , the solutions that I think are pretty interesting. I'm going to be talking to, , transparent in the morning, a little different, ,

And then on Wednesday. We have a couple more interviews, look forward to catching up with some, , some people I haven't talked to in awhile, I'm going to see Korean Edwards on a Wednesday morning. First thing, looking forward to that.

And then, , Thursday, Friday, I'll be back. In the studio over here doing what I normally do. , we'll be airing, , interviews and action probably over the next couple of weeks. That's what you're going to get on the today. Show. That and a news day every Monday. So we'll talk about that.

Then the following week again on Sunday, I'm going to be heading out, heading over to Orlando for the HIMS conference. And. Man, these interviews are really scattered, , all over the conference. A lot of stuff going on on Tuesday,

on Monday, a little less. , in terms of interviews, I am going to catch up with Nasir and design. Mommy from Jefferson health. And Don Rucker who's now with a one up health used to be the, , ONC national coordinator. For health, it. And then on a Monday night, health impact is hosting an artist site dinner, look forward to catching up with them.

, late in the evening, we're going to be taking off from that conference so a lot of stuff to bring to you. I'm looking forward to the next two months because I'm going to get to see you. I'm going to get to see you and hang out and hear firsthand. What's going on and that is the best part of what I do for living. So, , that's it, that's the schedule that's what's going on. You're not going to have a show tomorrow the next day. Here's what I recommend you do this week. Health community go out iTunes, sign up and, , you know, get connected with that show. It is really starting to take off and we love the work that's ???? being done there.

And that's about all for today.

So, thanks for listening. That's all for now. 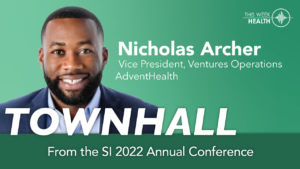