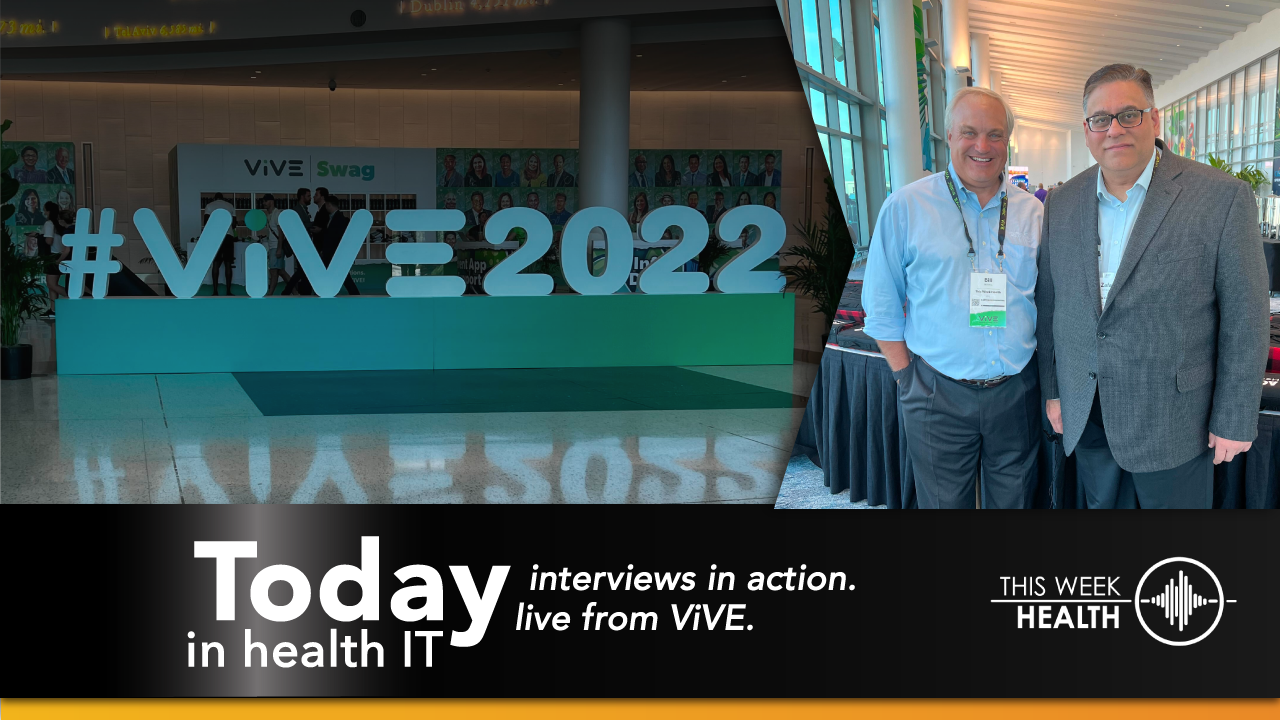 Our first guest Zafar Chaudry from Seattle Children's, shares insight into his IT team and their work in mental health.

???? Today and interview and action from the Vive event down here in Miami. My name is bill Russell. I'm a former CIO for a 16 hospital system and creator of this week health, a set of channels dedicated to keeping health it staff, current and engaged. We would have thank our show sponsors who are investing in developing the next generation of health.

We were talking about, you know, what are, what are some of the things that are top of mind right now for CEO's and, and what's going on. Um, and you shared a little bit about mental health. It give us, give us some more information

on that. Yeah. So it's interesting when we debate how the pandemic has impacted us in healthcare, it support services.

Yes. The usual things, recruitment retention come up right. And cost of running services, burnout, but related to the burnout is also the minute. Of the support services, individuals such as the guys in health it, and you know, it's quite concerning to me that whilst we support our clinicians through this journey, that our, it folks are also facing life, right?

Whether it's COVID affecting their families or their kids having to be homeschooled, they have also faced the challenges of the pandemic as it has. And it hasn't had an impact on them.

Yeah. It's it's that, that came a friend center for me. We had actually two suicides while I was a CIO within the ITT.

And, you know, both of them were related to really home situations that, I mean, the people around them weren't really aware of, but now people are flung to the far reaches. You guys are still remote, I assume. Yep. And so how do you, how do you tap into that? How do you understand where they're at? And reach them where

Well, I think the way in which we, as leaders interact with those remote groups has to change and has changed. You sort of learn during the pandemic that checking in with people is now very different than them stopping by your cubicle. When they're on site. Now you have to take protected time, meet with your direct reports and, and skip level down and just ask them how they're feeling.

We've been having sort of back check-ins in our organization where we go to the front line within technology and we sit down with them and say, ask that question. How are you feeling what's happening to you? What's and it's quite interesting to hear that people will honestly say that they're not feeling good and we've expanded our employee assistance programs at children's we've added in a.

Telehealth service that focuses on giving people extra mental health support to sort of add to helping out in this scenario. Yeah.

Do you think this will lead to bring people or have you guys started to bring people back in a little bit? It's it's it's isolation. We know in a mental health world, that isolation is one of the, one of the biggest, uh, things that leads to depression and other things.

And we're almost isolated. We're working behind the screen. And, you know, we think, oh, people are home with their families. Well, some people don't have families they're literally at home in front of their screen and would potentially prefer to be in a group of people.

Yeah. And we all need it. Doesn't really matter how introverted you are.

We all need human interaction. Right. So absolutely people need to have that interaction. The other thing we're sort of saying is if you're working from home, people are not stepping away from the machine that laptop is sitting on your side. And the minute you think of something you reaching for it, and it could be any hour of the day.

And what we're also trying to help our employees understand this. That has to be a time where you step away from them.

That's really interesting. So you, you know, I've, I've worked from home probably a decade out of my career, and maybe you have, you worked from home there. It takes a certain amount of discipline to say, okay, I'm going to walk away now because there's always work to do.

When we first started in this pandemic and people move remotely, did we all really dress to go to a zoom meeting and over time you've learned that actually, if you do somewhat dressed as if you're going to. Then that triggers in your mind that attitude of, well, now I have to one dress and be at home versus sitting in your pajamas and doing this work.

And I think that's evolved over the last few years where people have done that.

Yeah. People are learning that. I love the cadence aspect. I'm curious. So my cadence is I do get up, uh, I get up and exercise, take it, uh, take a shower and put on a button-down shirt. I'm not going anywhere. I'm still in my house or whatever, but it, there is sort of a trigger.

I'm also in my office. There's a, uh, I used to, I don't right now, but I used to have a sign that said leaving the office. When I, on this side, when I walked out and it sort of reminded me, Hey, check out from here, the family's on the other side. Um, and I try only to do work in my office. I mean, what, what kind of, uh, rhythms do you find

Yeah, I do a similar because I have, well, I guess I'm fortunate enough to have that office. What I have seen with many of my employees is they don't. They've been working from the dining room desk, or actually I've seen some people in the closet and then master bedroom closet doing this work because they just don't have the space you have, depending on where you live in, in the nation, you might not have a very big apartment or home.

So that has also had an impact on people. Cool.

Um, how do you see this thing playing

out? I think it's going to be based on organization. We've decided in our it group that 80% of our individuals will remain remote and only the desktop clinical engineering biomed who have already been on site during the pandemic will come to site. And my personal approach to this.

I've always felt you should do the work where you feel comfortable. So we have converted our offices to hoteling space, similar to what a tech environment would look like. And if you want to come and collaborate, you can. And if you don't feel comfortable, then that's fine. And what we've also seen is many people have during the pandemic sold their smaller properties, moved further out to have that space, to have that home office reduce some of their costs.

So that commute time would have been. So they may not want to come in every day. I would say once a week could be a reasonable cadence. Well,

and you anticipated my next question, which was I'm talking to CEOs are like, man, these people moved to the, to the far reaches and to say to them, Hey, come back.

Some of them are coming back from a different state. It's a little, little different, uh, a way of thinking about it. The, um, let's talk about this space. It's, it's interesting, you know, if you go to a Silicon valley office and I don't know if you made this transition, but. You know, you go in and there's a coffee bar and there's a hoteling spaces.

There's places like this to sit down and that kind of stuff. Did you rethink your whole space? He did

that prior to the pandemic coming. So all of our offices for technology are in downtown Seattle. The entire. Was refurbished to mirror the competition because my competition is across the street. Right.

And your competition is

big tech. Yeah. And so if I was going to retain people, I had to provide that environment. So we'd already fitted that out. But the difference was it wasn't hoteling space. You were assigned to cubicle during the pandemic. We've learned that that space has now become bookable hoteling space, and you don't actually get a cubicle moving.

Including myself. So I've moved from a physical office on our main hospital campus to our it campus. And I also have a cubicle.

Yeah. You know, I, when I went to the box offices, uh, box.com, Aaron Levy was at the end of a row of people. Just yes. That's where I'm at too. Yeah. That's interesting. I mean, so the, the big office is sorta sorta gone.

I mean, not that you had a big office, but generally the CIO pretty nice office. You sort

of strive sometimes to have that corner office, but no, you don't have that anymore. I have a nice view, but I'm at the end of a row of cubicles. Now, the challenge is when I'm in the office, I do still have to go into a conference room.

in almost every day?

I go. About twice a

week, twice a week. Okay. What about the executive team? Is, are you guys meeting via zoom or

we've been meeting remotely. There was a gap where we were allowed to come to site that we beat every Tuesday.

So we would trying that out of our executive meetings, uh, anywhere from six to eight hours on a Tuesday. So sitting in the mask, isn't always the most amazing experiences when people are trying to articulate sometimes

mumble. Sephora. I want to thank you. You know, the next time we get together, we'll have to talk about some of the cool technology stuff you guys are absolutely looking forward to it.

Thank you for your time. Spiel.