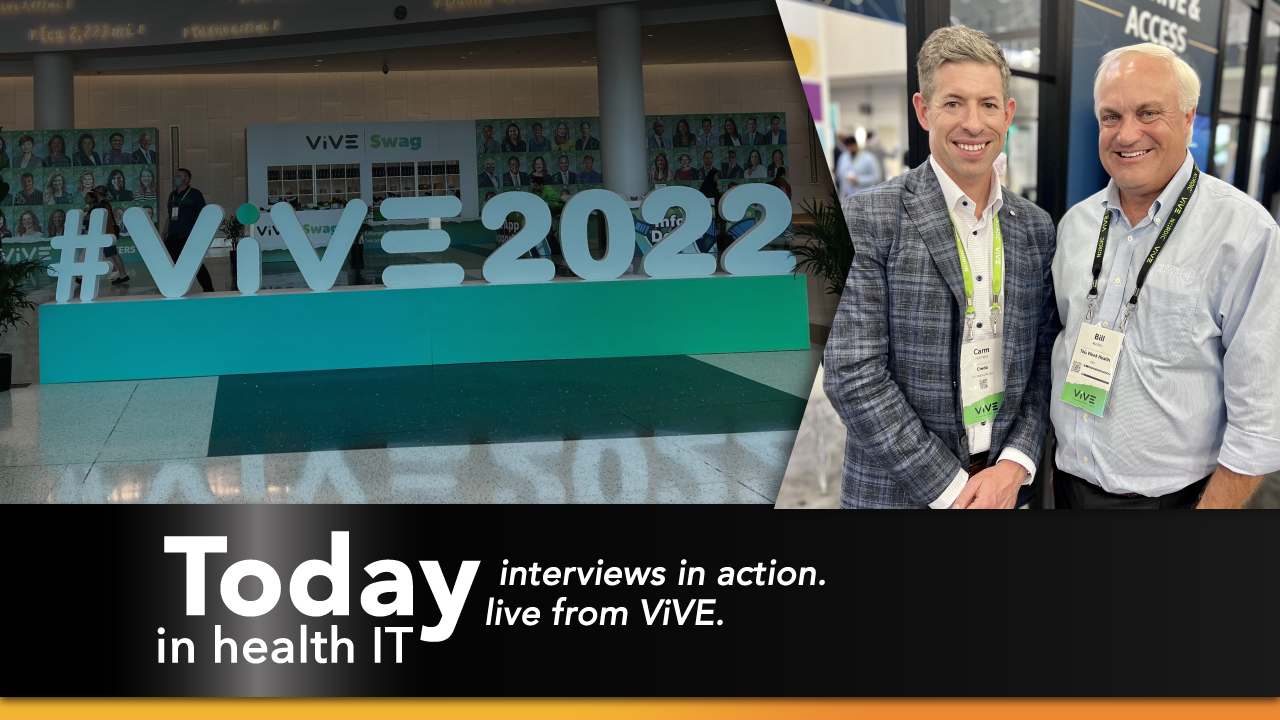 Carm Huntress, serial entrepreneur, is at it again with his new venture Credo. Credo Addresses the problems that often go unseen in healthcare, "The basement problems". Today we talk with Carm about moving medical records and the cost to healthcare.

All right. Vive 20, 22, and just ran into, , Carm Huntress. Now you've been on the show before I have, , when I was running RX review, which is now the largest, , cost transparency network and healthcare for providers. Fantastic. But that's not what you're doing anymore.

No. So, , I have officially launched them today as our, both our launch of our, , my new company called credo. We're announcing our $3 million seed fund, , funding today at the conference advise, which is why I love getting to talk to you. I mean, it's, first of all, harsh review was really interesting solution.

And you guys said did really well. I mean, we ran into each other many years ago. Yeah. Yeah. It was a labor of love. I mean the first four or five years were really tough in terms of building out the network and connecting cost transparency services to from payers and PBMs to the point of care to the EHR and doctors.

You know, now today after, you know, eight, nine years of really hard work, you know, we're supporting 250,000 docs, 150 million insured Americans, 700 hospitals. It is really a large enterprise now. And so really happy about the work there. And we raised about 35 million over, over that time period. So most people, when they get done that they, you know, take a year off, recover, and then they decide whether they're going to come back in.

But you're, you're in not only are you in when I asked you. You know, are you going to take a break? You're like, no, I'm, I'm in. This is exciting. Yeah. , this is the time. I mean, I think we're in such COVID was such a great accelerant, , in terms of digital innovation and digital front doors into healthcare.

, and so I, you know, I want to be a serial entrepreneur. I want to do a couple of, hopefully a couple of runs in my career. You know, you've got a couple of swings at bat and healthcare is just. We really need to have a commitment to solving some of these big problems. You know, we've invested, I don't know, 80 or $90 billion, and we're not really seeing the cost of care come down.

And, and I think, , you know, we need to work on these, these hard problems. , and that's why I launched credo. All right. What's the problem. What's the problem. So the problem is, is as you and I were talking about before, this is another basement problem, , in hospitals, just like pharmacy was, but it's about medical records and today.

, moving medical records around is still a pretty arduous tasks and it's still dominated. Believe it or not by phone. In fact. So in the U S , estimates are anywhere from nine to 15 billion fax pages per year, still in the U S it's 126 billion of costs. And as we think about value, three of every 10 tests are duplicated because they can't get their hands on the record.

And just in areas like radiology, we're wasting about $20 billion in duplicate testing. We need a better way, a digital first way, opposed to phone and fax to move medical record datas, , information for patients that need it to their doctors, to their payers, , and to them. So they can have a digital portable, electronic health record that they can get to anyone who needs it to take care of them.

Alright, I'm gonna, I'm gonna push on this a little bit so that you can give me details and I don't know where you're at on the product cycle at this way. We're far enough along to talk about it. Okay. And I think about that the, , today they moved by fax, which means those they're probably paper documents yeah.

Were talking about. Yeah. I mean, there's a lot of that happens, but you're still talking about an unstructured PDF that's being shipped around healthcare. So are you talking about just providing a way for that PDF to get to where it needs to get to at the right place at the right time? No. So what, what really the company is trying to do is we're looking at, , the new regulations under the 21st century cures act in terms of patient facing API APIs, the TEF regulation, which is, , , all about creating a national interoperability network.

And really the, the thinking here is that we finally have an opportunity, , and that, that infrastructure in healthcare, we've got over 10,000 patient facing, , access points into structure and medical records. We've got Tesco, which is giving us a pathway to national interoperability. And so when we interact with our first customers or at risk providers, when we're interacting with them, with them, we're doing as much of that work over those networks, as we can to gather the data with the support of the patient and the provider and in the situations where we can, of course, we're going to have to phone and fax and do that as an

You do have some, yeah, look, I mean, we've got to meet the market. , there's no way we can do a hundred percent of our business today, digitally. That's not where the market is. And so think of this as a tech enabled service to support providers and payers that are short-staffed to do this work in house.

So outsource it does, and we do it as much as we can digitally, but we have the human capital to support patient support providers in the process. This is interesting. So we just had Micky Tripathi on. We just had a nice joke. We're on the show and we'd aired those over the last two weeks. This is a practical application of that.

So the, the EHR has, have to fire enable certain sets of applications, , to Africa, the national, , sharing framework that is being put in place. So you're going to tap into those, those records sets into those API APIs and use all the things that they were talking about on those shows to grab that data and move that data around in a digital format, if, if it exists.

Absolutely. And that's our always our strategies. You know, a lot of the new on-ramps in terms of the patient facing API is, are using fire, which fast healthcare interoperability resource, , where that's a standard structured schema to move the data around and we'll go get that data and move it over to the provider, needs it in that format.

Right. And so we've got enough. What's so exciting bill right now is that we have enough, , , you know, deployment of this infrastructure in the U S healthcare system now where I really think we're at a tipping point. You know, not all of it, but the vast majority can get to, we can get to it digitally.

Right. And that's the on-ramp we want to be in that last mile, , for providers in particular who had doing this work manually today through phone and fax. And it's a real problem. I mean, the thing that we're facing right now, which is the existential crisis of healthcare is staffing shortages. Right? So, you know, if you're part of your job as medical record retrieval today in an outpatient facility, that's 10 or 20% of your day, we can take.

And that's what we're really trying to do, but we're not coming in here saying we're just some digital technology. We're human capital, right. We're supporting you with both people and technology as a tech enabled service to get you the records you need on time for that patient visit. So. Where are you selling to, are you selling to ID ads?

Are you selling more to physician practices or, yeah, we're an early stage startup and you know, you know, bill, I, I sold into large ideas that are attribute and that's not where we're spending our time. This is really about ad, , outpatient, primary care and specialty providers, because it can do the most good, I mean, that's staff taking 20 to 30% of their time.

That's 20, 30% of the time. They're not interacting with the patient. Creating the customer experience that we want to think that we're using valuable nursing time, where we have shortages in the U S on medical record, retrieval is ridiculous. And so that's where we want to stop and step in as a thoughtful partner and do this, you know, , do this function within these outpatient facilities.