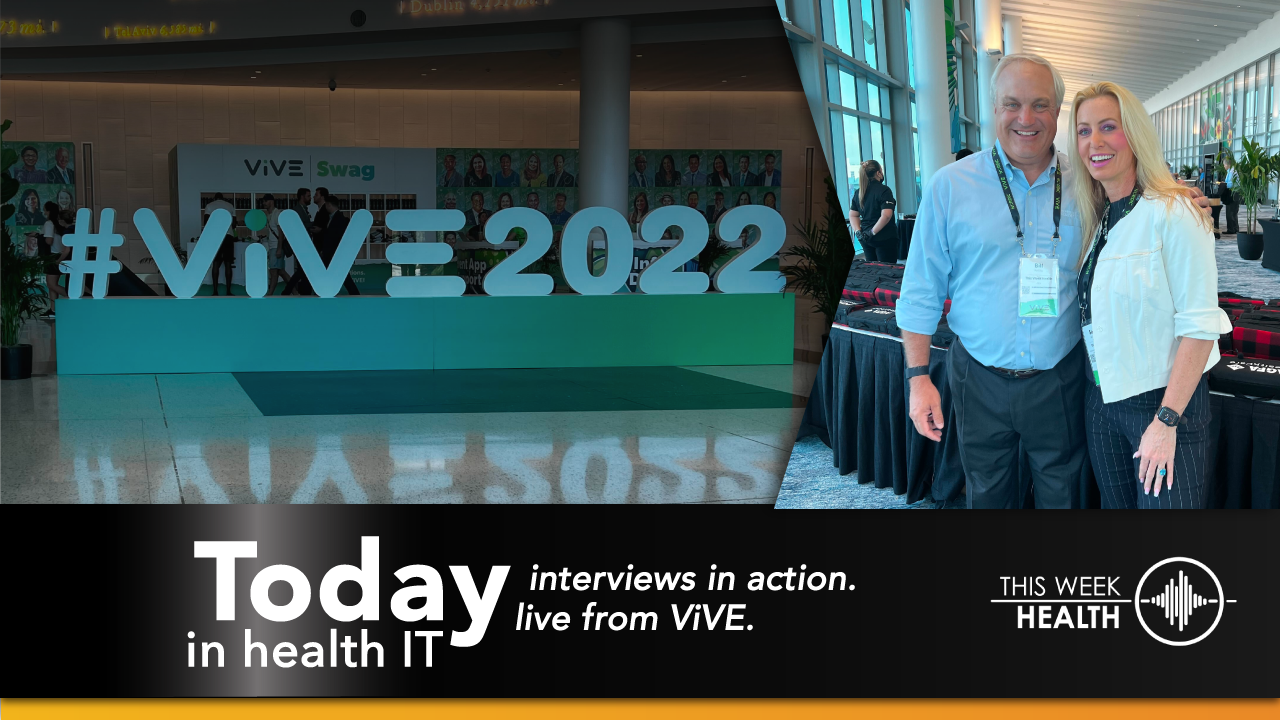 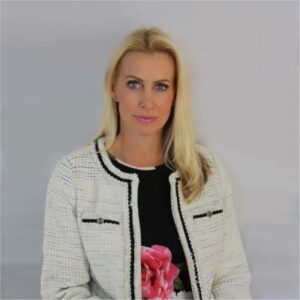 Sarah Richardson, SVP and CIO at Tivity Health stops by the discuss whole continuum of care that is keeping seniors healthy in the Medicare advantage space. Hope you enjoy.

Today, we have another interview in action from the conferences that just happened down here in Miami and Orlando. My name is bill Russell. I'm a former CIO for a 16 hospital system and creator of this week health instead of channels, dedicated to keeping health it staff current and engaged. We want to thank our show sponsors who are investing in developing the next generation of health leaders, Gordian dynamics, Quill health tau site nuance, Canon, medical and current health.

I thought that was like, why you wore, I wore them. No, but you know what? I'm going to use that because I feel like that's awesome. That's a great idea. That's fantastic. So you're with, , you're with Tivity now Almost a year, almost a year. Really?

Well, I've done fun stuff everywhere. I don't think it's fair to say that like, Hey one thing's different

know you don't have to lie to me. I mean, there's a lot of, Hey, can you move that computer from here to there to set up this new office? The interesting thing about the whole DaVita thing is I went to go work for healthcare partners.

They got bought by DaVita. They got bought by Optum. And then, so you're usually constantly lived in that merger acquisition space, which is great. We all know what we know how to do it. Tivity wasn't super compelling to me because of how we serve seniors. We do wellness, fitness, social engagement, mental health.

The whole continuum of things that keep seniors healthy in the Medicare advantage space. That's a big deal. That's 18 million members who need all of these different services, because the goal is to live a longer, healthier, happier life, 18 million nationwide. Yeah.

74 health plans, 18 million members that can utilize our services for all those aspects of their life.

And we keep growing those, those opportunities and platforms through different consumer engagement opportunities. So it's an amazing thing to be in a company that's so. And so capable of drilling in and serving it's it's true customer

plus the, I mean, I know it's seniors, but the digital foundation is pretty important if you're reaching a national constituency.

Well, sure. And thinking about this, people are digitally native, even in their sixties and seventies and beyond now. You think about the average 80 year old they've likely have been exposed to social media because they want to keep in touch with their grandkids and beyond. And so when we think about these digitally native or digital first opportunities for our seniors, they're not uncomfortable on those platforms.

In fact, we've seen a hundred percent growth in the last year, just on our silver sneakers lifeline. So it just continues to proliferate from there. So it's pretty exciting to get people involved in things that you didn't normally think that they would. And yet here they are asking for these features in their, in their programs.

So digital, do you have a digital foundation for this or is there like a silver sneakers app?

There is. There's a silver sneakers app. There's also a silver sneakers.com. We are embarking the, this year, especially, it's why I brought in some really fantastic new talent, but Beth Cooper and Chris Nelson and my team, and they they're supplementing people.

Who've already been there for a long time. We are, we're big into MarTech and omni-channel, we're very good at all those things in the data. The specifics to go behind that, we're in the process of literally building out a new consumer engagement platform so that we can do guided onboarding, getting in the configuration engines behind that.

So your bill, we know who you are and when you answer a few questions each time, and then we start to serve up just like any other. Things that we know that you're going to like best to do next. So the next best action is part of the work that we're doing. Now, you say consumer engagement platform, I hear CRM.

Is it different? It's different. So we have Salesforce for CRM. This is really going to be that engine behind the fact that we know everything that you tell us. Then we've got to reach me in a lot of different yeah. Which we have Omni today. But when you go to our website today, it's a website that you can go to.

Everybody gets the same experience. It'll be our website differentiation that says this. When you come back to our website, it is customized based on the usage that bill and the things that bill likes to do. Yeah.

So you're not dealing with the same, , data challenges or, I mean, you're dealing with some, but when you're at DaVita and when I was at St.

Joe's, I mean, the data on that on a visit is dirty and lot of stuff, but you're dealing with really a health plan type data and whatnot, is it.

Sometimes it's cleaner, depends on how they're sourced and they come in either way. You still have to make sure everything has gone through data governance, data lineage, data quality.

So the tools for that before you load that golden record into, in our case, snowflake to feed Omni. So being able to pull all those pieces together, elegantly still requires the same parameters that you needed in any healthcare system, because they're still using member data. So do you have a lot more flexibility?

we are not tied to a lot of legacy. We have a lot of legacy infrastructure, like legacy coding that we're overcoming, but we've been able to bring in brand new systems and really launch them relatively quickly because we're, we're smaller.

We're more nimble. We're 30 year old company, but we still get to act like a startup sometimes, which has been really fantastic, especially with our new leadership. Richard afterward, Richard Ashworth is our CEO from Walgreens, but then also. He continued to just bring in the people have done the best of what they've done in the industry.

And so we get to go and say on Friday, we need to do this. This is a really great idea. Go through the brand matters and yet start to launch some of those ideas even the following week, because our governance is us deciding, yes, this is the right thing to do.

Have you ever seen a development team before? Cause I, what I'm hearing, you're doing a lot of development, huge software development shop. Now I have always had software development in my world or in my ecosystem where it was maybe like a third or 25% of the total. That I had now it's like 60 to 70% of the team that I had. So I also, the fact that it makes me focus on new areas and things that I hadn't necessarily done recently.

So the reinvention of yourself is constant. And some of you know, I'm a big fan of always reinvent yourself. This has been a huge opportunity to do that activity with some really phenomenal talent. It's

a great fit for you because you are into fitness. I mean, you look great. You've you've every time I see you are, , showing off the Peloton and all the stuff that you're doing personally through the pandemic, your, your robot running a half marathon training right now.

I got my certified personal trainer certification during the height of COVID. Cause I, you know, what else was I going to do at night? I am. I literally went and got my CPT through, , national academy sports medicine, and I'm getting my nutrition certificate. So nutrition now is just as much funneled into and wellness and health and exercise as anything else I do.

And then if you find him said, Heimer, he's already wrote me into the doctorate program for chime, which will start in July. So,

so, so you're staying busy. Well, what are you looking forward to about this conference?

I knew you'd ask that question. I thought about it literally like two or three times I'm looking to solve problems.

I don't know. I have from the new technologies that are out there because there's such a proliferation of the cool thing. So many startups are able to go after and look at, and they're not unique to having to work inside the four walls of a hospital system. This is our wellness capabilities across the continuum.

And so I bet there's stuff out there on that floor that will literally solve things. I have didn't know it was a problem for me. And that's what I'm excited to go find. Yeah,

it's, it's this, this conference because it's a combination of health and child. It'll be interesting because the health conference, which I've gone to since the first one in Vegas is a VC private. but on the other side, it's, it's, , payers, providers, it's pharma, it's big tech. I mean, it's, it's all over the board. , and I think you do see the, the people that used to get swallowed up in chime. You know, they had a little booth back in the corner. You had to really find them, , they're front and center here.

So there there's a good opportunity as you're just walking around to, to see some of those good conversations. Last night, I have met

so many phenomenal people that are tied to the mission of what they do. And now when you ask people about like, what's your booth or what's your story? What's your company is very specific problems.

Being tried to be solved in the healthcare realm. That's important because it used to be these monolithic booths or monolithic organizations that took over all those different pieces. We've moved away from the EMR being the center of the universe. And now it's all the things that bolt on around it. So we went, you know, we had all these disparities went to best of breed and now we're starting to spread out again because it's easy for the.

To connect great ideas into the core of your systems. Sure.

Thanks for another great interview. I want to thank everybody who spent time with us at the conferences. It is phenomenal that you shared your wisdom and your experience with the community, and it is greatly appreciated. We also want to thank our channel.

Who are investing in our mission to develop the next generation of health leaders, Gordian dynamics, Quill health tau site nuance, Canon medical, and current health. Check them out at this week. health.com/today. Thanks for listening. That's all for now.