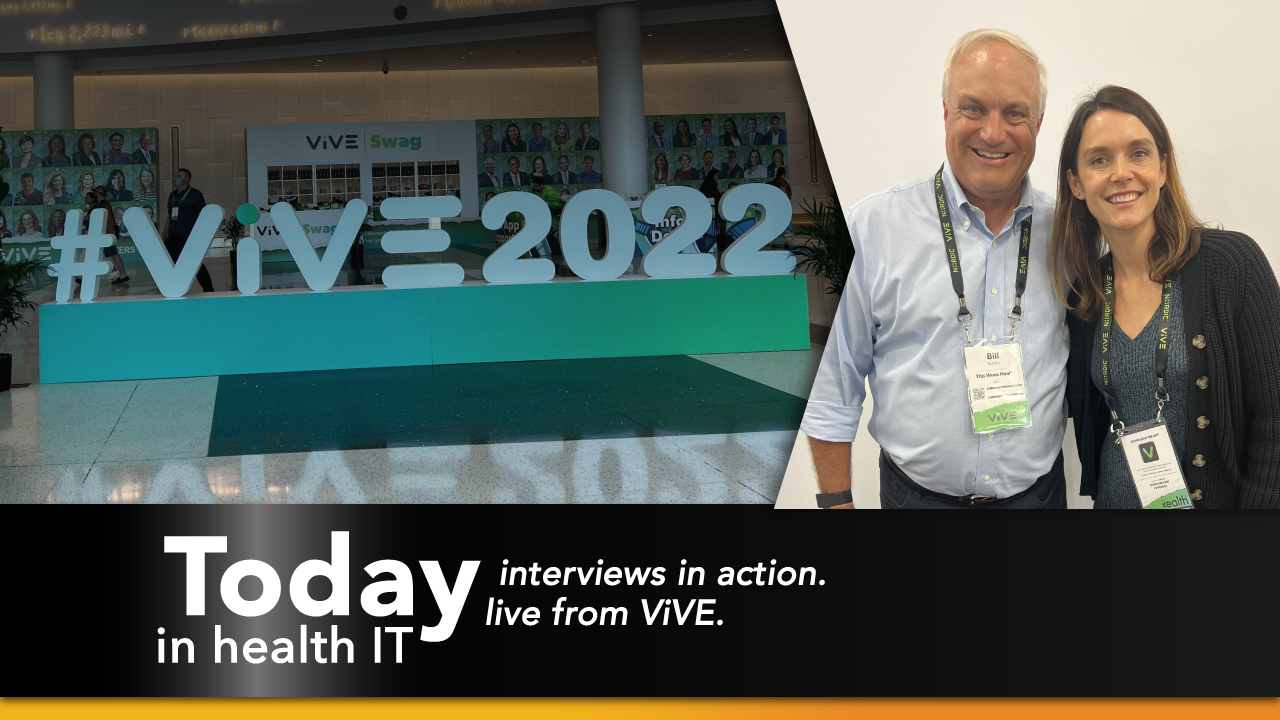 What are Health System venture partners looking for? How can you find the right partner for your startup?

You had a panel discussion early this morning, did you? Yes, I, yeah. I had a panel discussion very early this morning started at 8:00 AM, but I got here before seven. And so it's a full day. Wow. The, , you know, the second day of the conference, it's hard to get that 8:00 AM slot. So you didn't really rank too high to get that ADF slot, , all right. So the panel discussion, what was the topic? The topic was the imperative of working with startups. So it was kind of thinking about it from a health systems perspective. And why, and how should we engage with early stage companies? Wow. , interesting. So it was you, , suicide, I health ventures.

It was Aaron Martin Providence. I think it's health ventures, Providence ventures. , Aaron, Mary CIO's. W w what'd you take away from that panel? Yeah, I mean, one thing was, it seems like large health systems and large organizations in general have the same. Struggles when it comes to working with early stage companies.

And I think that, , there's just a lot of shared learnings, , which is something that I like within kind of the industry sort of a side note is one thing that, , a bunch of the strategic venture funds do is they get together and they say like, how can we make it so that there's not so much death by pilot?

How can we make it so that we can have deeper integration of the companies with business leaders within the organization? , hearing about kind of the struggles on the health system side, and then marrying that to the frustrations that you can hear with early stage companies that are trying to sell into it and saying, how can we remove that friction?

Yeah. I, I have found, , you know, the they're so happy. I got the deal with Cedars. I'm so happy. And then you get in there and they try to redo your entire products yet. It was like, I thought you'd like this product that we do, but we want you to tweak it here. Yeah. And you have to cashflow at some point.

Yeah. They, they have to, they have to have some money in order to keep going. And that's death by pilot. It's just, it extends even the contracting phase. Yes. Have we thought through making it easier for these people to businesses? I mean, I think that there are different ways that you can do it. I think one thing is having really defined metrics and making sure that both sides understand what needs to be met in order for that to convert into a commercial agreement.

What actually happens and what that commercial agreement is, is how that's going to be structured. And talking about that earlier upfront. Exactly. Rather than down the line, we'll get there makes a really big difference. , and then I also think the more transparency that you have around, okay, this is what our process looks like.

We're going to try to find you a business leader within this group, this group, and this group, when we do, we expect that the next steps will be X, Y, Z. Even if the transparency. We don't know yet, but we expect by this date, we will, that can be very helpful. Interesting. , so Sue Cedar, Sinai health ventures.

Yes. Not a part of the accelerator, separate from the accelerator, although, as you can imagine, there's lots of overlap. So the way that I think about it is you kind of have this, , broad spectrum in terms of how Cedar Sinai can work with early stage companies. So we have. Sort of less advertised, but a venture studio where we incubate mainly life sciences companies.

Those tend to be more, , on the biotech life sciences side, but more and more we're seeing, , overlap, , in terms of kind of computational and software applications, such that they could be venture companies. So that's one thing that we do. Then we have the accelerator program where we're working with pre-seed and seed stage companies.

A lot of it is around product market fit and trying to find that, , Getting the feedback loop from the health system then sort of the next step is the venture funded. So these are typically companies that have product market fit and they are ready to ramp up their sales and marketing teams and move into commercialization, both with Cedars, but beyond.

And I would also say that the lens is slightly different. , in that you do not have to have a contract, a pilot or, , plans to have one in the near future to be a venture funded. , it could be that you're interested in talking to a subject matter expert in having a close relationship, running a clinical trial, using a dataset, , that Cedar Sinai has.

And so it is less strategic than some strategics, if that makes sense. Interesting. What area? So, , venture fund, what, what level of company are you looking typically? Series a, so we'll do a little bit of later stage seed, and then we can do series B as well. I would say it's more opportunistic as we get past.

Yeah, so we're keeping it fairly broad. , and that's purposeful. And so the way that I think of it is it's kind of 50% talking to folks across the street saying, what are your problems? Let's try to find those solutions. And then 50% of it is just listening to entrepreneurs and saying, where is healthcare going?

What is this system going to look like in 10 years from now? And how can we, , help to further that essentially? And so with. You know, it still is what I think of as venture category companies. So digital health, health, it FinTech and healthcare, data security, , and AI and ML applications. Those are some of the big bucket areas, but we try not to be too defined.

, otherwise I think it has too much overlap with, , digital strategy where those things do overlap, but they're kind of different purposes within the organization. You're looking at outside of Cedar. I mean, you're listening to. Exactly. You may invest in the company that doesn't necessarily mean that company is going to get an opportunity as Cedars, although you would like to see exactly.

Yeah, exactly. And we're pretty straightforward that it's not, , you know, sign a term sheet with us and then there's a deal the next day, just because you can't line that up. And I think like, like practically you're selling a product into an enterprise customer and there's stages to that. , but a company wouldn't want to take our money unless there was some value in having dialogue with word.

So it's the innovation side of Cedars pretty well known. I mean, it's, it's a very innovative organization there, but there's a couple of those organizations in healthcare, right? You look at, I mean, , essentially for doing this a long time, such ventures, you have, UPFC also has a pretty successful track record of doing this.

, Providence has invested significant amount. I know I'm missing somebody, who's going to be offended, but, , is there some aspect in which, you know, what everybody else is doing and sort of. Yeah. So, , I'm fairly new to this exact position. , I started at the beginning of this year. And so one of the things that I did when I got started was, , I actually talked to another fund.

They are basically their LPs, it's all strategics. Many of them have their own funds. And so I just basically set up a series of interviews and I said, Hey, what's working for you. What's not what would you avoid? And it was. Amazing how eager people were to share their learnings and kind of like add to that communal knowledge.

It was act, it was heartwarming. It was amazing. And so, , that was sort of the first six weeks on the job taking learnings from other strategics, taking learnings from outside of strategic and in just typical venture capital and then saying, okay, I think this is our starting place. We're going to make mistakes, but at least we feel good starting here.

And that's what we're doing.

, I love this about healthcare, by the way. So I started calling all the people who I, who had had established product tests. I said, Hey, what's going on? How are you doing it? That kind of stuff. People are so helpful. It's amazing. It's I was like, wow, you're just spilling the tea. This is great. Yeah. And so, yeah, I do it a certain extent, , you know, later on there, you're going to be on panels with them and we're gonna be talking about, Hey, I'm looking at these companies, that kind of stuff.

There should be a sharing of knowledge. , Success metrics. What does this look like? I mean, do you have like a series of metrics that you're looking at? Yeah, I mean, so the fund is, , is going to be spun off. And so I think that the success metrics will, in some ways look similar to success metrics of a venture fund, but then I think that parallel and equal to that, it ties into the charitable mission of the organization.

And so that is all about. And highest quality patient care and improving outcomes. And so, and just furthering innovation in healthcare. And so those are, , Swisher, you know, they're not hard metrics, but I think when we literally look at kind of the founding documents of the fund, those things run in parallel.

And so, , it, it just has to be aligned with our charitable mission. How does this work. Yes. Surely the prompt thing. Do people come to you and say, Hey, I've got this thing or do you like approach them and say, Hey, I'd like to take you to the problem. Yes. And is the answer to that kind of everything under the sun.

So, , just having a lot of relationships with startup hubs, trying to, , make ourselves open to conversations. So you feel where the action is where the like, here, , most exciting thing about this conference or thing you're you're oh, , they have a. What is it called? Funding, founders meeting or something.

And it's just a great time to sit down. They're quick, 15 minute conversations you to meet CEOs, hear what they're working on. I think that it's like a nice bite size amount of time where you're figuring out is it worth it for us to have a second meeting and some of them, yes. Others? No. And I kind of, I just love that ???? rapid fire and hearing what people are working on.

Fantastic. Thank you. Yeah. Thanks so much. Yeah.