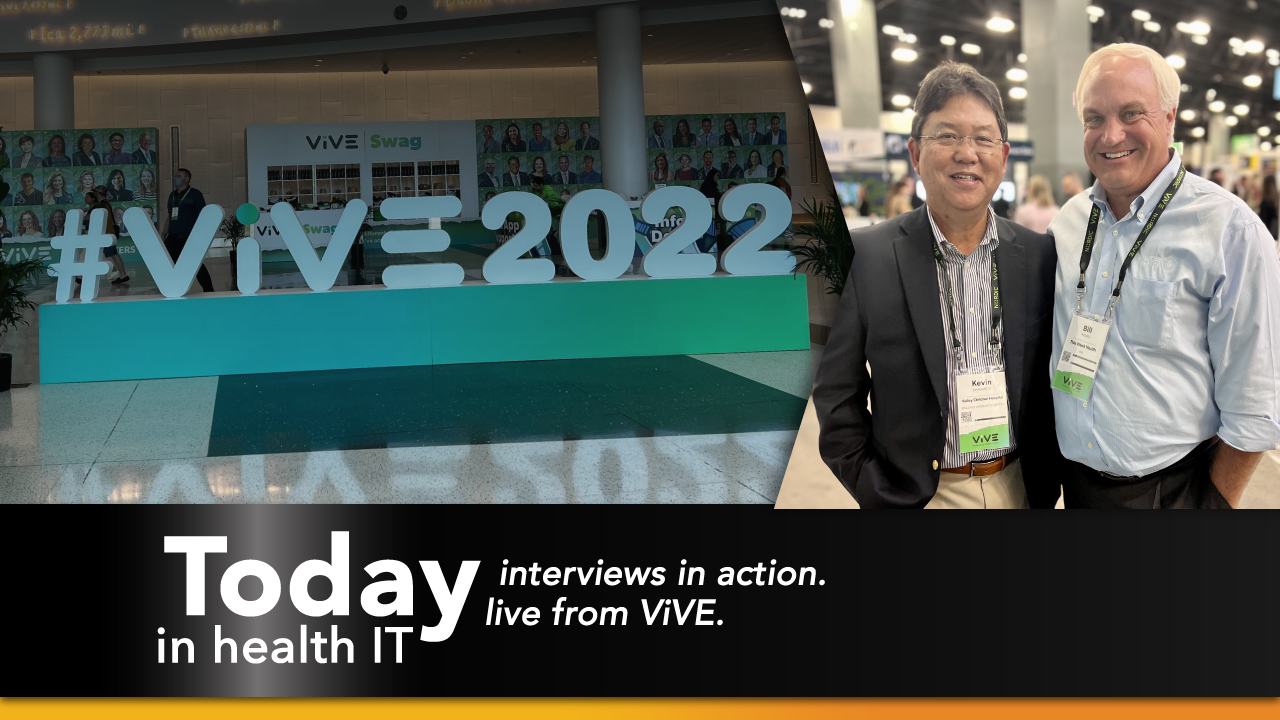 Innovation at Valley Children's with Kevin Shimamoto, top 10 CIO golfer in the country. I hope you enjoy.

All right. Here we are 5 20 42. We're finally on the floor, the showroom floor, and we're here with, , Kevin Shema from, , valley children's hospital. And, , one of the top 10 CIO golfers in the, , in the country. , so laying the gauntlet down, actually I played with, , Kevin yesterday in the, , uh, task force, , fundraiser.

plus thousand dollars now, which is fantastic. It's absolutely

great. I interviewed some of those, some of the people on that task force last year, they put together some runbooks and some really great quality content and they were making such huge progress. And then the pandemic hit and it was a, it was a real jolt to the system.

There's, . You know, we put people in isolation, the amount of opioid deaths has gone up. Fentanyl has been a problem and whatnot. So it's great to support ed Kopetsky in that, that group and do that, not the least of which we got to play, , play golf together. Pretty well, we were 17 under while you, you and chipper were 17 under and I, I got to get you drinks

a drive a year, draining their putts man.

Long putts. Thank you. I had to pull that out of you. So I appreciate that now. , so Kevin valley children's is, , it's California. Tell us a little bit about your area.

Hillary's is in the central valley of California, right in the heart of the San Joaquin valley. , kind of like geography of what, where we do, we handle close to 50,000 square miles in utilizing, , a whole area of the integrated delivery systems that are up and down the 99 corridor.

One of the things that we do, , is obviously patient care for the pediatric side, which is really, really well needed in the valley. , probably around 1.3 million, , patients. Child's or pediatric patients, , that we handle, , in our, in our area. , we handle probably nine to 12 different counties. So if you look at 48,000 square miles, it's all a lot of territory to cover.

when people hear valley children's they think Silicon valley, but it's not. So that. You are almost the rural health care of children's hospital, I would say.

Yeah. I mean, we, between 75 to 80% Medicaid Medi-Cal patients a year. So we're, we're very high area where the need is really for the people that are less, you know, have the ability to get healthcare.

So what's, , what's top of mind right now. What are the things you guys are worried? Obviously, cybersecurity is top of mind for every absolutely

all cyber security is always on the top, but right now we are. Going into our second year of epic, a conversion from, , another, , , EHR to epic

and it's second year.

Yeah. And so you made the migration in the middle of the pandemic. We were

the first organization, I believe by epic in the nation to go to complete remote implementation, go live period. , and, , it was, it went very well. It was a very well. I would say orchestrated not only from epic, we had a second out of vendor that came in that helped us.

And we also had our internal staff on the floors and had our command center. But, , I don't think any other, , epic facility at that time had gone full go live in, , posted or remote

locations. It looks like, I mean, I'm thinking of the bill. So we, we did a, , a big EHR, any CIO of some big EHR. I remember bringing the teams together into a hotel.

We had, we had a large health system. So we brought all these people together, created the workflows, a lot of dynamic conversations and whatnot during the middle of the pandemic, all that stuff was done via teams

and whatnot. Yeah. We had, I believe six simultaneous, , sessions from a remote site. , we use the WebEx as our go-to device, , to get.

, we handle the self epic, had the same amount, probably three or four conferences open seven by 24. And so everything was handled remotely. , we had the vendor, the vendor we had, we actually chose optimum. Who was, I don't know if I can say that, but that was who we use as our, , company. And they did a great job.

We had over a hundred physicians ready to go on a go live. They basically, we had our telecommunication. So anytime we had a problem, let's say a workstation was not working. Right. That particular provider position was able to contact our, , our go live or help desk command center. They've been contacted that particular type of position they needed.

He actually was able to log into that computer system. Right. As in a very secure environment, as well as talk to that physician one-on-one. And during the time when the pandemic hit, I think one of the biggest things that we saw during that first part of bed, a lot of our surgeries, a lot of our providers did not have a schedule set point.

So it was probably the best time to actually get the position to get trained in. I'll tell you what, , the satisfaction that's come out from the physicians area. Post slide has been.

Well, we, we talked a little bit about this yesterday. The, the, , the pediatric build is very different than the, the adult, right?

, I mean, do you find that to be a challenge? I mean, there's a lot of health systems now on, on Cerner or epic at children's hospitals are, I mean, is there a lot of, , I want to say templates, there's no such thing as a template because you have doctors showing up, but

we went, we stayed with the called the foundation.

Okay. With the epic. And obviously they have a PDF portion, even though obviously probably 80% of the people are, are probably adult care, right. 20%, maybe a little more in the pediatric area. So what I'm saying there is, you know, they get probably most of the R and D they get both, but I'll tell you what, w they've done a very good job in the pediatric arena.

I mean, epic is, , definitely we have. We call the children's healthcare association that we dealt billboards across the nation. And we meet once a month and I think 85 and 90% of them are on epic. So we that's one of the ways that we are able to communicate throughout America and get a

yes, if a pediatric patient goes from one to the other, you could use a care everywhere.

All those. You know already. Oh, well, about a year and a half. Almost two years in April. So yeah.

Talk a little bit about innovation. I, you know, I think people think, oh, rural healthcare, not a lot of innovation going on because there's not a lot of whatever, but, , but we talked a little bit yesterday about some of the fun things you guys are doing.

innovation. , we, we, innovation is a big part of our, , what we're trying to do from getting out of the. Leadership here at valley children's. And we have another program about a year and a half ago that, , six other, , providers or networks, , across the nation have come together. It's called the innovation Institute down in Irvine, California, and, , what they do, they're like an incubator.

They have 15 different companies that they bought for profit companies, and then they have an innovation lab. , and we, , put together what we call the George's lab at, , And it's gone real well. , some of the innovations that we're linked in, it's amazing what, you know, clinicians, providers, you know, technical people can, you know, they think of things.

So we have the ability to go out and actually see if there's any other competing products or even build ourselves. That's

what I love about the innovation Institute. They're really about, , fostering the creativity within your organization, and then they will support you on the back end. It's like, , you know, we'll, we'll do.

The review of any patents and other things that need to happen and they support them to bring to that. Yeah.

And you know, when you think about innovations, you know, it's not that every products out there it's going to become a, you know, a multimillion dollar product. Right. But that the part about the innovation, whether it's just making a workflow change or something that's significant that can change the behavior or, or pattern of a patient care area.

So, , we're looking at things in the NICU, you know, it's. Kids that are coming in at this world way, way, way before. It was probably time. Right. Right. And so those are some of the areas that we are looking at putting products to keep those kids alive, you know, and making them 10 years later, normal human beings, normal citizens.

You know, I loved our conversation yesterday. Cause you were that at one point you said, bill, if the work I do even saves one life, it will be well spent. And I thought, you know, I th I think that really captures the sentiment of a lot of people in our industry. You know, coming in every day and you're like, you know, it's, it's, it's are done.

And I've, I've said to a lot of people, hardest job I've ever had in my career was as a healthcare CIO, but there is a, there's a satisfaction of being able to do this

very, very much. So, , you know, , I told you this yesterday on the, when we came into this industry and on basically a data's processing, and then we got in this thing called it, well, now there's clinical relevance that we do right now.

Make direct patient care decisions, but the systems that we've put in today, I feel like we're a big part of patient care now than we were maybe 10, 15 years ago. And I think that's a big, big differentiator. What, before we had the HRS, the automations that we've gone through today, even from a clinical engineering type products from your MRI, CTS, the PACS revolution that has really changed the ability to do patient care.

Yeah, that might be, people have know it, obviously the industry and it's grown, you see what's going on here and see the groups of people that are here

just, just what is the hot topics here? You know, obviously cybersecurity is way off the top of my most and this things, how we can integrate cyber security and get the monitoring before it even happens.

So we'd get better ability to track before it happens. That's one of the things that like.

Well, Kevin, it's been great, , ???? hanging out with you and thanks for carrying me yesterday. I

Today: Designing the Job for Today and Tomorrow