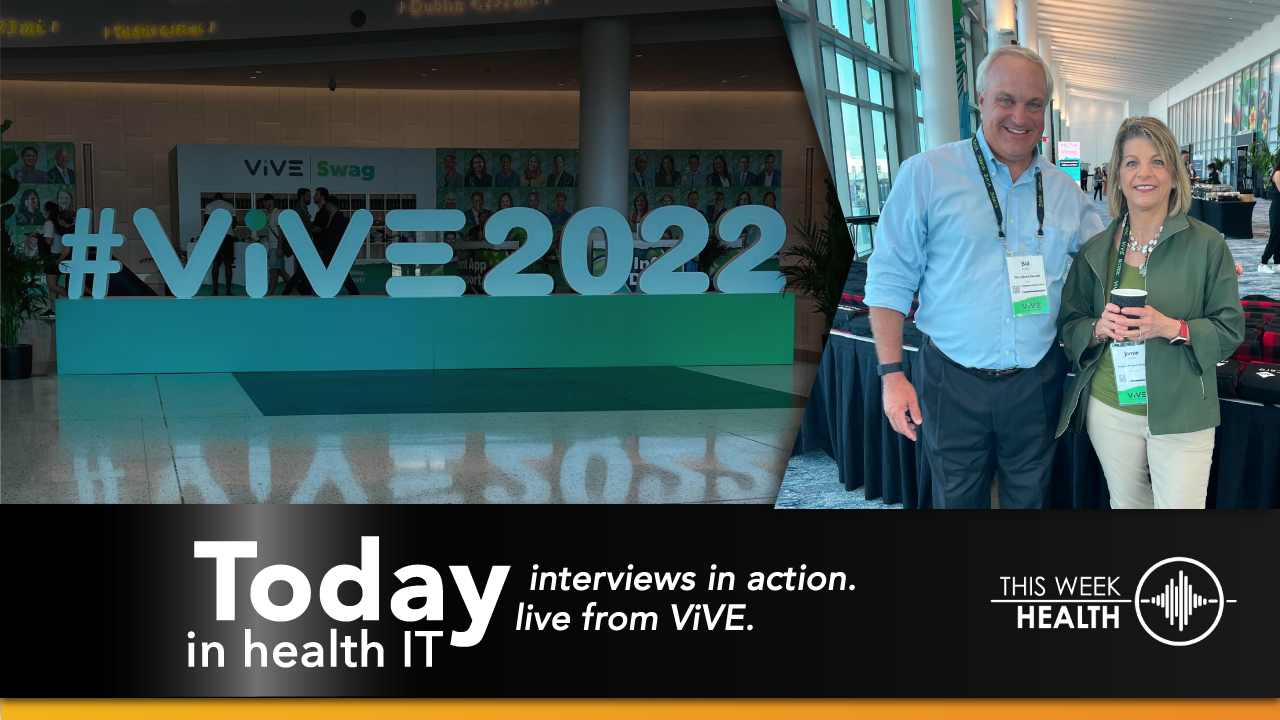 Jamie Nelson and I discuss return to work and digital pathology at the VIVE conference. I hope you enjoy.

Today and interview and action from the Vive event down here in Miami. My name is bill Russell. I'm a former CIO for a 16 hospital system and creator of this week health, a set of channels dedicated to keeping health it staff, current and engaged. We would have thank our show sponsors who are investing in developing the next generation of health.

Gordian dynamics, Quill health towel, site nuance, Canon medical, and current health. Check them out at this week. health.com/today and now onto our interview.

Alright, here we are at a chime in vibe. , we're here with Jamie Nelson, with the hospital for special surgery. , Jamie, nice to see you. Yeah. , you have your coffee, you ready to go going? , we are early morning today.

We're in front of the, , breakfast set up. So looking forward to the. So what's what's top of mind what's going on in New York city? Well, New York is back. , there are, I mean, I'm going to an event for city meals on wheels. Next Sunday, patients are coming in, businesses are opening up. There's no more masks in schools.

You don't have to show a COVID vaccine to get into a restaurant. So New York city is coming back. So that's really exciting. , my daughter is actually there right now with, , on spring break. So spring break, she decided to go to New York city because it's, she loves cities and it's been so long since.

, I, in her words, since it's felt safe to go, well, tourists came back a few months ago. What I'm looking for are international tourists. That's what we're missing still. So, you know, but the city is coming back, so we're very happy. Okay. Has that impacted your view? I mean, you guys do, , orthopedic surgery amongst other things, but mostly orthopedic surgery, only orthopedic surgery.

, has that impacted your business? , insurance mix is different because you don't have as many commercially insured people coming into the city because they're working from home, not in the city. So often they'll, you know, healthcare's is local. We know this, so we are seeing a change in terms of the mix of insurances.

So as people come back to office, we're going to see more, I believe of our normal mix, but you guys were international as well. Yeah, so international stuff that will come back. , you know, we, we stopped it for safety reasons then of course, you know, just practically people couldn't get here. So that's going to pick up as well.

What's top of mind, what are you guys working on that you're excited about, right. This moment, cyber. , we are, , we are very concerned about what's going on. , I was listening to your podcast this morning, getting ready and the idea that, , the internet is an international battlefield is, is, is real.

And, , we are being very, very careful, , , we're on heightened alert. We're working with our partners. Accenture's our major partner, but just making sure that we remind our end users that they are, you know, the foot soldiers in this, and they should use their S their cyber hygiene not open up emails.

They're not expecting those sorts of things, but we really are on higher. , we are at, we are thinking about, , ERP. That's very exciting for us. That's something more forward-thinking, , trying to come down to a vendor selection and get moving on that. So, but I do want to talk to you about digital pathology.

Yes. Digital pathology. So extremely exciting. This stuff that you did. So you shared a year ago, a year ago, that HSS, , was the first hospital to have FDA cleared like a scanners, , epic beaker and cetra digital. So now when our, , sir, our pathologists go in, they actually do the diagnosis on the slide, on the computer, on the screen, not with a microscope.

So it's really exciting. And then the surgeons can see it. They can see it next to the PACS radiology image. There's so much more information sharing. It's it's, we're very proud of this. Does that take care of 90% or is it is a pretty cool, we're pretty close to a hundred percent. , we have, I think 10, nine or 10 50.

And we got them on board very quickly. And in terms of, , remote work, pandemic work, the fact that if something does happen again, these pathologists can work from home. It's really, it's just a fabulous. So you said FDA clearance. So that's one of the hurdles to get through. If people are looking at exactly the, , and that w the FDA clearances for those three pieces of the, of the pie.

So it's epic beaker it's sector, PACS, digital pathology, and then these legacy. Okay. So if I were doing like two out of three of those, I would still have to go through that process. So is that, is that a difficult process or? , well, it wasn't us, it was sector happy to go through that, but it takes time.

, so, , I think we were on this journey for about four years from start to finish. So the last time we spoke, you were, , entertaining bringing some people back into New York city. This is one of the things people don't understand about New York. If workers don't come into New York, That's like the lifeblood of the restaurant suffer.

The shoe shine person suffers they person in the corner deli suffers the whole, the whole economy suffers without, you know, as I said, we had a difference in our insurance and next without, , business people in New York city. So it, we need to be back in the city, going to bring our, , back office staff.

So it finance, marketing, we were given latitudes. Most of us are saying two or three days a week, and we're giving people the flexibility to pick their two days. It can't be two different days every week, but two set days. So people have some sense of control and ownership around their own schedules, but they want to come.

When they were remote, they still had to have childcare. Right. Even though they were. They did have to have childcare. And it's in our policy that remote work is not a substitute for childcare, but given the pandemic, we were not knocking on doors, check the doors. We have to be flexible, showed up in that team.

Many, many kids showed up in meetings, but we understood what was going on at this point. It's a new reality. And you know, you have to have the correct office space. You can't be sitting on your couch with people running around, you know, you have to be able to focus. So now that we're moving to, this will be a little more we'll remind people that they do need to have childcare elder care.

, but on the flip side, it's okay. The three o'clock you want to go grab your child from soccer and come back online at four that's. Okay. It's a new world. My, my, my daughter, our camera person, we were talking on the way over here. How is work going to change moving forward? Because we're looking at, , Google is coming back to work.

Apple's coming back to work. And one of the things I was, I was saying to her is I think what we're going to see is a lot more flexibility. You might see like, Hey, the month of July, everybody works remote. Cause we, we have the policies, we now know how to do it. People now know what it means to have like sort of a disciplined structure around their life.

I mean, you could see a lot more flexibility. Could potentially see four day work staff member, bill, say to me, cause I'm doing focus groups with our teams running through to make sure we're, we're hitting, you know, w it's important to people. And he said to me, when are we going to get to a four day. And I thought, why couldn't we do that?

But that would have to be an HSS organizational. I'm not sure it goes on for days with that's the thing people don't recognize is, , they're like, well, why aren't those is doing this? I'm like, you don't understand those are, I mean, those are 20,000 person organizations. It's not like the CIO can just say, Hey, here's the policy we're going to do over here.

Right. There's a lot larger. And I'm always cognizant of the fact that. Onsite health care providers. And there's a big part of our workforce that is onsite every day. And partly out of respect, partly out of comradery. , I think that we have it's the onus is on us to be onsite as well. At least for part of the time I've taken a little heat because I would like, I mean, I really liked having people in the office.

, I, I enjoyed the, , the energy of it and the dynamic, , but I understand commute, sir, commute. , people have experienced more family time, I think, than they have before. There's also, , articles that have been published about the benefit of that split, that physical split between work and non-work. , and the commute provides that to many people.

I think there's a, a cognitive shift that does not always happen. , I couldn't imagine I, I raised three children. I couldn't imagine working from home and then going direct into parenthood without having that break. So the commute, if you use it well, it could be very. Fantastic. ???? Jamie, thank you for your time. 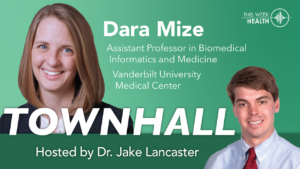 How are Clinical Informatics Fellowships Setting up Hospital Systems for Success?

Today: Designing the Job for Today and Tomorrow 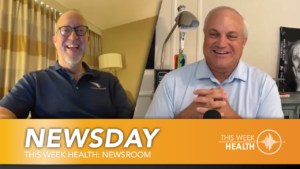 Newsday - How Exposed will Health IT Be with a Down Economy and Cybersecurity Worker Shortage?

Today: What I'm Learning in Running a Business