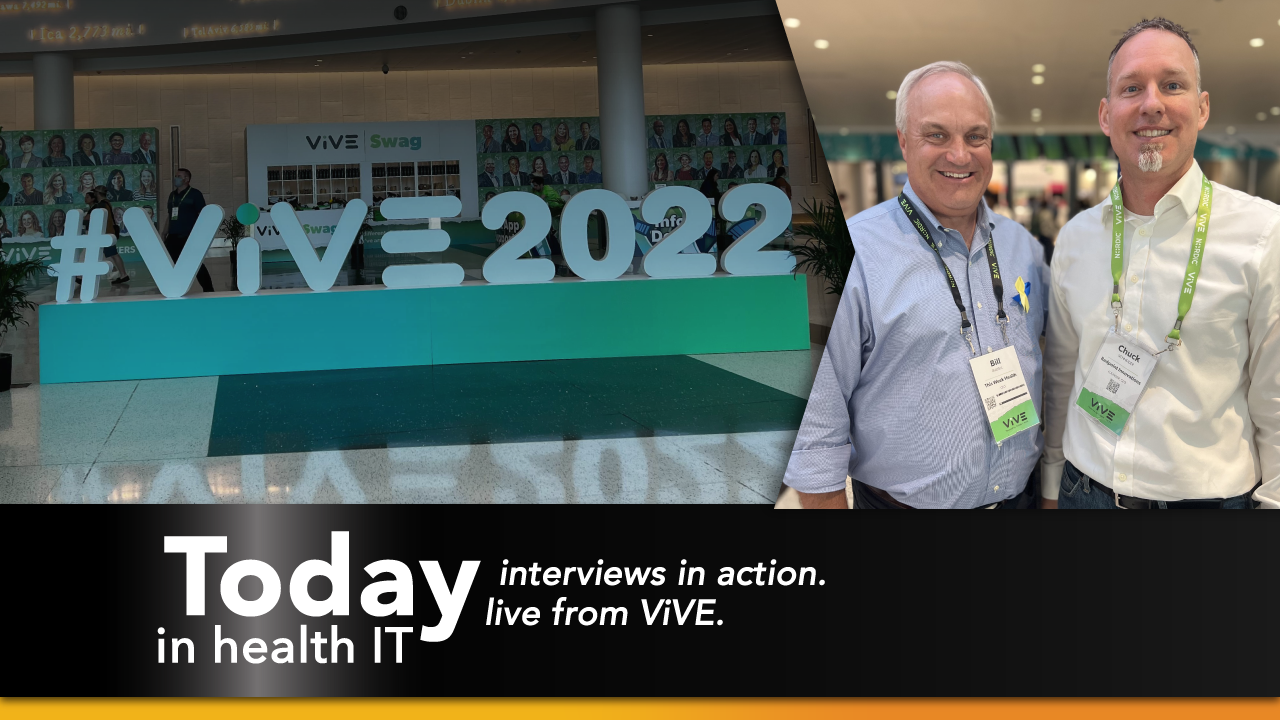 When a CIO stops you in the hall and tells you to talk to a company because they have an interesting solution. You sit down with them. Check this one out from Red Point Innovations.

All right. Here we are from 5 20 22, and we're here with Chuck Schneider with red point innovations. Chuck. Nice to meet you. Yeah, same here. Great. So I am just meeting you. The CIO stops me in the hall and says, you've got to talk to this guy and I'm interesting solution and I love bringing interesting solutions

to the community. So tell us a little bit about red point innovations, what you guys are doing. Yeah. So

what we're doing first is we're observing, , user ordering patterns and really personalizing that and then billing order favorites back into the system. So help to reduce the physician training. So as we know, satisfaction and burnout is a direct correlation with the amount of

technology platform sits there. I don't want to use the platform word it's overused technology sits there and watches the ordering patterns. It picks up on those patterns, right. Per user per. Oh, so we're in individualizing.

All right. And then it's, it's actually building it out.

Yeah. So what we do is yes. Then we'll take RPA and then we go build that back into the system for you.

Yeah, it's interesting. Cause when, , when I got stopped, it was, it was a. So what's, what's the biggest challenge we're facing burnout. Okay. Clinician shortages burnout, those congrats. Okay, great.

So that's step one.

And so then what we're going to do is build on top of that. So we go and look at, by diagnoses, which orders are placed in an order set and which ones are being placed ad hoc. So not all clients have all the order sets built that they need. And so then we can go identify here's six orders that keep getting placed together, and there's no order set.

We present that back to the hospital and say, is this something to consider to go build? Yes or no? And again, then we go build that. We don't want to just create a task list. We can go build those order sets back in for the, the hospital.

So here's what I like about it. So it's passive, it's just sitting there watching crisis activity that's happening every day.

Correct. , but you're also building an automation. We can build it automatically, or we can just surface it and give visibility to the team and say, You really have an order set here. You just haven't built it yet or, or, or

what, yeah, exactly. And so, yeah, some, I mean, there's infinite number of order sets that can be built that takes time and money.

And so not everything gets built out, things change. And there may have been an initiative three years ago where they built out a bunch of order sets. And now maybe they're doing different therapies or different approaches that they didn't have three years.

So then what we want to layer on top of that then is starting to go compare that against best practices.

So you may have built your order sets out five years ago and something's changed. And the industry has learned that set a place in these five labs. Maybe these two labs were more effective and more cost effective. And so then we can go and present here's some options, therapeutic alternatives that you could potentially put back into your order set.

Are you starting with a. A set of defined use cases, or is it one of those we're watching all this stuff and the use cases just keep coming up.

These cases every day, we keep coming up with more and more to build on top. So the first use case is the order favorites. That's a very concrete example. We're getting feedback from Nebraska medicine on this.

, and so that, that's what we're starting

is with that. So personalizing the EHR. So the obvious question that the listeners are going to ask. Which EHR do you work with

at this point? So we're focused on epic and Cerner

epic concern. Okay. And, , building this stuff out, the, , you talked about RPA is RPA actually integrating back into those two HR spelt.

So once we get the, basically the data and the conclusions, we want to make sure we're leveraging the smarts that are already built in epic and Cerner. So we go use RPA and use their own tools to build that back in. So. It has the same behaviors as it was natively built by

beings, where where's your company at and its life cycle.

, so we're, we're a startup, so we're very early. , and we're partnering with Nebraska medicine right now. So we we've just been starting to pull data and starting to analyze those first batches of, , quarter patterns.

So, , angel investors, I mean, we're bootstrap where,

, Nebraska medicine is an investor and our first customer as well.

So they, they helped us with our seed round. , and so working together.

Fantastic. So, , which entrepreneur, what, what made you heading this direction?

, so I was previously, , worked for Cerner for 26 years. So I was one of the original 20 architects that built the millennium EMR platform, , built the ordering system for, for orders.

A lot of the patient lists a lot of the patient information stuff within the chart. So I've been in the industry a long time, , and really. You know, what else can we do to help user user satisfaction? That was one thing I was always passionate about. And so I

took the leap 26 years with Cerner

Wow. When did you leave

months ago, man. That's a, that's a long ride with the, , with the same company.

It is, it is. And it's been a great ride. It's fun to see Cerner and grow. , we went through, I mean, it was literally still paper and clipboards in the nineties.

It was before the.com. Right. , and you know, through Y2K and that whole history. But, , yeah, it's, it's been great. Watching,

watching things grow. So red point innovations, where are you based out of Kansas city, Missouri. So you're out of Kansas city. We are. Yep. So, if anything happens with Oracle and whatever your, your company can take over those buildings and whatnot, I don't want, I don't want to say it that way, but there is some fear around that actually.

I mean, people are like, Hey, what's, what's going to happen. But I think with the, as I look at it, I'm more tapping into your experience here. As I look at it, I'm thinking, Hey, with the, with the labor shortage. All the really smart people that are in kids' city. I don't foresee that happening. I can't imagine.

No. I mean, kids are sort of just got a solid talent base. , and, and Oracle is going to provide a lot of the leadership as well. So, I mean, I think they have a lot of options they didn't have before. , and so it's just a matter of two big, you know, acquisitions are a big acquisition like that. There's a lot of leadership and strategy point and I'm sure that's

I'm sure. I'm sure there's a lot of anxious in Kansas city around this. Absolutely. Absolutely. Yeah. ???? It's it's interesting. Hey, fantastic solution. Sure. You're taking the time. Yeah, you bet.