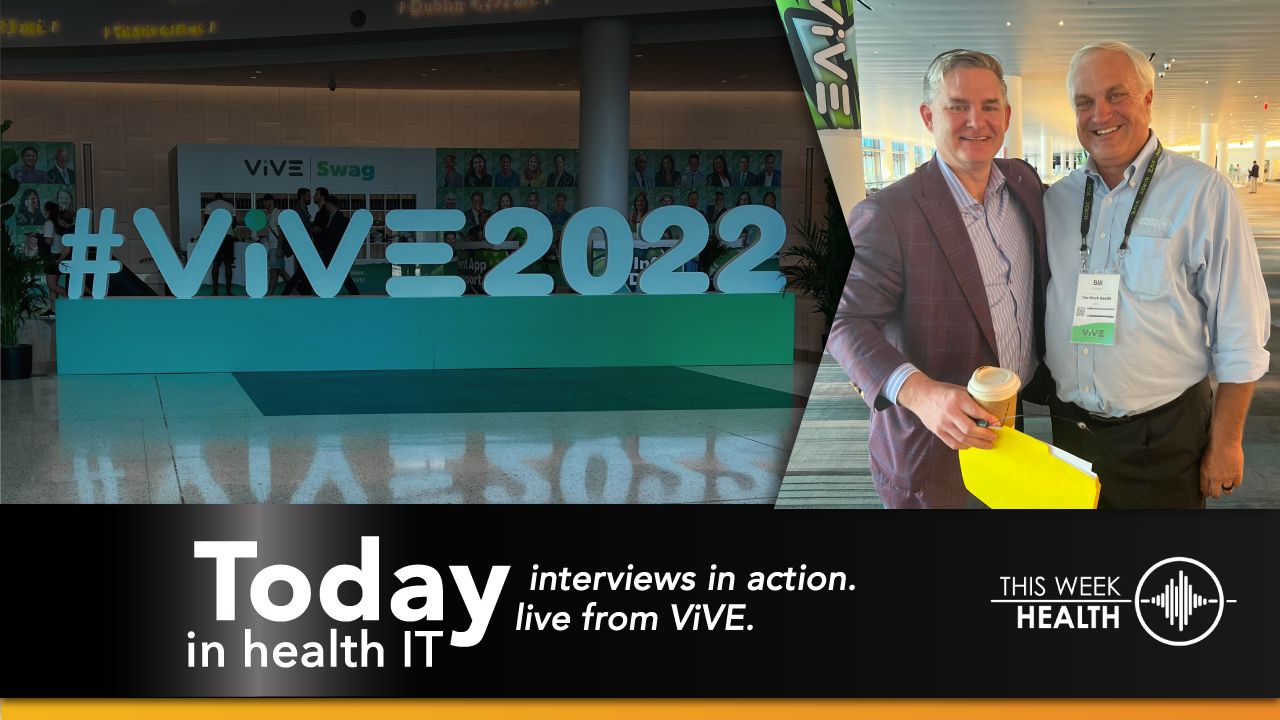 Epic on Azure, not only possible but happening at St. Luke's in production. Chad and I discuss on this episode from VIVE.

Welcome back to the show. Good to see bill. Has it been awhile? It's been a while since you've been on the show. I don't know, maybe a

I don't know. It's not like we haven't seen it. We've seen each other. And my, uh, my father just got out of, uh, your hospital. I always appreciate the work that you guys are doing.

And he's telling me that the great outcome, the great work that's going on at the Anderson campus. You guys keep expanding that thing. It's, it's really kind of amazing.

Yeah. It's a very beautiful. Integrated delivery campus there with both inpatient outpatient, it's got a, it's got a, uh, organic form.

There's only a few of them like that, that produces all the vegetables and everything that we eat throughout the facilities that we have. And then additionally, it's got a walking path it's very like holistic and it's a thought process and it's just a beautiful campus on a, on a,

is there anything we do now in a new bill?

I'm going to talk to you about the cloud cause I have to, but is there anything we do in a new building now? That has changed in the last five years that you're like, Hey, we we've rethought how we do

these buildings and I'm having some meetings about this tomorrow, but I would say the main thing has been integrating the virtual in side of the hospital and a trait that, you know, remote consult experience that tele sitter experience.

So just having the virtual and the physical come together, uh, is really what we've been very, very focused on in our new hospitals. And as you know, but I'll tell others, uh, in. When I came to St. Luke's 13 years ago, we had four hospitals. Now we have 13, and most of those have been brand new built. We only acquired three during that period of time.

So six of them have been small hundred bed hospitals that we built. And so we've had a lot of time to kind of iterate and innovate within those. So it's, it's pretty exciting. And obviously we have all the kiosk and patient workflows and all that kind of stuff nailed down. But, uh,

yours is an interesting market.

You have population centers, but then you have like these remote population centers. And so you guys really are taking a, an approach of going into those communities, identifying what needs need to be there. And if you drive through some of these communities, you'll see, I literally saw St. Luke's on four corners of a, of a F it was at least three of the corners of the intersection.

Yeah. I, I thought to myself, that's really interesting. That's that's an organization. That's looking at the demographics, looking at the population, trying to figure out how to. That community?

Well, our CEO has three simple strategic points. He's been the CEO for 35 years. I think the longest standing CEO in the country is a perspective is three things, high quality, low cost, and ease of access and his ease of access strategy.

It's obviously digital, but it's got a physical footprint as well. I mean, you want to, for most of your care, you want to go as local in this convenience as possible. You don't have to be drug across. And then when you need specialty care, you can go. For you need to go to, and that's, our strategy is really meet you at where you're closest to home and then bring you in when you need services.

us. And you have to support that with a digital strategy. We've talked about this a little bit. I'm going to come to cloud. Don't worry because I know you're preparing for your, whatever. You're, you're giving a talk here on this. And, uh, we just did a webinar with your associate CIO is fantastic.

Um, but your, your digital strategy. So you have this, this platform that you're trying to augment access to. Now, back in the day, I worked with you a little bit and you guys had, uh, you took epic, just broke apart. The components brought it back together, but then you, you layered a whole bunch of other things around that.

Is that still the

strategy you're still layering? We'll have, you know, if you look at it, we have a combination of epics back in. Obviously they provide a lot of functionality within my chart. We want to leverage those capabilities where we can and then where we really think it's differentiating or transformational, we'll write our own capability on that.

So we've increased early. The scheduling experience, as we know that that that really needs to be sticky. And some of the workflows around order follow up, um, with tech Omni, the omni-channel concept where we're doing text messaging, et cetera. So really enhancing those experiences, both on mobile web, on texts and over the phone digitally.

So we have, you know, a Twilio dynamics, epic strategy where we've been integrating and developing around all those three capabilities for our guests 27.

Well, and that's the thing I was going to say. I mean, you were one of the, one of the first CEOs who was sort of stepping back into the, Hey, we need some development development capabilities, not necessarily in house all, but you need access to the, you

know, my background, but for others might I, I was in retail as a developer for awhile, and I don't think people know that, but I think that experience really told me that, Hey, really?

Where the game is that it's in the consumer space. And what we can do in technology is deliver a differentiated. To that. And so if we're going to develop somewhere, that's really the edge that we need to be on. And that being said, we needed to leverage all the trans transactional capabilities that our vendors bring us, but also live on the edge and bring, you know, great experiences to our patients.

so the cloud, uh, Christina did a great job spelling this out.

So really at this point there's only a handful of organisms. That have moved to well it's cone health. You, um, there's another one that has done it, uh, for Dr. There's a couple, I've done it for

DVR, but full production. I think it's

asking cone health, right. And, uh, on Azure production, full line. And it was a, it's really interesting.

What I'm going to tell them is basically it's possible. Uh, for us in our strategy, I think it's all about where you come from too. So for us, we had two different data centers co-located and it was either forklift our hardware or migrate to the cloud, or look at another managed services.

And since we do our own managed services, that make sense from a cost basis, stand for, uh, for, for us to look to the cloud. Now we didn't have anybody to go against us say, was it cheaper? It was a gut instinct of like, Hey, we think it's going to be cheaper. Let's go after it. And it has been we're 25% lower on a run.

Perspective. And now it's op ex versus cap ex and we did a whole, you know, we use, we use Aptos product with Azure tagging and everything to look at our cost basis, but we're, we're early on. As you know, we went through a journey January to December of migrating 20 environments over. So we're just live a few months and we still have a lot of cost

It was interesting to hear Christine what's one thing you would do different. And she goes, I think it would be more aggressive. We were. So because it hadn't been done by anybody before we sort of stepped in slow. And she goes now, do you get to the other side of it? And you look back and go, that was not as difficult as we thought it

Yeah, we did it with seven people. Uh, we back-filled a couple of engineers and, you know, they would learn how to do it. And we did all of it internally. We helped a company, helped us with the external, with the design and architecture. And then we, we did it all over a 12 month period, but we probably could have done it in six months, but the team, it definitely burnt the team out too.

Cause there's a lot of, you know, a lot of learning through that. So. We could have done it faster, but allowing the team to learn, I think is important as well.

Are you, uh, that's part of a larger cloud strategy, correct? I mean, I we've talked about this Florida

Okay. Well, that's an issue that takes us in a different direction.

We're almost out of time, but I would love to follow up with you about, you know, kind of where I see things going and where. Trying to hit edgiest cases and stuff like that.

Thank you, sir. Appreciate it.