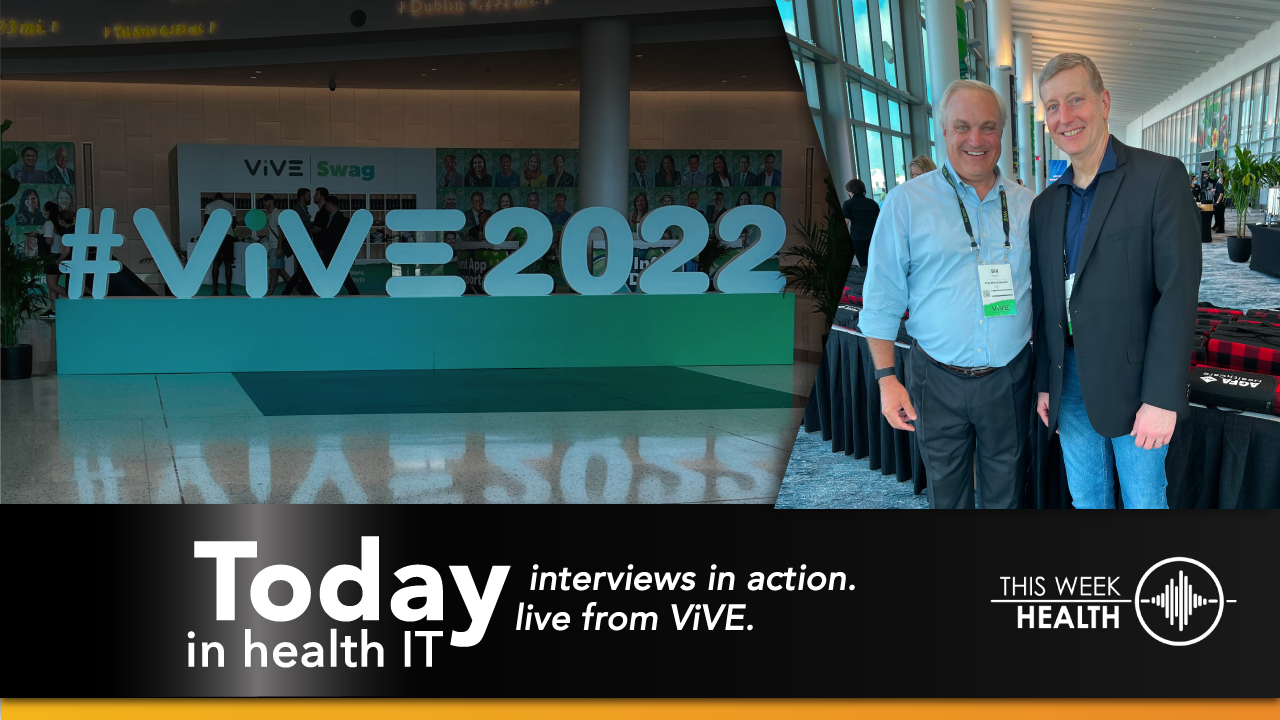 What is top of mind at Geisinger. People. That is the recurring theme amongst healthcare leaders. Today we explore the topic with John Kravitz, CIO. I hope you enjoy.

Check them out at this week. health.com/today. Here we go. Right here. We are from a, the chime, , spring form. W what are we calling this thing? It's vibe vibe as the spring 5 20 22. So, , we are here with John Kravitz with Geisinger, , health C. , welcome to the show. Thank you, Paul. Really appreciate it.

, I love these, these quick hits. We haven't talked in a while. It has been awhile. We're gonna have to have you back on the longer show where it get 45 minutes to hear what's going on. , what's top of mind what's going on, right. I think, , staffing is the biggest concern. You know, retention, retaining staff is a big, big concern for us.

We're down about 10% of our overall it staff because of the great, you know, resignation people leaving and come remotely everywhere. That's a big, big head on us and the work doesn't stop. Well, you know, one of the interesting things actually, I'm, I'm glad I'm talking to you because one of the things I, , dynamic I've seen is you're not exactly in, , the major cities per se.

You're in between the major cities. Exactly. But you have really great staff who are epic, trained analytics, , popular. Everything. I know CRM and you name it. We've got all that stuff. So now I can come in from New York city hires your staff away, offer them New York city rates. It's, it's hard to compete with that.

LA rates, San Francisco rates. We have all that. Yeah. It's hard to compete. So it can't all be about salary. It's gotta be about the culture of the organization, the way you connect with your people. , work-life balance is big work-life balance is the biggest factor that I think people are feeling because we're down staff.

So we bring in contractors. And contractors will do what the contract have to do, but the rest of the people that are on the team want to round it out, make sure it was perfect, you know, for our customer, for our patient, you know, that's where, where it's all about. So we're concerned about that. So are you, how are you doing culture, army?

Are you bringing people back? Are you, we have a hybrid situation where a lot of leaders are in the office. They're not even full-time in the office. There are hybrid to myself, included. I, I drive a good distance to work so I can work remotely when I need to. But being in the office want to have to, for me, where's your headquarters?

We're in Danville, Pennsylvania. So it is central Pennsylvania, Harrisburg. , it's about two hours north of Harrisburg, an hour east of state college. So that's dead center of the state. We're an hour east. And you have a long commute. I live in the Northeast section. Wow. The state. Yeah. So your, but your people don't have this the same.

We just interviewed Jamie Nelson and she was talking about bringing people back into New York city and the commute and all those other kinds of things you don't necessarily have that I would assume we had people, you know, even before pandemic hit, we had people working in Houston and California all over working remote for us anyway, doing development work or application support.

So it really didn't have that impact on us. , and they liked that flexibility because their spouse may have taken a job. They could be a trailing spouse work remotely and it worked great. But the challenge for us has been really a lot more now because of the freedom and big increases in salaries. Like you talked about that we were talking with Andy from atrium.

They now have a 48 state hiring strategy. Oh yes, yes. I have. You guys expanded beyond Pennsylvania. Obviously. You got, usually we're in every state, every state and we're going international next. I mean, we have to, we've got to go off shore and do a lot of that work for support. , the clinical staffing shortage has have you, as a CIO been approached to say, Hey, yeah, can we do yeah.

It's technology. How do we support that? Especially in areas where, well, we've done a lot with facial recognition to move and even, even sports staff in clinics. Right? So we use facial recognition for our patients to identify them and improve the whole work stream process so that we have less touch points with patient account representatives.

Scan insurance card scan driver's licenses. Pull that data into the system when they change, simplify a process and have to have less people on the front end because they're having a hard time firing, hiring, hiring, keeping those people to anybody and anybody. But it is the worst by far. , the, , I think I remember you and Chad, Brisendine having this conversation of, of.

, that whole check-in process being highly, highly automated. Yeah. So when you say facial recognition, is that like Irish scanning or would it, oh, it's facial scans. And so you can even have a mask on, it could scan your eyes, your forehead stillness to, and it pulls up. Whoever's the H H I M person is sitting there and boom, there it is.

Well, what it is is, , we go through a process first where you lock a patient in, , there's, you know, you have all the identity, identity, and credentials to lock them in. And once they're locked in, they're in the system. We started up with a proof of concept with that. And we have about 20,000 patients enrolled and we're going to continue growing to millions because we have about 3 million, our catchphrases.

Well, and one of the nice things about your population is it's not overly transient. Has that changed much or is it, , it's getting more and more transient, you know, especially in our fringes, cause we're up in the Northeast where there's a lot more activity, a lot of people coming in and out and up and down Southern partner, Harrisburg, same thing.

So we see a lot more. Danville, not as much, it's more of a, you know, same, same population and stays for most of our life. So population health work, one of the things Geisinger is really known for. Yep. Alright. Any, any new work being done there around analytics or, oh yeah. Yeah. There's always new things within analytics and bots and other things that we can help improve that process.

, we've been doing a lot even with, with, you know, check in with facial is one thing, but we use a lot of bots and technology with even epic MyChart. , which has helped a lot with geo-fencing and things like that, to identify when a patient comes, you know, they're here for this appointment, you'll link it together, you lock it.

And the boss starts communicating with them. It works out pretty well for us. So your role with chime, or you finally I'm in my final year as foundation chair feels like that's been really a long game. Well, my chime term was long-dated for two years because of the, you know, the pandemic, obviously. So I was happy to serve.

We know we have to get to the cloud. We know we have to do telemedicine before we knew there was going to be a pandemic. Right. So. This, this conference is really interesting. I was just talking to somebody and they said, you know, what's the big distinction, the distinction I'm like, well, five was designed to be a conference company.

This is what they do. And they do it really well. Yeah. Health has been good with that and incubators, startups and other things. So we're going to have sessions on that where CEOs can go to eight, 15 minute sessions and they can, you know, listen to the elevator speech. See what things need to change, you know, understand more about a company.

Is that in alignment? It may be, it may not be, but what's nice is we have a mix of, of the standard companies, you know, Cerner, epic Allscripts. And now we have some of the new companies that are coming on. It's not just the, , the big boat, show it at HIMS where you had all these companies. Right. Plus the health conference also pulls in pharma, pulls in big tech, pulls into payers.

, and so there's the, I was looking at the keynote and it's not your traditional, Hey, let's talk about the EMR, our EHR and whatnot. No, it's total population health. That's the way we need to think. And that's the way we have to act now going forward. So this is really going to be the first. Conference ignite that thinking, which is going to be great.

And it's exciting. It's exciting opportunities having this opportunity to launch this and, you know, kind of separate what we did before come to a new way. , it's exciting to be part of that. So I'm happy about it, John. Thank you for your time. Another great interview. I want to thank everybody who spent time with us at the conferences.

It is phenomenal that you shared your wisdom and your experience with the community and it is greatly appreciated. We also want to thank our channel. Who are investing in our mission to develop the next generation of health leaders, Gordian dynamics, Quill health tau site nuance, Canon medical, and current health.

Check them out at this week. health.com/today. Thanks for listening. That's all for now.