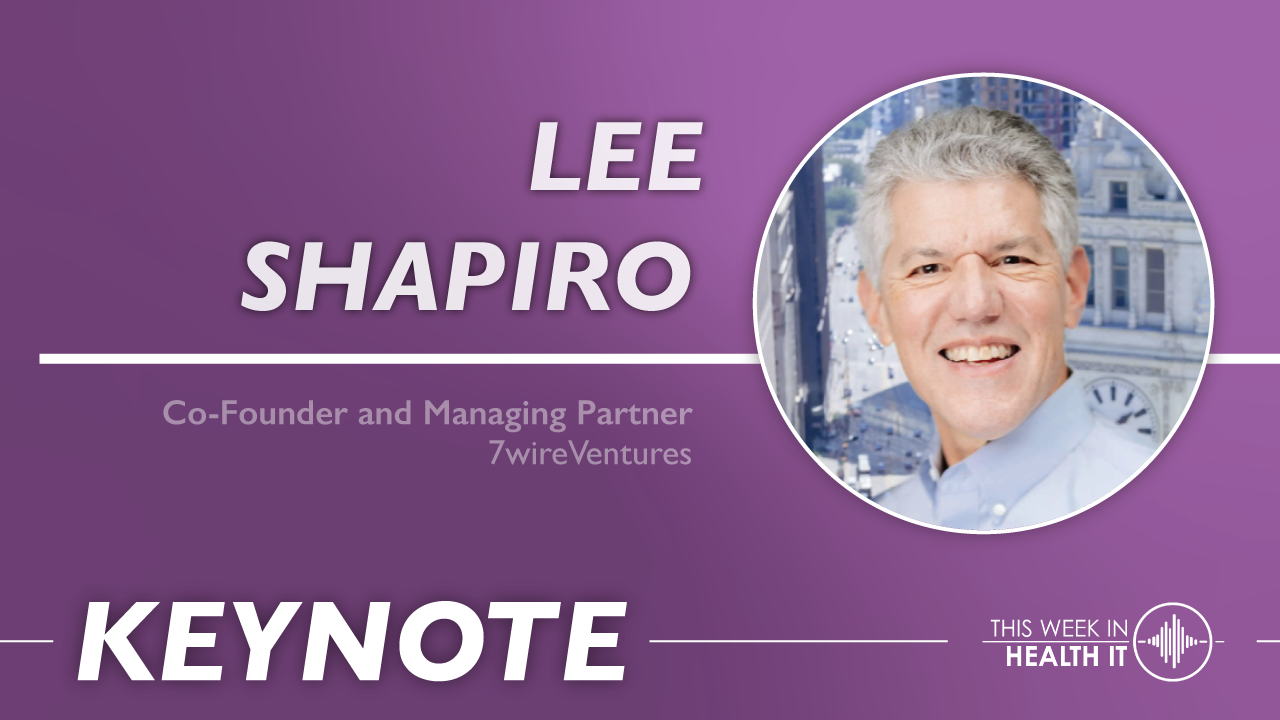 January 14, 2022: Informed connected healthcare consumer. That’s 7wireVentures mantra. How will big tech, private equity and hedge funds engage across digital health this year? Here to talk funding is Co-Founder and Managing Partner, Lee Shapiro. The concept of care is moving outside the four walls of the health system. It's moving into the home. It's moving to rural locations. “Care Everywhere and Access to Care” is a huge funding area that will trend in 2022. What distinguishes the winners from the not so successful players in the digital health space? Where does an M&A strategy make the most sense? And what should we make of Oracle's acquisition of Cerner?

00:04:30 - Put consumers in the position of being better able to manage their health. When you do that, everybody wins.

Bill Russell: Thanks for joining us on this week health Keynote. My name is Bill Russell. I'm a former CIO for a 16 hospital system and creator of This Week in Health IT. A channel dedicated to keeping health it staff current and engaged. Special thanks to our Keynote show sponsors Sirius Healthcare, VMware, Transcarent, Press Ganey, Semperis and Veritas for choosing to invest in developing the next generation of health IT leaders.

Today, we are joined by Lee Shapiro, Managing Partner, for 7wireVentures. Lee, welcome to the show

Lee Shapiro: Bill. So good to see you.

And I think we were going to go in one direction and then the audience really took us in another direction. It was really interesting. And they took us in the direction of patient centric interoperability. I think it was the discussion we ended up having.

Bill Russell: Yeah. And if I remember correctly, I was the only one with a suit and tie on at that showing because it really, it really is an entrepreneur kind of event.

It's a phenomenal event down there in my old stomping grounds in Laguna Beach. That was awesome. Tell us about 7wireVentures. What are you doing now? And what's 7wireVentures about?

Bill Russell: Fantastic. You said a couple of things there. I want to hone in on. You said you're focused on health probably more than healthcare per se. Is that an accurate characterization?

Bill Russell: All right. Now I want to, I'm going to push on your thesis here. Intelligent. I think I got this intelligent informed health consumer. Are those the right 4 terms?

Lee Shapiro: We're building that out today. And think about a situation where one of our great companies Home Thrive is helping seniors live independently at home longer.

Bill Russell: Yeah. You know, we had that baby boom generation moving through the whole healthcare cycle. And we just experienced this personally, having my father-in-law come live with us. Right. So he went from being independent, living on his own, and that really wasn't viable as he got into his late eighties.

And it was great for him. And he really thrived during that with the social engagement, but we were also able to really help him better manage his health. And we got a lot of support from the outside in doing that. So it was a win-win for everybody involved.

Get them the best possible care at an affordable price. And that's what Transcarent and their team are doing.

Bill Russell: you know, it's interesting so I invested a little bit early on when I was at St. Joe's, we invested in some companies and I've always wanted to ask someone like yourself, this question, what are the characteristics that distinguish the winners, maybe from the, not so successful players in the digital health space?

But there's three elements that I think make companies successful in the space that, that we focus on in. So it's team, as you mentioned, but when you have that team in place, we think about the three elements as being, first, create a phenomenal consumer experience. Something that people love that they're going to want to use.

Bill Russell: You know, Lee, I can't, I mean, the number of times I've sat across, as my role as a CIO. And now since doing some consulting and whatnot and said, okay, explain to me your value proposition. I mean, those are the words I'll use and they'll say, well, you know, it's this and this.

So, it has to fit into, as you said, fit into their workflow, or it has to be really simple or dramatically change some outcome that they're being measured on. That's the thing I think they get wrong the most. It's like, what's your value proposition?

We were trying to move people from paper records and literally writing some billing illegibly on a script pad and handing it to the consumer to the patient, say right, go take this to the pharmacy. And to get them to write a prescription electronically. Yes, it was safer. Yes it was better informed. But it took more time for the provider and there were no incentives for them to do it.

And there's a real benefit in terms of being able to share information with providers and to get them to act on it and see where the value is for them as well.

And so are you looking at that kind of trend where you go, Hey, look, there's going to be less caregivers and more people requiring care with the baby boom generation. Are those the kinds of things that you keep an eye on as an investor?

So it provides that wraparound set of tools to help those individuals keep their condition in control and in check, which is really beneficial for them, as well as those who are sponsoring your care.

Lee Shapiro: Ginger and Headspace as an example.

They're making progress on their own. They're going to continue to bulk up with other offerings so they can go directly to some of those sponsors and to be able to sell to them without going through some of the intermediaries.

Is that still a significant barrier? And you say, well, okay, how are you going to get that data? Do you know how you're getting at that data? There's multiple EHRs. There's multiple, you know, I mean, does that cause you concern or are we moving beyond the interoperability challenge for startups?

Well, that's, that's why I asked the question because it seems to me that the startup has to make a decision. Do I really need this data? And if I don't need this data I'm probably in a better position than if I do need this data, because now I have to delve into that world of is this clean data?

And maybe this is just the digital wonk in me, that's saying, you know, we can do this if we could just free that data. But I mean, that's my theory. I mean, shoot holes in it. Don't don't.

I fear what we're actually doing. I'm not sure I fear this in some cases. In others I do. When we bring people in from outside of healthcare, they may not understand privacy and security as well as they should. And I'm keeping a close eye on that. That's my, that's my greatest concern.

I probably do want to put my data in, but I'd like to choose which one of those three, I want to put my data and not necessarily. just throw it into all three, just because I happen to visit one of their hospitals. I, I don't know if that answers your question, but that's sort of how I'm thinking about it.

Better access for information is talked about voice interfaces that will make it easier for providers. I think what he'll learn, maybe the second part of your question is everything in healthcare takes longer than what those outside think it'll take. And so it's going to be a while before they can retrofit those Cerner applications and start focusing on those new digital tools.

Bill Russell: Yeah, that was, that was one of my learnings coming into healthcare. I set out these plans and I had the old team and I would say, you know, we'll do this in the first year.

Bill Russell: And Cerner was making some moves with New York life and others. And so they were doing integration agreements with some of those players. And I know Epic does.

Lee Shapiro: I'll ask you for one prediction.

Lee Shapiro: Does this mean that that Epic might merge with someone in the future or will remain independent as Judy looks to retire in the future?

Lee Shapiro: Well, Bill I think that you certainly see some potential there that maybe they'll catch on too, but I agree with you an open strategy is certainly better than closed.