December 10, 2021: Welcome to one of our End of Year Shows. Bill gives an update on what’s coming up for This Week in Health IT in 2022 plus a chronological look at the healthcare news that shaped 2021. The biggest stories were the pandemic, cybersecurity, diversity, equity and inclusion, the change in government and the vaccine rollout. He also looks at telehealth, patient centric interoperability, 21st Century Cures, the HIMSS, HLTH and CHIME conferences, price transparency, information blocking, care moving to the home, the labor shortage and remote work culture. Hope you enjoy!

00:14:15 - Healthcare systems took a significant financial hit in the months that they couldn’t do elective surgeries

00:19:50 - We made a significant number of mistakes in terms of marketing the vaccine

They'll be around things like ransomware, cloud, cybersecurity. They could be around you know, some aspect of data and analytics, AI, you name it. But those campaigns generally are short burst episodes. 10 to 15 minute episodes followed by a webinar. So that's going to go in conference.

So we have some CIOs who have agreed to participate in that. We have some data scientists, clinical informaticist, CMIOs and our hope there is that they will tap into their networks and talk about some of the topics that we are dealing with at a level that you are interacting with them on a daily basis.

If you want to subscribe, go to this weekhealth.com and it's actually right there on the front page, but you could also go to our shows page this weekcom/shows. health.com/shows. It'll have a description of each one of the channels.

This is one of our end of the year episodes. And then we also have a look at the Newsday conversations that we've had with this year's guests hosts. As you know, the Newsday different from today. Today is me just talking about the news. The Newsday shows me and other people having a conversation around the news.

So we're going to cover those in a compilation. And then finally you're going to meet the team. So I'm going to have my team, this weekinhealthit team come on the show and share their favorite moments from the interviews that we've conducted this year. This is going to be fun to get their perspective.

And we just had logistics challenges. A lot of those kinds of things. Let me run through some of the headlines we had here. The second story of the year that we covered was rolling out the vaccine and how much of a huge challenge it was going to be. Some of the tools did not exist from a scheduling standpoint.

So there's a lot of challenges. Whenever you try to build those kinds of partnerships, it is very difficult to to pull off because you have conflicting cultures and potential outcomes and those kinds of things that are the expectations of the actual partnership. So that that came to an end. Healthcare made some of those normal comments that we make. You know, this, this shows how hard healthcare is.

So for instance, this year I bought a whoop and I'm wearing the whoop. And I really like it. I'm getting a lot of really interesting information on my sleep and my recovery and those kinds of things, but it would be interesting if I had my information that I could provide to them and they could start to develop services in addition to the health that they're providing me right now.

So the Atrium event, they were able to drive onto the track, go into pit row, get their vaccine, drive the rest of the track and then out. And that's the kind of stuff I thought was really well thought out from a you know, vaccine standpoint from an efficiency standpoint and from getting people on the right track.

I thought it was really well done. It was done more from an education standpoint. And I think that is the tack.

The only people who got into the event were those who tested negative for COVID. And because it was the state of Massachusetts, there were state laws in effect around wearing masks.

So a lot of people that lowered the masks had conversations and then went on. But as you walked around and moved from place to place, you put your mask on out of respect to other people and to abide by the state regulations that were going on. A number of people at that event was roughly 4,000 people on site.

So if a physician says, Hey, our next visit will be via telehealth as a follow-up visit or whatever. That is one of the biggest indicators of if they will do a telehealth visit. And so if your physicians aren't saying, Hey, let's do telehealth. That is going to drive it. Let's see, also in February.

And then the Biden administration came in and it appeared like they were not going to enforce anything. Which is the same thing as saying, you know, don't worry about this law. It doesn't really matter. And then a little later after things sort of settled down, they reaffirmed the goals of price transparency.

And we highlighted one or two of those apps on the show And I think that's going to be pretty interesting. We also highlighted the fact that the rule was a little convoluted. It wasn't real clear on where you should put the information in what format was somewhat defined, but not well enough defined.

You did have some changes in priorities throughout the year. The pandemic had a way of doing that. You know, you're running down the road in one direction something happened and you had to pivot, took your focus off of let's say building clinics. And so their clinic plans are moving slower while they were focused on other things.

IBM Watson is going to be one of those cases that gets talked about forever in healthcare. They came in loud and proud into healthcare, and they chose a extremely hard pressed set of problems to try to solve. I mean, they went after oncology, they went after diagnoses and they essentially said, look you know, Watson is going to go out and read all the medical journals.

And this continues to be one of those things to keep an eye on. So they launched into all 50 states, where are they going to go to next? Well, they're going to go to start signing other employers onto their programs. They expand to 50 states for their own employees. Then they sign the company that owns Peloton.

And again, I like it and I like it because Glen has a way of seeing the the experience and the economics and the partnerships that are required to address the problem. And when he looks at the triangle of those things what he looked at and said, look, employers are getting more and more frustrated.

Let's see information blocking became a big conversation that you know, what is the actual rule?

Maybe a little different tack and approach. Mickey is very collaborative. He is very he wants to hear from you. He wants to ensure that everyone understands what is the intention. And he also comes from Massachusetts where they are doing the HIE and interoperability extremely well.

And so again, the news stories started to correct themselves as they went on. We talked about patient centered interoperability. Since I've already talked about that, I will go on from there.

All right. So cybersecurity again is top of mind is something we need to talk about. Scripps goes down. Here's the thing. We don't know a ton about this there. I mean, it's not that they weren't forthcoming it's that you know, maybe they weren't able to talk about some of these things, but here are the details we do have, the EHR was down for probably close to about 30 days.

Then we did a recap, the CHIME summer forum. We took a look at the response from Chris van Gorder who's the CEO of Scripps and just some awful lot happening from that perspective. All right. So then we go, where are we at? We're almost in July.

And the reason it's an important movement is because Dollar General tends to serve the underserved areas. And Walmart also made this case as well, that they are in a lot of underserved areas and they are a good conduit to to a population that doesn't necessarily have access to great healthcare.

We saw the move to the home. Obviously we had an announcement from Mayo and Kaiser in support of medically home towards the middle to end of this year. We had a bunch of telehealth stories that talked about different ways that they were delivering care and care venues. We also did stories about the pushback on the medical licensure around telehealth.

We did that a couple of times this year to see what was going on and see how we were progressing. It seems like we've sort of stagnated around the 60%. Each state's a little different I think based on the demographics and the culture of those states. State I'm in Florida is at 60% California where we visited with 62%.

A lot of really good interviews. We talked to Mike McNamara with Impact Health. They conducted all the testing. They have a group they essentially have nurses, they have a pool of nurses that they could call from. They pull them in, they establish the process for testing and they could stand that up.

How are we gonna address the labor shortage and how are we going to hire the best people? That brings us about up to date. I sort of flew through the second half of the year, but that gives you an idea of just some of the great conversations that we had this year. Some of the stories that we covered.

The incomparable Sue Schade has been on several times. Mari Savickis was on. Dr. Q. Dr. Quinones has been on a couple of times as well. We had the Sirius people who had come on just phenomenal conversations. Karl West, and I dissected the Sky Lakes ransomware event. That was really good.

He's actually the president of the Mayo clinic platform. Cletis Earl came on as well. Now at Penn state health. Love having him on the show. Two guests, I always want to call out Rob DeMichiei former CFO for UPFC is always great. He really educates me on the financial outlook. I tell him what I see at the JP Morgan conference.

So Tausight's coming onto the scenes. Some new product coming out, very interesting. Paula Edwards and Angelique Russell, back to back episodes. Great data episodes. If you're looking for great data episodes Dr. Paula Edwards is phenomenal around governance, analytics, human centered design. And then we had Angelique Russell who's really practical on the clinical data models.

Michelle Stansbury with chief digital at Houston Methodist also came on. Another great conversation. And I also have to thank Charles Boicey who came on from Clearsense. CTO from Clearsense and we continued our series of CIO to CTO conversations. I remember sitting down with a CTO in my office.

And we always appreciate your feedback. Send it to bill@thisweekinhealthit.com. I read them all. 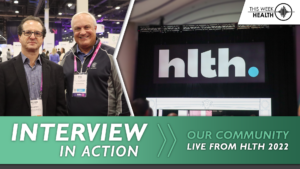 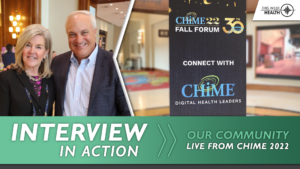