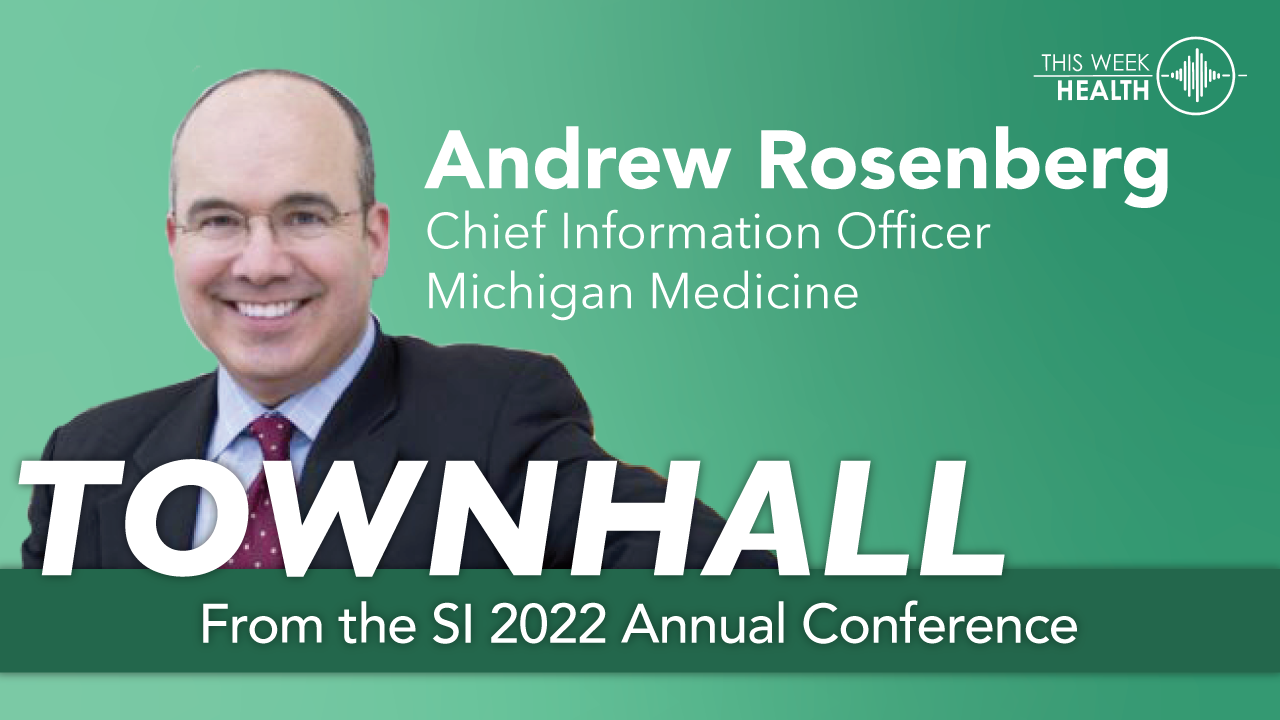 May 19: Andrew Rosenberg MD, CIO at Michigan Medicine shares his vision of the future of healthcare technology. What innovations can we work on now that are going to have the most impact in 10 years time? Hope you enjoy.

Today on This Week Health.

I think a lot of us are having a lot of conversations about what do new cloud methods and techniques really mean? Those methods are changing. New types of governance, new skills that our staff need to do that kind of work. So the real question though, is not just that we're moving more and working more in the cloud, but where do we really think we're going to be 10 years from now?

Today on TownHall. We had the honor of being invited to the Scottsdale Institute conference in Arizona. And while we were there amongst so many great health IT leaders, we were able to capture a couple of conversations about their thoughts and work in the industry. And we thought we would share them with you on this channel. So here's another one of those interviews from the Scottsdale Institute.

Alright, here we are from the Scottsdale Institute and we're joined by Andrew Rosenberg with Michigan Medicine. Andrew, welcome back. I feel like if we just saw it,

It's nice to start getting back into meetings. Isn't it.

So since I did the last interview, why don't you what's your question for me this morning to kick us off? Like, like I did that making me do my job.

Okay. I think, I think the question that's a little bit fun to think about now is what's likely to be impactful 10 years. we we spend our times, day to day, we spend our time focusing on operational work makes a lot of sense, but one of the things is to step back and what's really going to be impactful that we want to start to look toward and work toward 10 years from now.

This is going to get me in trouble, but yesterday we did an exercise and I was sitting at a table and we were talking specifically about. Workforce, right. and I listened to those answers and they're great answers. They're creative answers and those kind of things, but they're the same answers we had 10 years ago, practice at the top of their license physician assistants and all those other things.

That's why I like this question of what's 10 years from now, are we getting enough time where we actually step back and have that conversation? Then we actually look at those things we're saying, okay, What's different. What's possible. What, what are the new things that are happening that maybe we do things a little different than we've done them before?

Well, I think we've generally tried to answer that question. I think, especially in technology where things are moving so quickly, one would be understandable if they said, ah, that's just not really pragmatic and practical Yeah, things will change so much between now and 10 years really kind of what's the point at the same time?

I think that's part of why we go to these meetings to try to think about not just where things going to potentially be in 10 years, but what are we doing now specifically, very pragmatically in order to get there? I think a lot of us are having a lot of conversations about what do new cloud methods and techniques really mean?

Because most of us are in the cloud. But we're moving to, when I say in the cloud, I really mean we're working with the methods that are cloud-based and those methods are changing new types of governance, new skills that our staff need to do that kind of work. So the real question though, is not just that we're moving more and working more in the cloud, but where do we really think we're going to be 10 years from now?

It was the infrastructure that we needed to get us to be able to do the types of EHR and other health. It implementations. But now the irony is how we're going to get out of that. What does that mean? Where's the flexibility? Where do we take customization? Where do we, not things like that.

Y out of the days, is it, are we out of the days? Which by the way, I agree with you. But why do the data center now? Is it because is it an acknowledgement that our, our work is now not geography bound and we can be in the cloud? Or is it because we have to reach so many points that aren't specific to that building in. That we, we really need a lot of computing and a lot of processing and a lot of communication outside the four walls of our system.

I think there, there are a lot of answers. I think you've, you've hit on a few that probably are there. I would pick another one. I would say the methods of the cloud are more amenable to the type of speed and choices that we need now and we'll need It's probably the speed and I radically, I think healthcare doesn't actually require as much speed as some other industries might speed to change speed, to change speed, to keep up with requests.

It, I think that's part of it also. I mean, our path, our evolution has been implement large EHR. Okay, implement all the associated work around it, increase our digital footprint, move to more mobile devices, start adding more IOT. The amount of data that comes from everything I just said in and of itself is its own ecosystem has its own gravity.

All of those require new techniques, new methods, as I've said before, flexibility. And I think the cloud methods offer that there's also a certain inevitability to it. We're just seeing more and more SAS coming our way regardless

we'd be at a conversation with Judy this morning. It's great. Judy was here at like six o'clock in the morning, responding to emails, which is what she does. And the conversation we had was what does epic look like a hundred years from now? What is the role of a CIO in facilitating that conversation? Okay. And bringing I don't know, the, just the thoughts of technology and the thoughts of digital enablement and those kinds of things to those conversations to your system.

I see the logic there, but the devil's in the details then around what can you actually do and get done at the end of the day, the chief innovation officer, especially when it comes to technology. Needs the resources that the CIO typically has been managing in order to move those. Right. And of course, I think in the ideal world, you don't necessarily have to own and be a hundred percent accountable in order to shift an institution.

We've all had that experience where we still help make changes in institutions, even though we're not directly owning it at the same time. I do think that it might be philosophic. Is some of the work that we're doing in order to achieve the innovation, the, the disruption, the changes that we need.

And I think it probably comes more down to the individual and not the role of the CIO. What are you like as a person? Are you more comfortable with just day to day operations and doing them very well? Are you the type of person who's always looking to do things in a new way? Part of the new ways in it or the new ways across the business.

And then where does your eye, I think it's more your personality and the role come together, not just the role itself. The role of the CIO is as much related to who the individual is. I happen to be someone because of my background in clinical and education and research. I think I have a reasonable enough sense of what's needed.

And then of course, working with those other businesses. Have a sense of where they want to go or occasionally where they should go.

Well, I would say if there was one single change and of course they're going to be. It is the decrease of the autonomy and the variability that occurs from that autonomy, that physicians in particular and a little bit less. So other providers have had in healthcare.

We reduce clinical variation has proven to be valuable, but if you reduce that choice, the physicians I've talked to who talk about it as the heart of practicing medicine. Right. That sort of becomes more of a challenge for them.

Yeah. We've talked about the other night I was bringing up one of the challenges, especially with technology and health is that we tend to, to bring examples from other industries, but most of those industries are based on a product or a service that is engineered and computable. It's a thing that's been built.

precision And therefore it needs individuals, doctors, nurses, and others who can interpret patient wishes, who can sometimes impute a range of options. And that's why, for example, you don't talk to patients and use a lot of medical jargon. You confuse them at the same time. You can't be so simple that you don't give them enough details to help them make choices, trying to digitize that is wrong and folly. it goes against, I think what it means to be a human. So I think there's, there's going to be less variability, but ideally there will be even more than attention to humanity. Interpersonal relations. We talk a lot about patient engagement. Now we never talked about patient engagement during my.

So while I talk about more adoption of technology, we also are adopting more of the humanity than we ever did before. So I'm not worried about losing the art, if anything, I think we're actually emphasizing both reduced bad variability and enhanced attention to the person wellness of the individual wellness of the providers, all of these are getting more attention now than they ever did before.

Andrew, thank you for your time.

Oh my pleasure. Thank you.

I love this show. I love hearing from people on the front lines. I love hearing from these leaders and we want to thank our hosts who continue to support the community by developing this great content. We also want to thank our show sponsors Olive, Rubrik, Trellix, Hillrom, Medigate and F5 in partnership with Sirius Healthcare for investing in our mission to develop the next generation of health leaders. If you want to support the show, let someone know about our shows. They all start with This Week Health and you can find them wherever you listen to podcasts. Keynote, TownHall, ???? Newsroom and Academy. Check them out today. And thanks for listening. That's all for now.