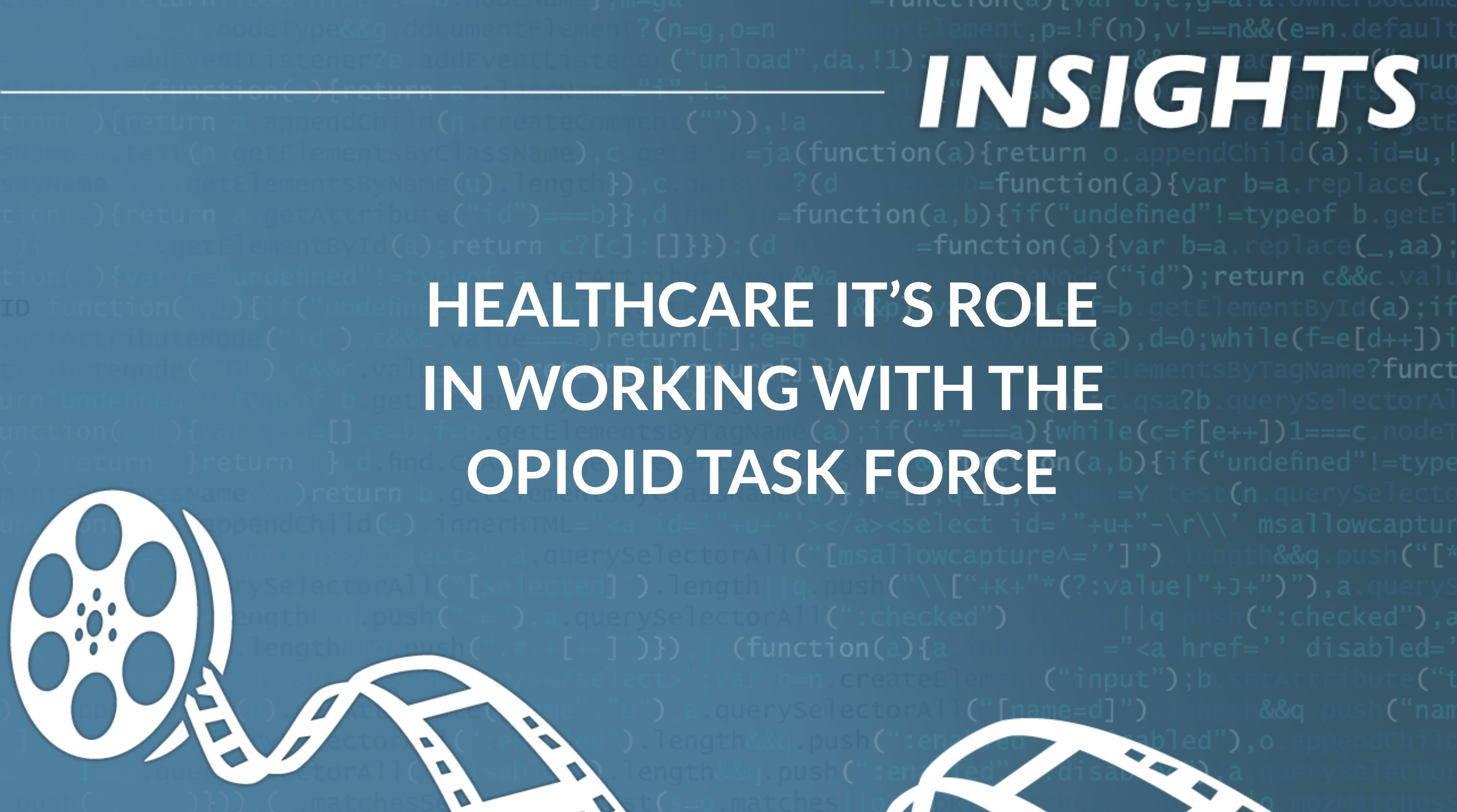 Today on Insights. We go back to a conversation Host Bill Russell had with Matthew Sullivan, Chief Medical Information Officer at Atrium Health, Sean Kelly, Chief Medical Officer at Imprivata and Scott Weiner, Emergency Physician at Brigham. The topic of discussion was The Role of Health IT in Combating the Opioid Crisis. And Bill asks what accomplishments the Opioid Task Force has seen so far, in combatting this every growing issue in society?

Today on insights. We go back to a conversation host Bill Russell had with Matthew Sullivan, Chief Medical Information Officer at Atrium Health. Sean Kelly, CMO at Imprivata and Scott Weiner, Emergency Physician at Brigham. The topic of discussion was the role of health IT in combating the opioid crisis. And Bill asks what accomplishments The Opioid Taskforce has seen so far in combating this ever-growing issue in society today.

We're going to go down into that technology stuff, but you know, one of the things I want to talk about just briefly. Under Russ's leadership CHIME has had a more significant role in Washington. And I really appreciate that. I'm wondering if the task force has been able to help move things forward in Washington with regard to policy I dunno, who wants to take that question?

I can give a little color on a couple of policy issues that I think were particularly important and maybe Scott can do a little bit of a embellishment too. But I think that a couple of technology specifically have great relevance to the IT. One is EPCS or electronic prescribing of controlled substances.

And I think this is a good topic to consider when you really, as clinicians, we need to own up to the fact that prescription drugs were a big part of this problem. And we all know a lot of the history. Behind pharma and clinicians, and even things like the culture that we grew up in with the joint commission and others treating pain as a vital sign.

And if you're not treating pain down to zero, you're not doing anyone any favors and actually giving too many of these prescription medications to patients that ended up creating people that were addicted, that fed into this cycle. There's a long history there. I don't want to go too much into that, but from an IT perspective, shedding light on all of this process and creating an electronic prescribing system that is transparent and accountable, efficient audible, but again needs to be a good technology because you can't put expensive onerous technology that blocks clinicians from doing their job.

You need a good technology that actually does all those things from a regulatory and auditing standpoint and prevents misbehavior by a certain minority of clinicians, but something like ECPS and influencing that in the right way with those advocates on the hill. But even more importantly at the state level to say, look, we need good technology.

It can't be too expensive and it can't be too onerous, but it needs to be there. And we need to modernize the way that we prescribed. Another case would be PDM PEs or the prescription drug monitoring programs, where we actually can have visibility as frontline clinicians and others to who's actually been getting prescription medications and where have they gotten them. And lack of interoperability there has been a blocker in the past. We're getting over some of those humps, but you know, the fight is not over there as far as standardizing and working on those systems. But that's right to the heart of what IT can do is to make these systems easier and readily available to the practicing clinicians.

And that really takes cooperation between the providers, the legislative bodies, the monitoring, and auditing bodies and the vendors involved like EHR and other vendors. IM management and VPCS, so I'll turn it back to Scott and Matt and others for comment. But I just want to highlight a couple areas where advocacy lined up with the practicality of the frontline tools.

Now just partly under the PDMP. I was going to use that example as well, too, which has been, my mind has been a resounding success. We used to fly blind. People would come into the ED, wouldn't know if they had just literally gone across the street to, to Sean's hospital or my hospital with what prescriptions they had.

It was really important at the beginning when there, there was a lot of, it's a derogatory term now that the Doctor shopping which I think has really been curved by the existence of PDMP. So patients know that they if they go from hospital to hospital there, their physician or prescriber does know that they've gotten these other prescriptions and I think that's empowering all around. Some patients say like, don't you have a database where you can see my medications now. And clinicians also feel protected. One step we took further was that we integrated with one click integration of the PDMP in our EHR. And it's fantastic.

I just push a button. Five seconds I get the result. It automatically queries the 4 closest states as well which is awesome. And we found that by just by doing that, we increased the number of searches by 43%. And it's like one of these awesome clinicians would love it because you don't have to log into a website, you just push a button and you get it. So that's just a really nice example of how IT can make our lives easier.

It would be very fascinating to have a debate with Scott and I. I think I'm on the other side of the spectrum in that I think that the PDMP has been somewhat helpful, but I operate and practice in a different environment where I literally live on the border between two very large geographic by states. And Scott has a lot of states around New England where he has to really look and, and find those. We don't see people driving to Alabama from North Carolina to doctor shop.

So it's a little less complex, but. We also have been plagued a little bit with the ability of the state to manage the PDMP and each state does it a little differently. And as we've seen that maturation grow, it's really time to think about what are we doing from a national perspective so that we don't have to negotiate with each one of the states.

And again, at Atrium Health being large geographic across the four states you have to figure out all the rules are different in each state and all the access points are different in each state. And so that one click interoperability the physicians think it's just automatic. Right. But in the reality of the, behind the scenes is that there are a couple of people, like us that are trying to wire all of it up to make it actually work well.

And sometimes it takes a little bit more effort than just sort of poof. So I'm a huge proponent of having the data. I'm a pretty seasoned ED doc. And occasionally it was fairly obvious who was looking for medications. And for the most part, I think given the other recommendations that we've rolled out as far as limited supply and partnership with our surgical colleagues, not to be handing out months worth of opioids after a surgery, there's lots of great things we've done in medicine that actually has eliminated my need to even see the PDMP. And so then it becomes a question of, is this a mandate that we don't need any more.