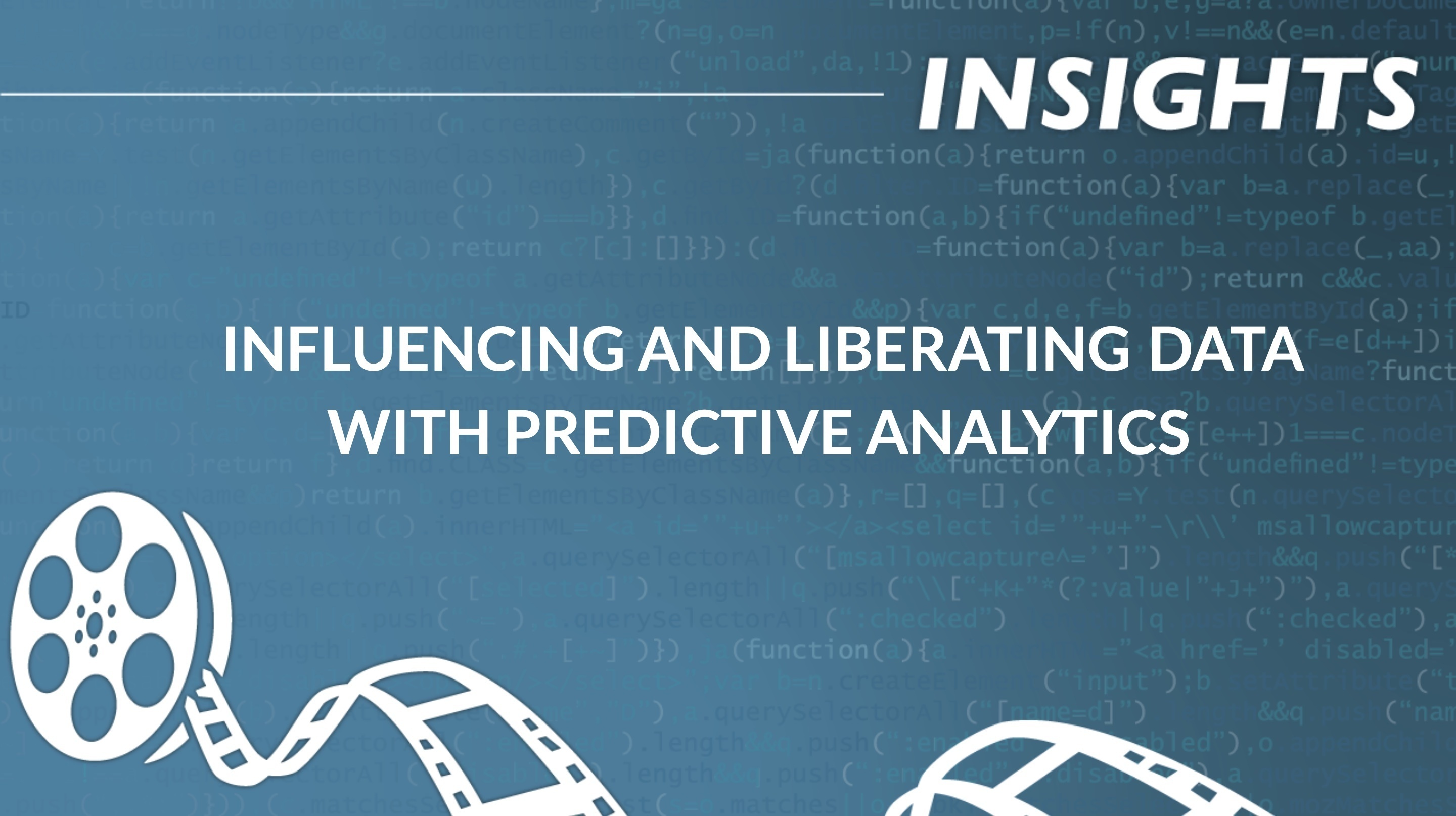 Today on Insights. We go back to a conversation Host Bill Russell had with Nassar Nizami, Executive VP and CIO at Jefferson Health. The topic of discussion was The Liberation of Data in Healthcare. And Nassar deep dives into how predictive analytics will change the patient care landscape in a huge and meaningful way.

Today on insights. We go back to a conversation host Bill Russell had with Nassar Nizami Executive VP and CIO for Jefferson health. The topic of discussion was the liberation of data in healthcare and Nassar deep dives into how predictive analytics will change the patient care landscape in a huge and meaningful way.

I really believe that we have an opportunity to influence patient care in a meaningful wa y with predictive analytics. I'll share an example with you. We at Jefferson, we have an OPI fast force, as this is a national issue. Our Dean developed a scorecard, which we call a provider scorecard. In the insights from this scorecard, lacked the changes in provider workflow that resulted in 91% drop in prescribing beyond three days. Our team has presented this work at national forums.

We recently demonstrated it at the Philadelphia health commissioner's office. There are a number of other use cases that we have worked on successfully and working on. For instance, we are working on predicting sepsis.

Another example. There is a lot of buzz around AI, machine learning and predictive analytics, and I believe, at least in the short focus on point solutions where it will give organization like ours, most value. This is your seeing, and this is where I'm really excited.

Yeah, absolutely. I mean, that's really exciting in terms of how data can really transform things like the opioid epidemic and really addressing it head-on. We've been doing things like readmissions for years and those kinds of things, but now we're getting very focused on things that are going to impact the community, things that are going to impact quality outcomes. It's really exciting.

The hard thing is there's so many areas to really focus in on predictive analytics, that it's hard to have enough staff and enough bandwidth to really do all the things that you want to do. That's been my experience in analytics. You really could quadruple the size of your team and be doing phenomenal things.

So does the data have the ability to change healthcare as it has in just about every other industry? Or are we going to see some barriers?

There's a lot of good work being done in the name of interoperability, which needs to continue. Right. And I absolutely believe to your point that data in the hands of researchers and developers and entrepreneurs will truly change the way we provide healthcare. There is a ton of data in EMRs and other clinical system, which is not used.

Overwhelming majority of it, it just sits there for legal or compliance or historical reasons. And this is the data that the research community can do wonders. You asked about barriers. So yes, there are barriers. First we have to think through privacy implication. For instance, companies like apple are not coded by HIPAA.

Right. And there is a level of expectation from consumers, patients by the safety for the last 20 years, we have told everyone that your patient information is covered by HIPAA and so forth. These third parties don't have those productions, I guess. Right. So we have to just think through. It doesn't mean that it should not be open.

I'm all for opening. It's just that we have to think about implications of making sure that patient data is state protected. There are real technical barriers to interoperability and openness. And as an industry, we have been trying to solve those for many years. And there have been many successes.

Also there are a lot of lessons learned and then there are going to be more lessons learned. I think the time is right. We need some push from our policymakers. We need engagement from organizations like Google and Microsoft who have the resources to make things happen.

And researchers will do their job and good things would come similar to app economy that we saw in the last decade.

Absolutely. So one of the primary principles of blue button 2.0 is to get the patient record in the hands of the consumer. So it completely frees it. Gets it on the phone.

Once it gets on the phone, then as you pointed out, there's no HIPAA security on Apple. And part of the reason for that is Apple is, essentially the consumer's giving it to Apple. And they're not really putting that requirement on Apple yet. I think we'll see that sort of emerge here, given the the landscape that's going on, but we put the record in the hands of the patient.

Do you think that's going to open up, I don't know what I've talked about this a lot on the show. I've talked about. Once we get the record in the hands of the. That we're going to see all sorts of new paradigms start to, to emerge in that the is going to be able to decide to sell their data.

It's not going to be something that a health system decides to do, or our claims data that gets sold and new industries gets created, but there's going to be the ability for me, the patient to go I want to participate in this cancer study. I want to participate in this heart study and potentially get compensated for it. Here's five bucks for this or 10 bucks for that. So we'll create a sort of a data economy there. Plus we'll create all sorts of new really access changes. As I go from health system to health system, or I move from place to place, or I decide to use tele-health from a different provider, I'm going to be able to provide them my record instead of them having to re request the record from another health system.

Let's start here. Do you think the patient should own the medical record? Do you think we should put it on every phone? You're a former security guy, so you know what that means? And then do you think that's gonna enable more or different kinds of ways of delivering health to that population. And is that going to really impact the health systems today?

First of all, absolutely patient owns data and up until now, they just didn't have a way to access it. And other than, getting a printed copy of their medical record and in some cases going to a vet portal and trying to figure out what's happening.

I mean, so the fees that we provide our patient data as is inefficient and inadequate. And there are so many ways where we can easily a patient can easily say, Hey physician, this is my record from a hospital. This is my x-ray or lab results and so forth. So that's going to be very powerful and I think absolutely patient owns the data.

And we need to make sure that the chance for data from patient to whoever the patient is seeing that as a hospital or a physician is very easy. It's very quick. And it happens in a timely fashion. That is an absolute must. I think that what I'm concerned about is the lack of understanding with the security.

So, you see in the news, what's happening with Facebook and Google and GDPR, especially in Europe and just the realization by people that their non-health data, the social media data can be use in ways that nobody imagined. Right. And can be minds in ways that nobody ever imagine. And I think that's an educator. There's an educational component first and foremost, to educate the patient that what can they expect once they share the data because Apple or Facebook, they are known to share their data with third parties I believe that Apple already have in their t erms and conditions where they, they can share the data with third-party. So before a patient knows the data is going to be not only with companies like Apple or Google, but all the ecosystem that the support and I think first and foremost as an educational thing.

The patient has to realize what they're sharing. And secondly, I think you will see some more rules and regulations around them. I'm not sure about the monetization piece because for most companies, the benefit of the data is, is from scale. Millions of datasets that I think foreseeable future is still or larger organizations will manage. But that does not mean that I assume really that the given data to patient is very powerful. There may be organizations that are interested in a very niche study.

So you mentioned cancerous if I'm organization and my interest in lung cancer I don't need hundreds of thousands perhaps. And contacting a very special population and target the population could probably help an independent or company who don't today have the means or have to spend a ton of money to gather that data.