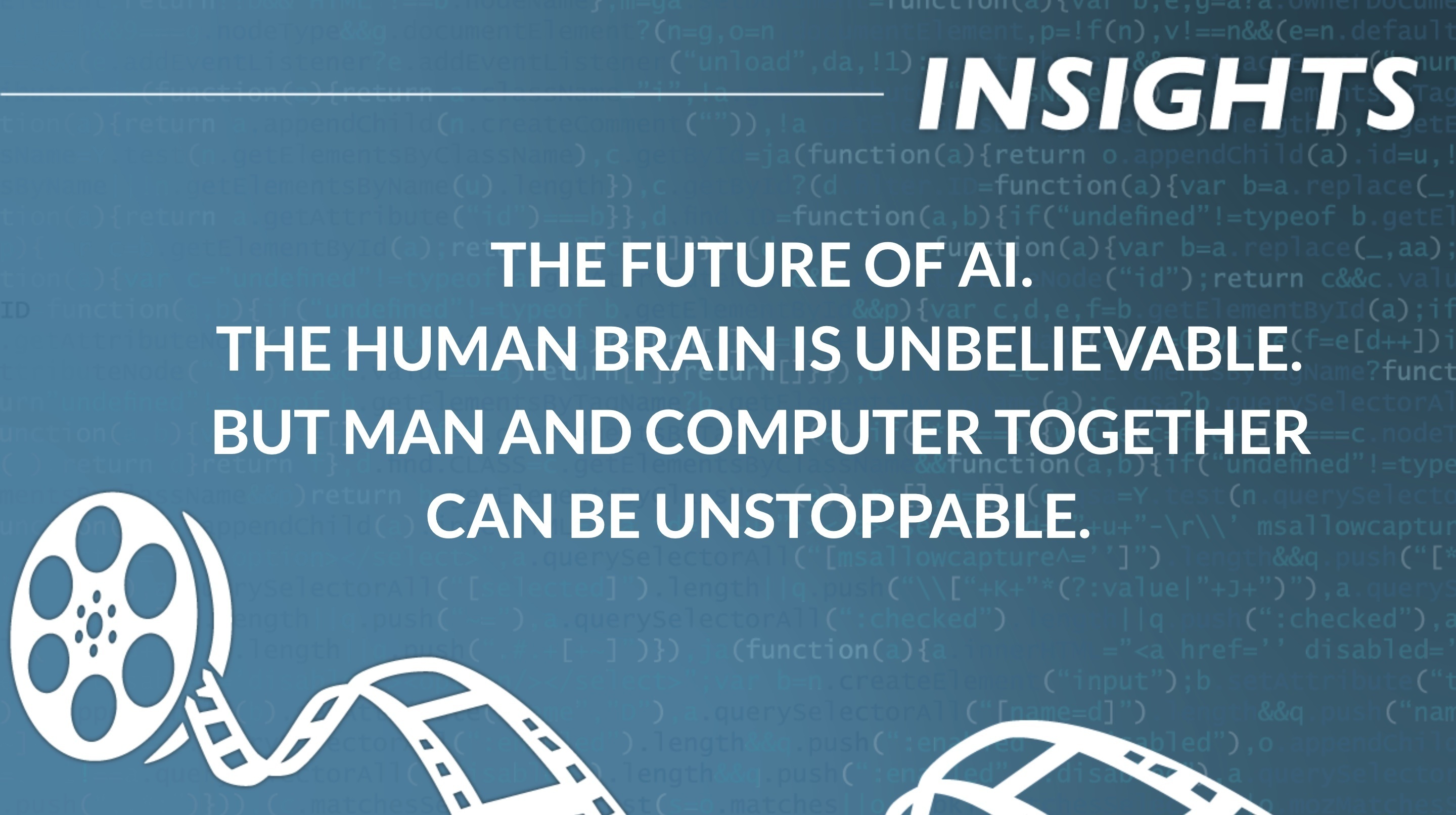 oday on Insights. We go back to a conversation Host Bill Russell had with Dr. Anthony Chang, Founder of AIMed. The topic of discussion was The Future of AI. The human brain is unbelievable. But man and computer together can be unstoppable.

Today on insights. We go back to a conversation. Host Bill Russell had with Dr. Anthony Chang, founder of AIMed. The topic of discussion was the future of AI. The human brain is unbelievable, but man and computer together can be unstoppable.

The number one takeaway for me after learning for four years in school is just how amazing and how cheap the human brain is.

The things we're trying to get computers to figure out and to learn, which is an amazing thing in and of itself, an infant is doing. They're crawling around. And so we really are still at the beginning stage of this.

Right. There is just some really interesting analogies. One is, when man wanted to fly, it looked at birds and in the Greek times the people even got dressed like birds thinking that that's all you need to fly.

And in fact, we need to understand aerodynamics and then build machines that are now flying much higher, much faster than birds. And I think I see that for AI. So AI right now and I disagree that people say all the time, computers are fast and stupid and humans are slow, but smart. I think we are getting to a middle ground where we both can contribute to overall intelligence. And one of the things I said at a recent interview is that artificial intelligence plus clinician intelligence equals something new and special medical intelligence, because wouldn't you want a man and a computer combined to take care of you in the future?

Absolutely. Because the computer can process every new England journal of medicine. Right. And have that readily available.

6 million pages in a second.

Yeah. It's unbelievable. So you know virtual reality is coming out. Augmented reality is coming out of the hype cycle. It looks like the autonomous vehicles is actually also coming over the curve. But all these other things are just on the other side. So we have huge promise. I mean, usually, what that says is we can see the promise, but we just can't get it yet.

Right. And I think this is a wonderful graphic that you have just before showing you saw the evolution of AI with the last few decades and then the future. So RPA, which is making a comeback, ironically has been around for a long time. We just haven't really, we've sort of been reawakened to the potential of RPA. And something about AI that's good to remember is, don't go for the moonshot project with millions of dollars. In fact the biggest and the fastest ROI could be the mundane project that little RPA can take care of in your revenue cycle or in your decision-making process.

Absolutely. At the JP Morgan conference, Tony Tersigni CEO for Ascension got up there and started talking about RPA and how they applied it to their call center and saved millions of dollars.

In fact, what was interesting to me is he said, not only are we taking this service that we now done to other health systems, we're actually doing it for organizations outside of healthcare because they have done such a good job with it. So it actually, when people say to me where I should start with AI, we're getting ahead of ourselves, but where I should start with AI, I rarely point them in the clinical direction.

I almost always point them in claims processing, fraud, detection, security. There's so many areas you can point at it that it's not life and death yet. Right. Not that you shouldn't be looking at those other cases and we'll, we'll get into those, but there are a lot of places that improve the cost of healthcare, improve access.

Yeah. It's sorta like multi-dimensional, so if you think of artificial intelligence as a orchestra. Right now, machine learning deep learning is getting a lot of attention. So I sort of equate that to the string section. And obviously there are many sections of the orchestra. So someday soon hospitals, healthcare organizations going to be able to have amazing music with all the sections playing in the wonderful symphony and also together. Cause right now there's a lot of cacophony. Everyone's doing their own thing. You can have in the same hospital, perhaps the management is doing a little RPA and not know that their clinical data science team is working on the septic sepsis prediction model. And yet it's all under the umbrella of artificial intelligence.

We were using AI and I didn't really categorize it as AI, which kind of surprised me. I was wondering if you could just sort of walk us through in terms of where is it in practice today and where should we be thinking about it?

AI is really up to our imagination in terms of what the return is going to be. I don't think anyone can just tell you right now the return is but I think for instance, I think the area of cybersecurity could be much bigger. Because I think as we learn about data protection and cybersecurity, there's a lot of instances where we need to have that, especially if we're going to share data so that I think that's underrated.

And if I could drive that one home. We had implemented a lot of tools and each one of those generates log files. The log files got so massive. I couldn't build a big enough team to go through those log files. We had the ability to essentially a big data store and then the ability for computers to identify anomalies and pull those out.

So if you can see that exponential curve, there's plenty of work for everybody. Man and machine combined. So I think that's going to be a growing area as well. And then the future areas, RPA will be really big in terms of helping with the administrative burden, as well as I think the eventual sort of AI promised land is going to be using cognitive architecture on top of deep learning so that you have something I call deep thinking, which is deep thinking or deep cognition is going to be what medicine's going to need because medicine and healthcare is much more complicated than a simple game.

So what should I be telling my healthcare leader? What should I be telling my radio? So computer vision now can read these images. The other thing I heard about, is that the computer can look for a hundred thousand things. Whereas usually the radiologists is looking for one specific thing or whatever. And so even having a computer go back and look at all these images could identify some things that weren't found.

Well we could reassure the radiologist is that you actually need both man and machine to have the best results. And I think the machine can help the radiologist by relieving the burden of particularly the normal studies.

So it really is moving them up to practice at the top of their license.

We did an interesting audience survey and the question was, who would you trust with interpreting your cat scan? And the choices were radiologists alone, machine alone, radiologists and machine. It was 85, 90% wanted both parties to be reading the CT.

Give us some clinical examples. You're pediatrics. So where's AI being utilized in pediatrics today?.

Well, there's some exciting areas. One is real time analytics in the pediatric cardiac intensive care unit, which is my domain previously. So we could look at take all the vital signs from the pediatric patient after, before, after heart surgery, particularly during the unstable periods.

And we can actually forewarn clinician what the the composite is telling us in terms of impending deterioration or cardiac arrest. So obviously the key to successful patient care is to avoidance of cardiac arrest. And that's a very useful too. And if you combine that with other information like in the electronic records and lab values, that's going to be immensely useful in the future as well. So that's just one snapshot example of how that can be used.

I made you CEO of a health system. Where were the first couple of places you'd be looking at it? What would you be doing with your team to maybe bring them up to speed on what's going on? Those kind of things?

Well, actually in the process of coming up with AI score for a healthcare organization, because that's a great question. Like where do you spend the money to get not necessarily the best return, but the best value.

Right. And I think ironically I try not to look at AI projects because I think the, one of the major areas of deficiency as we think about AI projects is actually the quality and the management of the data. Right. And I think you remember, I said that before. So I think my first investment, it just like, if you look at the pyramid, the graphic showing the bottom being the data.

Yep. The next layer being information. On top of that is knowledge and then above knowledge is intelligence or wisdom. So I think in order to do good intelligence, you wouldn't want to do a lot of projects in intelligence and realize that the foundation data layer is actually problematic because that's going to topple.

So I would build a very strong foundation, make sure your data is very sound from the IT perspective. And then the AI part is actually quite straightforward. Get someone well-versed in the AI projects. I would focus on medical imaging and decision support, because those are now maturing as areas of AI in the healthcare domain.