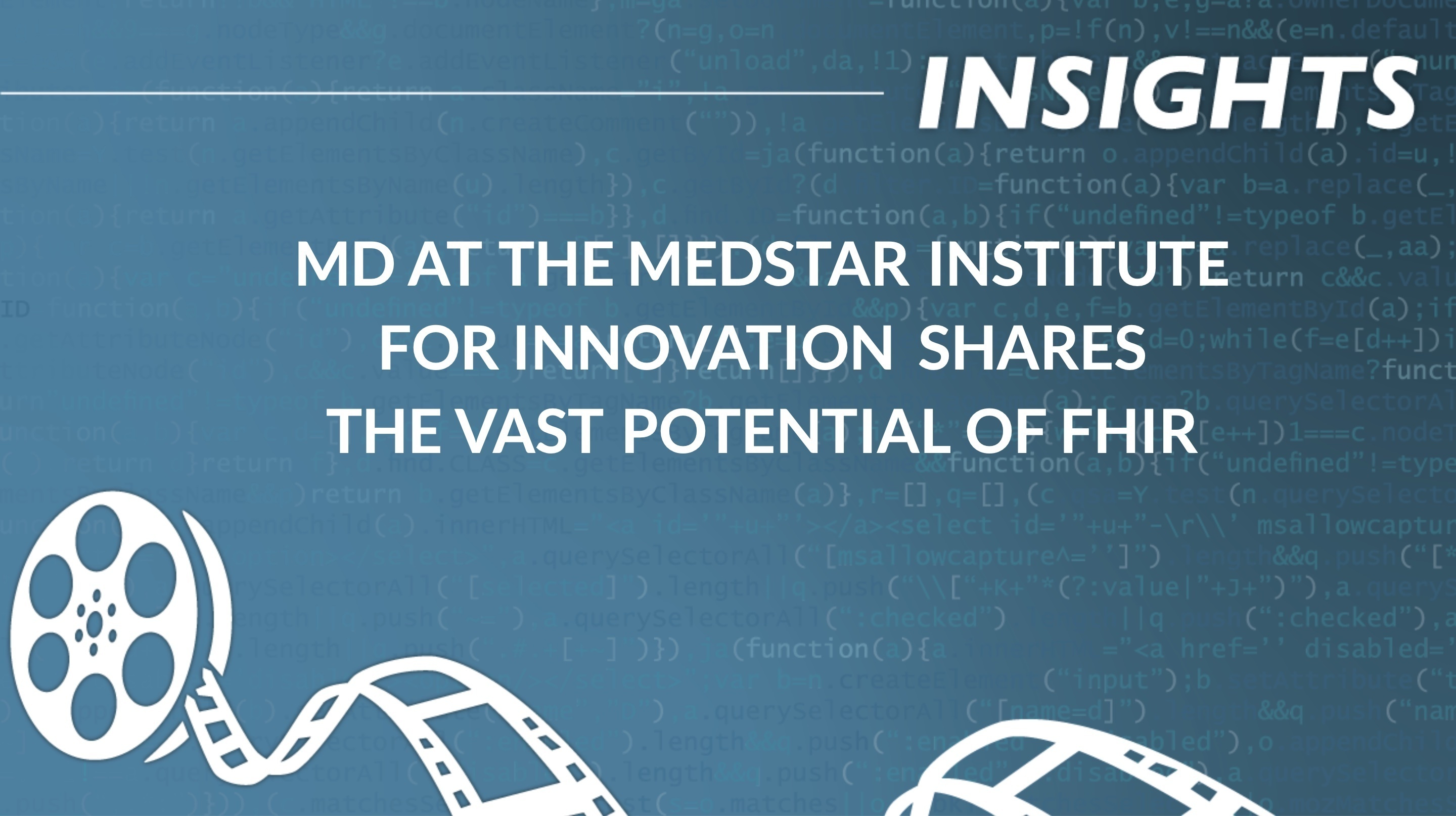 Today on Insights. We go back to a conversation Host Bill Russell had with Kevin Malloy, MD at the MedStar Institute for Innovation. The topic of discussion was Exploring the Potential of FHIR. And Bill asks Kevin for some examples of applications he’s written.

Today on insights. We go back to a conversation host Bill Russell had with Kevin Malloy, MD at the MedStar Institute for Innovation. The topic of discussion was exploring the potential of FHIR. And Bill asks Kevin for some examples of applications he's written.

So what are some examples of the applications that you've written and what are some problem sets that lend themselves well to FHIR where it's at today?

One thing, probably the starter and where we started with this was just installing like a inside of your environment, the basic growth chart app, which is like a provider facing app where providers in Cerner or Epic and they click a button and it opens up this FHIR app.

And you don't know you're using a FHIR app but it's code that's written by Boston Children's and it's free. And it pulls in the height and weight and makes us really nice graphical user interface for the doc to plot out the growth chart for the patient. And then there's like a, parent facing one.

So you could turn the screen around and they can look at it and they can print it out for the parents too. So a lot of people, start out, I think in, we did two just with the growth chart app and like an open source available app that you can plug into your EHR for providers. The other thing, people, I think probably then move on to some kind of single sign on stuff.

And the way FHIR works, it's actually Smart FHIR. There's a way to authenticate and then there's a way to get data out. And what you can do is use that authentication mechanism to embed something that you are here on to making providers go into like a browser window and enter their username password into and then pull it up over there.

So an example at Medstar was one of the really early things we did was embed our anti biogram which was this little website that was outside of her EHR. We embedded it within an EHR and you just click on and a button and it opens and you don't have to put a username password or anything like that.

Some other stuff we've moved on to is we're using FHIR for research grants. So there's a large human factors group at MedStar health that got a leap grant from the Office of the National Coordinator. And what we were able to do with them was to embed a risk calculator inside of the provider's workflow.

So in Cerner there's a little workflow thing you can scroll down and one of those you usually have like meds and conditions and like upcoming appointments, that type of thing. We're able to put a box there that was actually a FHIR app that calculated their cardiac risk score.

So you're using it a fair amount internally. You're the same, quite frankly, the same way we used to build access databases is what you made it just sound like. Not quite as insecure and not quite as messy in the backend, but almost as easy. It's sitting there going look, if you know how to access APIs and you now have to create a single sign on, you're going to have access to this data set, and then you can embed it wherever you need to embed it. And you can launch it on a mobile app or anywhere you need to launch it. That's what you're making it sound like. And again, you're educating me, so feel free to correct me.

No. No, absolutely. I don't know if you ever went to any training courses at like Epic, like I did physician builder and I went there and it struck me that there's this whole educational system built up around training and maintaining your EHR because it's so custom. The cool thing about FHIR is that it's all just regular web technology.

if you have a regular web developer, you can just point them at this spec that's online and they can go at it. They don't really need, they need maybe a little like bump of energy to get them over using it. I've taken people within an hour. I took one of the radiology people and now he's integrating FHIR data into PACS. He knows a bunch of web. so it's not I think one of the things that is unique about FHIR is its existing stuff that people already know how to do. It's not like I got to go and do something about NPH development or CCL development. It's just web development.