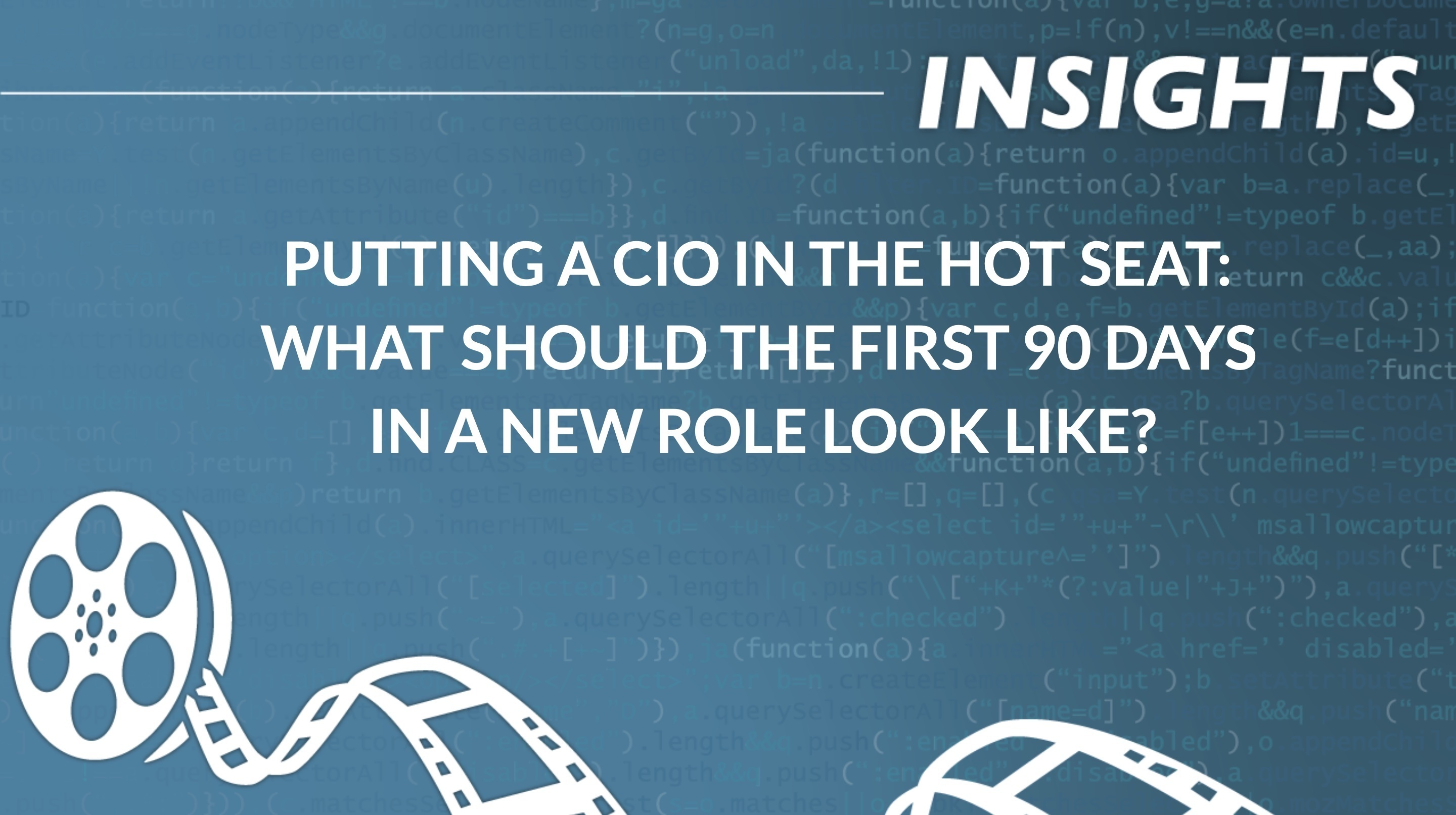 Today on Insights. We go back to when Host Bill Russell was in the interview seat and Dr. Mark Weisman was asking the questions. The topic of discussion was What Should the First 90 Days in a New CIO Role Look Like. And Mark asks Bill what does your boss and your new team want to see from you in the first 3 months?

Today on insights. We go back to when host Bill Russell was in the interview seat and Dr. Mark Weisman was asking the questions. The topic of discussion was what should the first 90 days in a new CIO role look like? And Mark asks Bill, what does your boss and your new team want to see from you in the first three months?

What's my first 90 days with my new boss. What should I be looking at? And when we stepped into this role,Theresa and I, we sat down with the CEO and COO and they laid out very clearly. This is what we want to see. Made it very easy for us. They're very explicit with that. I'm not sure everyone who steps into a new role, get that clarity.

Sometimes they're just like, don't go fix it kinda general like that. But sometimes you get that thrown at you. What questions or how do you approach that new boss of yours? If you're taking over this new team and getting at what's important to them for what they want to see from you?

Yeah. I'll tell you one of the interesting things with the CIO job I took in Southern California was a lot of the big name CEOs didn't want the job because it did not report into the CEO. It reported into the, I think the COO at that time, which changed, it was eventually the President, but I never reported into the CEO directly, but I knew that relationship was key and critical. And so what I asked of her was that we would get together on a monthly basis and that we would make sure that, that calendar invite never came off for whatever reason. And what's interesting is what started out as a, I really need clarity from you. I need to ask you a couple of questions, and also I needed to figure out how to navigate, going past my boss to do his boss and meeting with her directly. and so I just made that part of the, Hey, this is just what we're going to do.

It started off as a, Hey, help me to understand some things. And she did that really the whole time I was there. But the other thing it ended up being was I started sharing articles with her. Every time I went to see her, I had an article with me that explained cloud computing that explained APIs, that explained platforms that explained because you know what she knew.

She knew us even back then, she knew as the leader of a healthcare organization that she was going to have to be able to speak technology. She had to understand it, how it was going to be applied and how it was going to, and we're seeing a lot of CEOs start to make that leap. And that's part of my job.

You cannot succeed without clarity. You just can't do it. You can't even do that in your marriage for having to say, go talk to your wife. seriously, how do at least in baseball, When you go to the plate, what's expected, Get on base, put the ball in play. Don't strike out.

A alot of it depends on what you're inheriting. I had Daniel Barchi, CIO for New York Presbyterian on the show. And I asked him this specific question first 90 days. And in his response. He said healthcare IT is 80% people, 15% process, and only 5% technology we could argue about the percentages, but that's roughly, that's generally what it is.

It really is a leadership and a people job. And you have to really take the temperature of the, of the room. What's going on within your team. What's going on within your peers? How do your peers feel about IT and clinical informatics? Are we delivering? Are we giving them the tools they need to be successful? Or is it a critical thing? The last CIO job I took over the data center had gone down eight times in six weeks. In that case. they're looking at you saying, put out the fire. So you know, you really do have to take the temperature, but then there's some basic things that everybody should really take a look at.

I agree that particularly the culture where I'm at healthcare IT in general is risk adverse in my opinion. And we're no different, we're 120 year old hospital system. We don't turn on a dime. YEt the CEO and COO approach, Theresa and myself to make some things different because they wanted to see different results in a different culture.

And I'm sensitive to that, but I think the first 90 days will be interesting for us and for any new leader, because you got to feel out what's the what's what do your constituents want and what do your employees want? Because they may not be the same thing. And then how to start reconciling that.