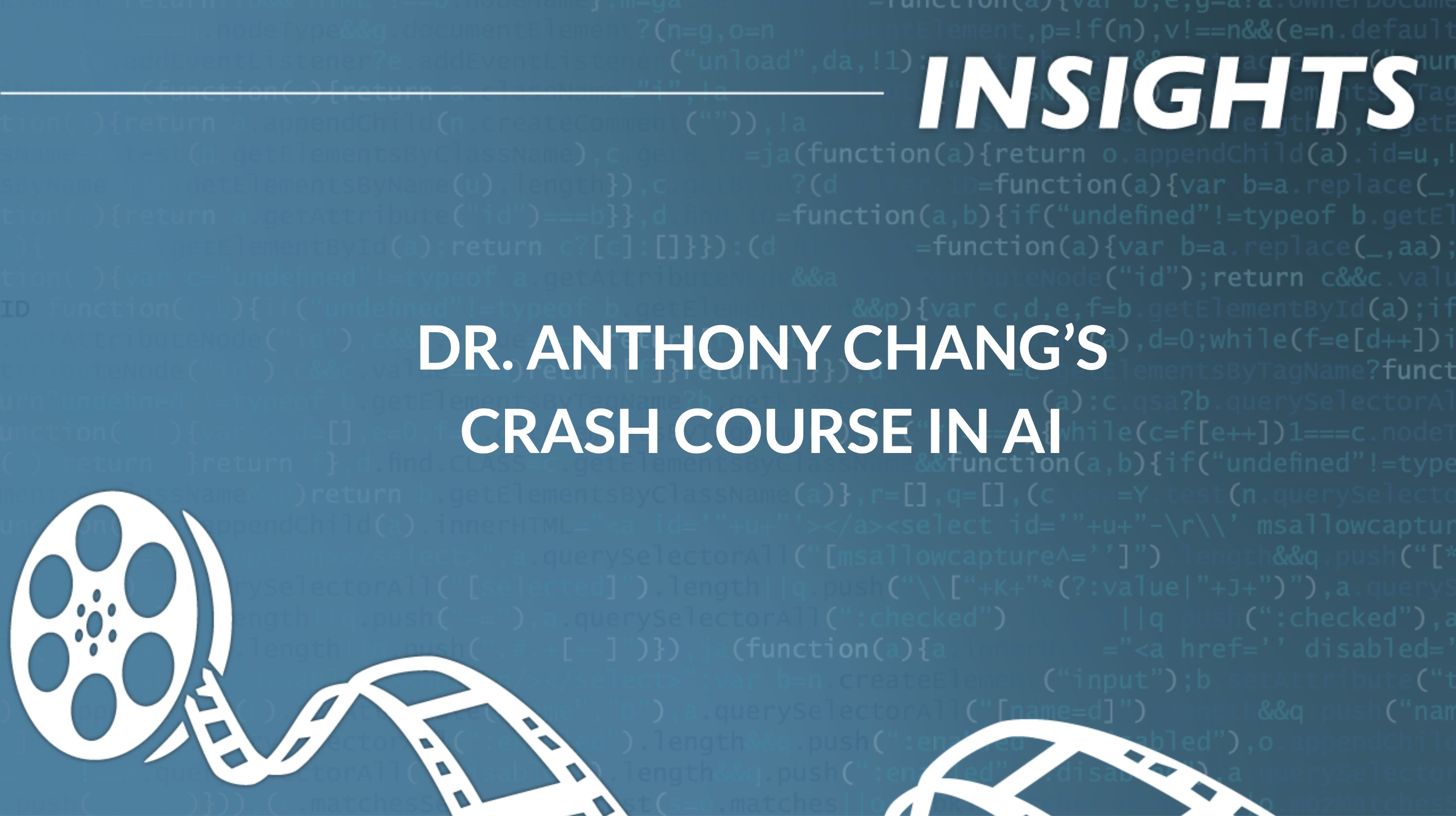 Today on Insights. We go back to a conversation Host Bill Russell had with Dr. Anthony Chang, Founder of AIMed. The topic of discussion was Crash Course in AI. In Dr. Chang’s 30, 40 year career as a Pediatric Cardiologist, there were a lot of data science controversies that had not been resolved. He wanted to start thinking about them in another dimension.

Today on Insights. We go back to a conversation host Bill Russell had with Dr. Anthony Chang, founder of AIMed. The topic of discussion was crash course in AI. In Dr. Chang's 30, 40 year career as a pediatric cardiologist, there were a lot of data science controversies that had not been resolved. He wanted to start thinking about them in another dimension.

Did you all of a sudden decide, Hey, AI's where it's at and I need to know more. And Stanford was the place to go?

Yeah, basically as a Senior Pediatric Cardiologist, I realized from going to meetings and giving talks and writing books on the topic, that a lot of decisions, a lot of the management issues are not always data science driven and that senior physicians tend to espouse their home principles without sometimes data science or artificial intelligence. And a lot of the controversies in my 30, 40 years have not been resolved. So I wanted to resolve them and think about another dimension. As Einstein says, insanity is doing the same things over and over and expect a different result. And I feel like we have thes e debates at various meetings year in, year out, but no one ever resolved them.

And I felt like, well, maybe I should think about this differently. And from a data scientist perspective.

As we start to talk about artificial intelligence, when we really start to bend the paper for people, they, they almost get nervous because things are going to significantly change.

It's overwhelming in terms of what the dividends can be. And I think I know you have a lot of CIOs in the audience and I think 10 years from now we'll be talking about Chief Intelligence Officers and different healthcare organizations and not only Chief Information Officers or that job will be just transformed into someone that understands the intelligence as well as the data.

So if I'm a healthcare leader and I don't know where to go with this, I give you a call. You'll come in and and work with us. You offer a service for healthcare leaders. You're going to bring me and our listeners up to speed. So here we go.

Crash course on AI. I'm going to know everything I need to know. Actually, I looked at the materials on your website. There's no way to know everything there is to know. I see that there's subspecialties and people are really focusing in on cognitive general intelligence.

It's no different than a doctor being a subspecialist, basically so.

Yeah. So we'll, we'll see what we can do. So here's what we're gonna do. I'm gonna play the healthcare executive. And the frameworks going to be three things. One is primer on why AI, what it is, what its potential is.

The second area we're going to look at is where should I be thinking about it and where's it in use today? And then the third is how do I get started and how do I stay relevant in this space? So let's start at the beginning. What's the promise of AI? Why are you so excited about it? Why are you looking at it?

When I think after four years of education, I realized that it's kind of like wearing a different lens and looking at the world. You see so many little places where data science or computer programming can really make impact. And if you think about our world in general, so many facets of our life is, are already being replaced by automation.

And that was the night that I downloaded the application for the data science and AI program at Stanford. I realized that this time AI is here and it's probably going to be here for a long time.

Those stories is just continue. I mean, one of the things you shared was I think I have a picture of this.

Yeah. So, yeah. And I'll put this up on the screen. So how a robot passed China's medical licensing exam?

So it's obviously a robot with what we call natural language processing capability and understanding. So NLP that you hear about a lot is natural language processing or how a computer can understand the human spoken language or written language. And then NLU, which is even more important is understanding. So obviously just like Watson on the show Jeopardy this Chinese robot is able to understand the context and the content of the questions in a medical exam and pass.

But still not ready for, we're not going to put that robot into a clinic and have people go see it just yet.

No. I think again,

I think one of the misconceptions is that AI is all about the robot and it's not helping that the public media is often having pictures of robots and then having an AI headline and what I say, and my intellectual partner Sparrow Moses and I kind of made it up together is that AI is about making the visible invisible So by that, I mean, if you walk into a doctor's office and you sat down, inevitably, that physician's going to be tapping away on a computer. And not paying attention to you a hundred percent of the time. I'm lucky my doctor doesn't do that, but in my exam rooms computers are not allowed in the exam room because I think that's distracting.

So if AI is really good at some point in the near future then the entire conversation, the exam will all be extracted onto the medical record automatically with AI and NLP. And you wouldn't need the doctor tapping on the computer. So it's making those things go away.

Yeah. In the last conversation we had, you likened it to the doctor isn't Sherlock Holmes. It's more like Watson. Right. It's your assistant. It's there to make the invisible visible. Right? So it's going through reams of data, genomic data, whatever the data, and it's coming back and things that you couldn't read if you took a week, it's saying, right.

So that's making, that's sort of the corollary, which is making the invisible visible. So now a medical information is doubling an incredible rate every three to four months or so. So there's no way a doctor can understand all of the medical literature. Pore through all of the patient's record, even if it's just the record in front of him or her.

And then come up with the best decision. So we have to make the invisible visible by data mining and data science.

That's amazing. You gave us three different categories. Just break it down for us so that we can think about it, right. Cause it's not just the robot and the autonomous cars.

It doesn't really interact with humans and it's something that's symbolized by the robotic vacuum cleaner that we have now. It's sort of automatic pilot. It's doing its own thing. The humans don't need to teach it. The intermediate kind of artificial intelligence is something called augmented intelligence.

So that means there's an interaction interplay between the human and the machine. So the example would be something like the book choices that Amazon may have for you. So that's an sort of an augmented intelligence machine learns what you are doing and it teaches itself to relate to you in that way. And then you give it feedback. So it's a constant interaction.

Where does like RPA fall in? So that's like we're actually telling the machine, here's the redundant, repetitive tasks that I normally do.

I think RPA. And it's a very popular term right now. Robotic process automation. RPA. So for the clinicians out there, it's not right pulmonary artery anymore. So, RPA is I think somewhere between the assistant and augmented. I think it's automated in the sense that would just tell me a machine what to do, but there is a little bit of element of learning there.

I think it's mostly automated, but perhaps an element of assisted. And then the third category sort of is the autonomous intelligence category and that's symbolized by the autonomous driving vehicle. We don't have anything like that in medicine yet, per se. So in medicine there's only assisted AI and that's something like a robotic pharmacy service where the robot is delivering medications. Augmented would be some of the decisions, support. Medical image, computer vision type of project. So I think that by far, the most exciting area is going to be in the next decade or two is going to be the autonomous AI in medicine.

I want to thank Tracey for another great episode. If you have feedback regarding the content and materials that you just heard and would like to help us to amplify great thinking to propel healthcare ???? forward, please send us a note [email protected] Thanks for listening. That's all for now. ????