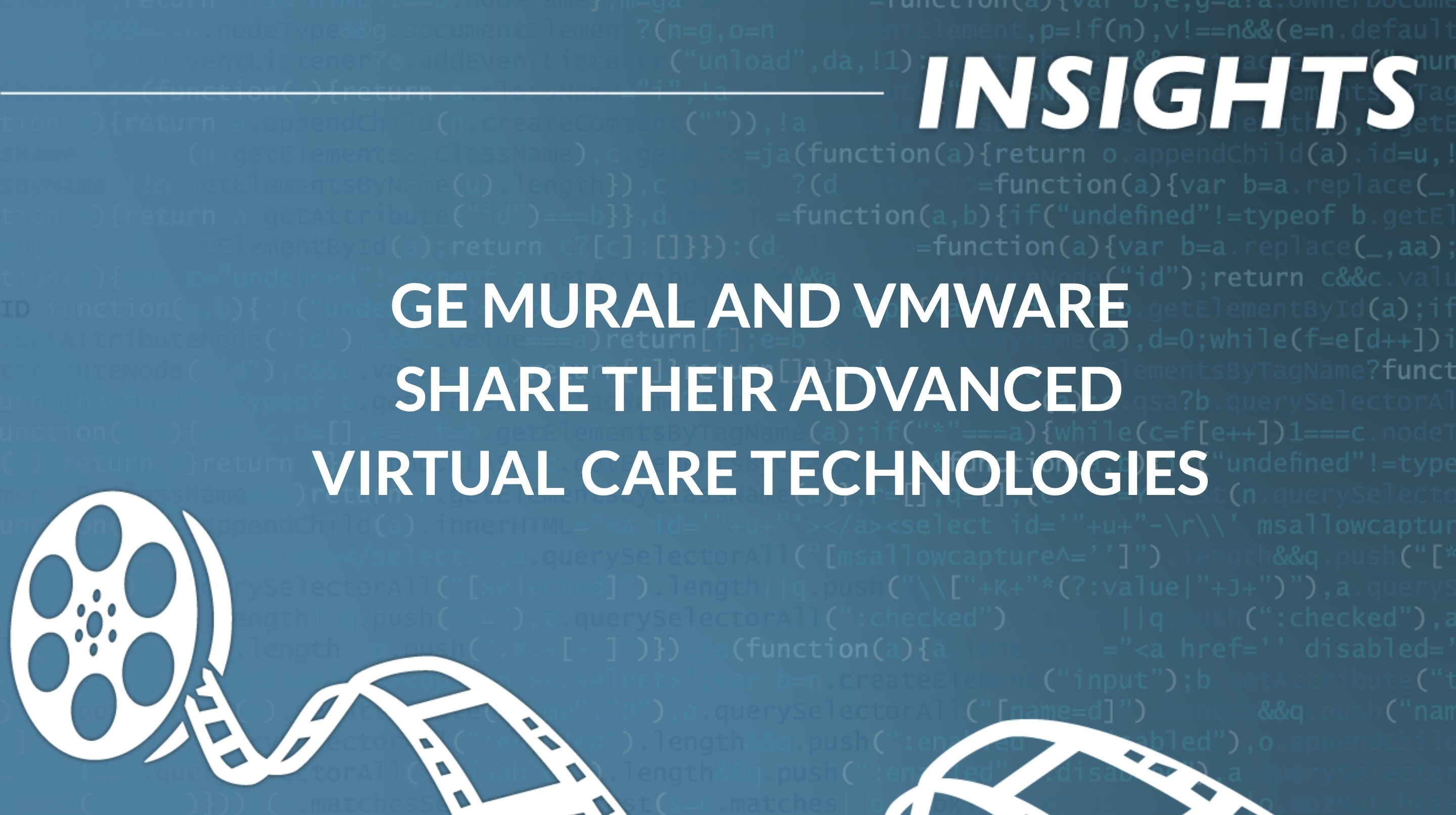 Today on Insights. We go back to a conversation Host Bill Russell had with Paul Jones, Global Director of Product Management for Network and Security Solutions at GE Healthcare and Anand Srinivas, Office of the CTO, Service Provider Edge Business Unit at VMware. The topic of discussion was A Use Case on GE Mural and VMware Virtual Care Solutions. How advanced is remote patient monitoring becoming? The advanced technologies are now mission critical in helping us to understand the patient snapshot.

Today on insights. We go back to a conversation host Bill Russell had with Anand Srinivas, Office of the CTO at VMware and Paul Jones, Global director at GE Healthcare. The topic of discussion was a use case on GE Mural and VMware virtual care solutions. How advanced is remote patient monitoring becoming? The advanced technologies are now mission critical in helping us to understand the patient's snapshot.

This becomes really interesting as we start to step outside the four walls of the hospital, because a lot of people listening to this would go, yeah I already have controls and V lands and I'm doing all this kind of stuff. But like you say, it's retrospective and it's very reactive.

Hey, we have a problem here. Oh, we look at the controls. Figure that out, that kind of stuff. This is software-based deep packet inspection. It's seeing what's going on in the network and letting you know in real time as it's happening. But when we start going outside, we don't have those same controls that we once had on all these devices, but you continue to operate. And so for a use case here, Paul, I'd like to start with you. We looked at the GE Mural solution. I'd like for you to talk about that a little bit, and we'll use that as a backdrop for talking about how the solution would support something like the GE Mural Solution.

Sure. So Mural is a newer solution from GE and it's a virtual care solution. So if we use an example, like let's imagine we have a children's hospital that has a lot of pediatric specialists and now they want to provide a monitoring service for other hospitals, where they might have pediatric patients in their ICU or in different parts of the hospital. And the children's hospital wants to extend its reach within a region by doing remote monitoring.

So Mural is set up where it can receive diagnostic information like imaging. It can receive live audio and video streams of the patients to do remote observation. We can receive EMR data from the remote systems, medical system, and then we can do health scoring with tools that are built in. We can see a patient snapshot and we could see a population surveillance survey of like a summary of patients that we might be monitoring. So all that information could come back through the networks between unaffiliated hospitals. So you might have one that's one brand across town or three counties over, and you got the children's hospital that's doing the observation. So they could have like a war room or a nerve center of people doing that observation. Our next solution came in, like, well, let's talk about the problems in doing that. You've got different kinds of data. Some of it is like near real time actual, like what's happening from the patient monitor. So that's what we typically do on local area networks. We typically don't send that across the land. And then we get things like Audio and video, which could be high bandwidth, high utilization flows, where you want to observe the patient. So you mix all these different types of data together, and you could have some congestion issues where some things block, other things like, especially if you're sending, like send me that latest x-ray and it's this giant file that you need to shove down the wide area network pipe.

So that's where we could have dropouts, we can have unperfect data. So this is where an SD-WAN type solution, like what VMware offers really becomes interesting. And some of the technologies that they, Anand can talk about those in more detail, but by bringing those together, we're able to extend between cloud-based systems, remote hospital systems across hospital networks. Sometimes they have large campuses where they have built medical centers and users in different places. So sometimes they want an overlay network just built over that. So there's some unique technology that we're getting from VMware to put it all together.

I'm listening to that as CIO and I'm starting to sweat. So Anand what are you going to do?

First we got to get you a handkerchief. I'm just kidding. No. What I would say is I think the traditional, again, sort of going from legacy to what we need to do now, traditionally, you would build sort of a a dedicated WAN network, right? You'd go over MPLS or something like that sort of maintains your quality of service. Pay a lot of money for that and try and build out your land network that way to support things like GE Mural. Like the way Paul was, was talking about. But in the modern era, A, that's way too expensive and B, Mural is being built cloud natively in Azure as an example, right? So a solution like that, just isn't optimal. And so SD-WAN comes into play here to sort of guarantee an SLA for people connecting into GE Mural, into a cloud native solution like this reliably over an imperfect or an inherently unreliable WAN potentially. Right. Where we can now start to combine things like MPLS can still exist as one WAN link, but you can also use cable, you can use DSL, you can use satellite, whatever it is, depending on the situation. And the key technology in VMware SD-WAN is something we call dynamic multi-path optimization. And what this does is it creates this overlay network over all of these unreliable links, but it's able to do per packet steering based on if any link fails, it's able to react to that immediately.

If an application requires additional reliability, because say one of the land links starts to become really hopyyc. Right. There's a lot of packet loss or there's heavy latency. It's able to add forward error correction in order to fix that kind of issue. There's another side to the solution, which is in the cloud called the VMware gateway.

And any communication between to VMware SD-WAN devices is protected by this dynamic multipath optimization. So it doesn't matter what underlay you bring to the party, whatever, WAN links you want to bring. The VMware SD-WAN solution is automatically protecting and guaranteeing SLA over that. And that's super important for a mission critical application like GE Mural that has so many different types of data going over it with different types of SLA requirements and things like that. Like Paul talked about.