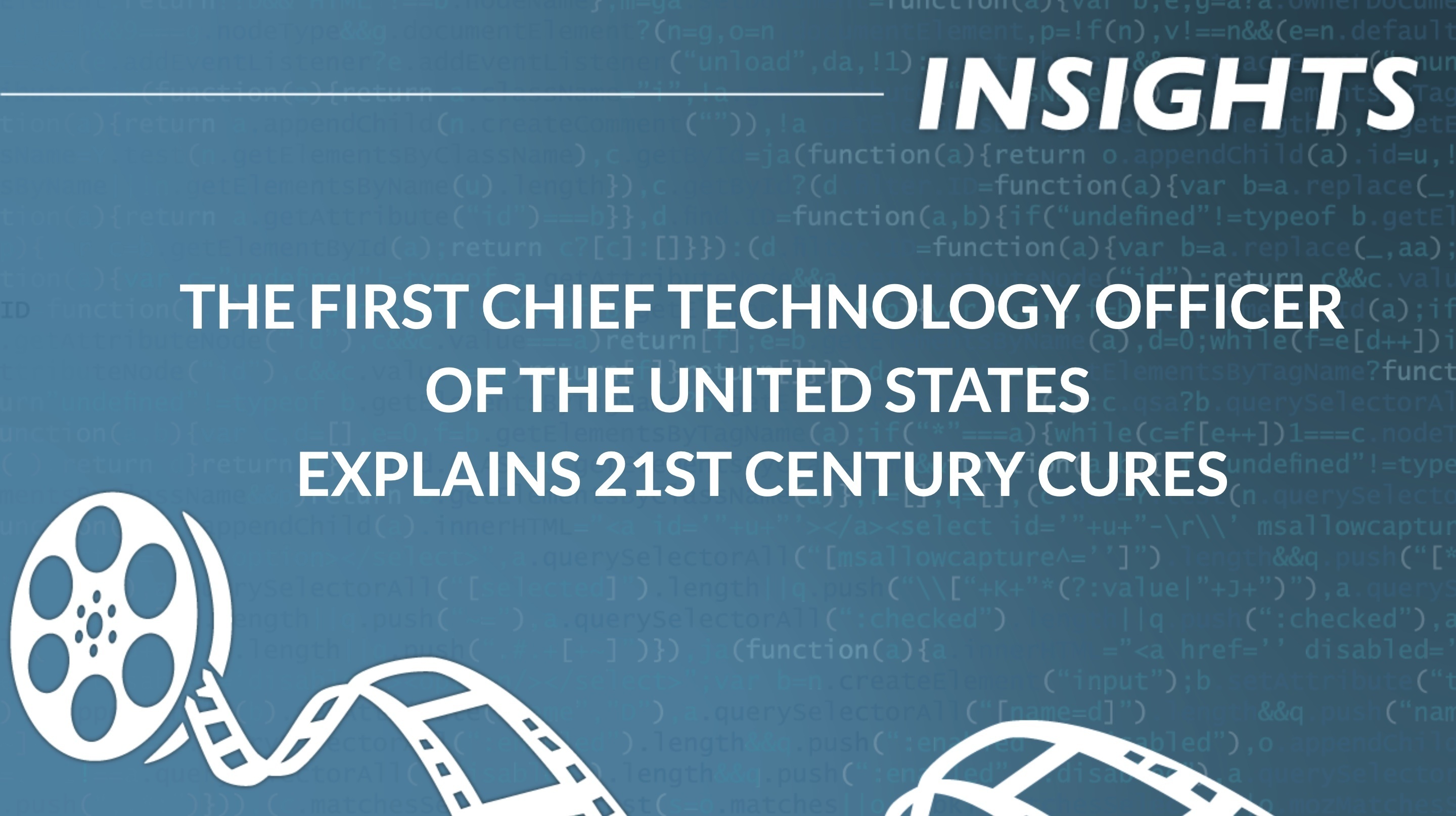 Today on Insights. We go back to a conversation Host Bill Russell had with Aneesh Chopra who was the first Chief Technology Officer of the United States, appointed in 2009 by President Barack Obama. The topic of discussion was 21st Century Cures. And Bill asks Aneesh to run us through it.

Run us through 21st century cures. No one does this as succinctly as you.

It said unequivocally healthcare information. Shall be made available through standardized API APIs and the fancy language that is the hallmark of this law is that the data sharing shall occur without special effort. Think about every HL seven interface you had to launch for a specific project to connect to the HIE, to connect to a third party app, to connect to a whatever Pell health plan.

By the way, an important point, given some of the political debate over the regulations, the congressional leadership did not say pending somebody else's privacy review, the consumer can or cannot actually exercise their rights. They said they have these rights, the right to the consumer, and then effectively by contract to all the other stakeholders.

So Congress made it very clear. That gave the office of national coordinator and the CMS administrator, all the foundation they needed to state the following. We are going to tackle technical and nontechnical. It's funny in international trade bill, they call these non-tariff trade barriers that on paper, you're not actually technically doing something wrong or right, but you're doing something indirectly that's causing harm.

But the good news is we now have a very clear recipe from the cures act, our pace. For achieving the vision of the law of all data to all stakeholders without special effort is constrained to the pace of standards. Consensus. If six CEOs in a room said, this is how we're going to communicate this person's, homelessness at us, we can reach consensus.

Because of the law, we have the ready to take that idea and to make it assessable. And there's no single provision, more obviously central to this than how we got the bulk fire requirement as part of the ONC rules. And we may get into that, as a technical matter, if you wish.

As CIO, I need to pepper you with some questions here. So, I'm a little concerned about getting sideways sideways with my EHR vendor.

It's not like I can switch. So, is there a chance I get sideways with my EHR vendor and what kind of air cover do I have if I decide to be one of the early adopters and push forward.

So if you're the CIO, we're trying to figure out how to release more data. Of course, you're going to go after the consumer notes thing we just talked about, and I don't think you're gonna get EHR pushback. The pushback will be in the more traditional B2B use cases. Note that the CMS rule requires plans.

Government sponsored plans to go live a full year before the ONC rules kick in on fire release for. In a weird way, plans will be live on fire at least for before providers. So the tension I think by design is that it's the plan. That's going to be requesting the data. So if the CIO is concerned about not going sideways, it really is, is the CIO plus a friendly plan, maybe one, and that you're engaged in the value based care contract that wants to do data sharing through API APIs.

That use case is what will unlock. This maybe metaphysical or proverbial jam, and the payers will have enough clout to talk through, you know, litigation risk and everything else as it comes to information blocking. So that's where I would put my time and energy it's payer provider, combo explicitly using the data for value based care. That's the use case that will unlock the data.

So my team's telling me, Hey, no mass. You're killing me. I've too many priorities. We're in the middle of COVID. There's not enough time. They haven't given us, you know, the reprieve isn't long enough. You tell me what the case is for not just taking the EHR provider called and said, Hey, just click this button and you're good. Why not? Why don't I just take that easy way out?

COVID. Look at the reporting burden on all of your friends on the front lines today. They have to integrate the ELR feed, the CCD feed and ADT feed all for COVID positive patients, and maybe even adding a patient questionnaire in the form of basket order questions that task to meet the August 1st deadline of lab results.

Reporting from the cares act is so manually intensive and painful. I believe there's enough pressure building in the system where a good portion of the market is going to say, I'll put bodies at the reporting obligations, but I am willing to make an investment so that I come out the other end with more of an automated answer for COVID and it'll be an acceleration of what I got to do in two years.

Anyway. So this is the calculation. Do I want to go all the way 150% on lab results reporting for COVID and then start from scratch to meet compliance in two years? Is that a better alternative that's the default? That's annoying. Or can I actually just pull forward the technology upgrades and actually solve both problems at once?

I think Bill, we'll see a reasonable path that gets us to an accelerated adoption curve. For a good chunk of the economy.